Skeleton in a Box
Students Build Science Kits from Roadkills 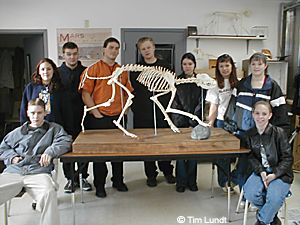 During the past year, road-killed and donated moose, bears and wolves have been de-boned at the Wasilla alternative high school. Science teacher Tim Lundt's anatomy students transformed the carcasses into six polished, re-usable skeleton kits. Three kits - one of each animal - will stay with Lundt's anatomy class, while the other three will be at the Palmer Fish and Game office for teachers to check out.

The "Moose in a Box," "Wolf in a Box" and "Bear in a Box" kits contain stands, bones, detailed instructions and all the tools needed to assemble and disassemble the skeletons.

Jasmine Gray and her anatomy classmates at Burchell can assemble the complete skeleton of an adult cow moose in 35 minutes, but they've had practice.

"A middle school class could make a whole semester out of putting it together," said Gray, a junior. "You learn all the muscles, the respiratory and circulatory systems - with the skeleton you can really tell how everything fits together and how it all works." 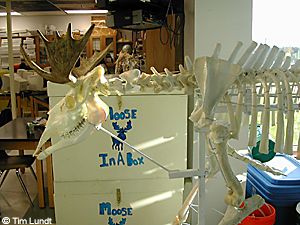 "I had no problem remembering the bones, and I was never very good at memorizing and I go blank on tests, usually," Rose said. "I think seeing them and putting them together a few times and taking them apart - the hands-on is really good."
Burchell High School runs a food bank program, and for years Lundt's students have been butchering donated road-killed moose to provide wrapped meat for local families. Some of the game stays in the classroom, and Lundt teaches food handling safety and microbiology, and students learn how to can meat and make jerky.

Four years ago Lundt's biology class boiled the moose bones, treated them with peroxide and epoxy and articulated a skeleton. Lundt said the influence on some students was profound.

"Their attitude on science changed completely," he said.

Inspired by the success, last year Lundt approached the Alaska Department of Fish and Game with a proposal he called, "Roll up Your Sleeves Science," a curriculum for Alaska teachers that included re-usable skeleton kits of Alaska big game animals. He received funding assistance through the department for the project. 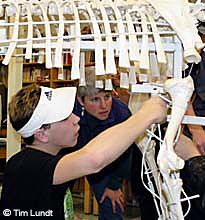 Burchell students in the first stage of preparing the skeletons for the anatomy kits.

In addition to the complete kits, his students produced a comprehensive "how-to" video and CD-ROM package detailing the entire carcass-to-classroom-skeleton procedure.

Sophomore Nathan Jagger said the skeletons tell stories about how the animals lived. One wolf was a radio-collared animal monitored by Fish and Game biologists. He broke the fibula and tibia in his leg, but survived while it healed - and even maintained his status as the alpha male in his pack. After he died, Fish and Game passed the carcass on to Lundt's class, along with the background data. But his skeleton also tells the story.

"You can see how the bones had completely grown back together," Jagger said. "It's pretty amazing how the body can do that."