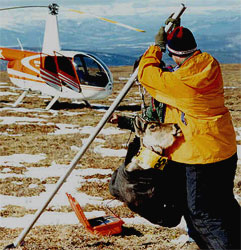 When most people wonder about how global climate change will affect Alaska's wildlife, polar bears and walruses are the animals that typically come to mind.

Some recent research by state and federal biologists, however, sheds some light on caribou, an important Alaskan game species, and how life might change for at least one herd in a warming world.

The research explores connections between the Nelchina caribou herd, lichens and fire, and examines what might happen if warming does lead to increased wildland fires in Alaska’s boreal forest as predicted.

The basic conclusion from the work is that more fire will result in younger forests and fewer fruticose lichens, which grow very slowly in black spruce stands and are an important winter food for caribou.

The research first looked at how old forests needed to be to support lichens. The researchers found that lichens were scarce in forests younger than 80 years old.

They then collared caribou, studied their movements over time, recaptured them at various intervals and examined how well they grew compared to where they foraged. What they found is that after factoring in other considerations such as variations in body size in their early life and weather, those caribou that spent the winters in areas with ample lichens fared better than the caribou that wintered in areas with fewer lichens.

As a result, increased forest fires should result in a decrease in lichens – and poorer caribou nutrition over winter.

Biologists have long known that caribou prefer to feed on lichens in winter. But one surprise from the research was just how strongly caribou avoided younger stands of forest, said Bruce Dale, a caribou researcher from Fish and Game who was the principal investigator for the federal-state research.

“The caribou really avoided any forests younger than 50 years old,” Dale said. “They traveled through but wouldn’t stop to feed until they got to the other side of the burn. They clearly weren’t spending any time in younger forests.”

Dale said the research showed it took 80 years for lichens to regrow in an area after it’s been burned. Interestingly, much of the area has forests about 160-180 years old, which correlates to the end of the “little ice age.” Forest fires must have been more frequent then, Dale said.

One important conclusion of the work is that researchers found, not surprisingly, that lichen distribution clearly affects winter caribou distribution.

Some caribou roamed to select the best lichen stands, Dale said. In a future with more frequent fires that could result in caribou being farther away from where people are accustomed to hunting them now. 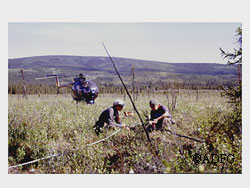 The Nelchina caribou are an ideal herd to study this problem, Dale noted, because the herd’s new northern winter habitat is fairly uniform with rolling hills and black spruce forests with varied burn histories.

What’s more, much of the herd had recently shifted their migration patterns to travel to the new winter range that is richer in lichens than the old winter range.

By tracking the caribou using GPS telemetry and monthly VHF telemetry flights and then measuring the caribou’s body mass at standard intervals, the researchers found that even though some caribou traveled further – as far as 200 kilometers in some cases – they did better if they reached the area with abundant lichens. Those that stayed on the old winter range with depleted lichens did poorer on average. Interestingly, some caribou traveled to the new area, but did not go far enough. Those caribou did not do as well, Dale said.

Those conclusions were a bit of a surprise. The researchers had initially guessed that the cost of making a long trip might cancel out the nutritional benefits of finding more lichens.

“The ones that made the longest journeys did the best,” Dale said. “Caribou move a lot anyway so it didn’t seem to matter. They’re nomads. They feed on the move.”

Obviously, however, winter nutrition is not the only factor that influences growth. The research found that what a caribou ate during its second summer of life turned out to be even more important to their growth than winter nutrition. The researchers did not study how climate change might affect summer forage, but if summer food availability does change with climate change, that could affect caribou as well, Dale noted.

An interesting side discovery of the research was that smaller animals going into winter did just as well as larger members of the herd. They grew faster or lost less weight and some could even catch up to larger caribou of the same age – a phenomenon biologists call compensatory growth.

As is sometimes the case in science, the research began with a slightly different focus. The work was funded in part with a grant from the federal National Interagency Fire Center and was designed at first to look at how fire suppression efforts have affected caribou. 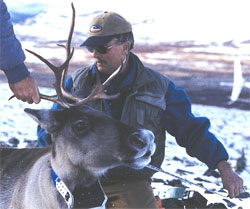 Fire suppression in boreal forests tends to result in older forage that is less beneficial to moose. But, as it turns out, the unburned stands are helpful for caribou, particularly in winter because of the abundance of lichens.

As Dale noted, the current frequency of fires in the new northern winter range has turned out to be fairly beneficial for both moose and caribou. With more fires, however, moose could start to benefit more than caribou.

The field work took place from 1999-2003. The project was conducted by a team of researchers that included Fish and Game biologists Bruce Dale, Bill Collins, Bob Tobey and retired Fish and Game biologist Pat Valkenburg. Layne Adams, Kyle Joly and Gretchen Roffler were involved from the U.S. Geological Survey’s Biological Research Division, as well as Darien McElwain with the University of Vermont.

As the team was finalizing details of the study plan, they realized the connection with global climate change and shared data with Scott Rupp, a University of Alaska Fairbanks researcher who already had been working on modeling how global climate change would affect fire frequency in Alaska’s boreal forests.

By pairing their caribou data to the fire model, the researchers were able to essentially get a snapshot of what the Nelchina herd’s northern winter range might look like in future years.

Elsewhere in Alaska and Canada, climate change is hypothesized to be affecting caribou in various other ways in addition to the connection with lichens. Some scientists believe that climate change may result in heavier snowfall in some regions that could then change migration patterns and cause some caribou to give birth to calves outside the more protected calving areas. Warming climate is also expected to increase parasites that can affect behavior, condition, and productivity of caribou.

On the plus side, some areas may experience an earlier greenup, providing better food for caribou during calving, a critical time for growth. But on the other hand, warmer temperatures could also lead to drier vegetation in late summer. Warmer weather might also mean more insect activity, which could result in more discomfort for caribou and less feeding time.