The Bou are Bunchin!
Counting the Largest Caribou Herd in Alaska 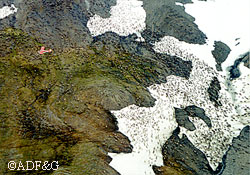 Thousands of caribou bunch up during the most recent census. The orange Fish and Game Supercub is visible on the left. Peter Bente photo.

How to count the state’s largest caribou herd? First it’s a matter of timing. Then patience. Jim Dau, Fish and Game's Kotzebue area biologist has studied the Western Arctic Caribou Herd for more than 20 years. He knows approximately where and when the mosquitoes, warble, and bot flies will drive the caribou to the coast and then into ever-tightening groups, bunching up to expose less surface area to the onslaught of insects. Every two to four years, Dau rounds up a herd of biologists and a small air force of pilots, and whisks them off to a remote site in the middle of northwest Alaska’s nowhere. Weatherports go up, gear gets unpacked, temporary food shelves are stacked, water cans are filled, and a small community of biologists begins to wait.

In July 2007 the crew was within striking range of the caribou, waiting for the animals to form their defensive aggregations. The biologists hope for conditions they know they will dread: weather hot enough to produce hoards of insects; calm enough that the insects drive both the caribou and the biologists mad; and in the right combination so the coastal fog doesn’t roll in and obscure everything.

Dau flies daily reconnaissance flights in a Piper Cub to check on weather and herd conditions and to radio-track the fragmented groups of caribou scattered over several hundred square miles. The big, orange Fish & Game Beaver waits beside a field of cotton grass, a large format U.S. Geologic Survey mapping camera tucked in its belly, with its dinner plate-sized lens focused straight down. The biologists double-check their radio tracking equipment and maps, haul water from the creek, chop ice from late-lying snowfields to keep their food cool, reapply bug dope, and wait for word from Dau that it is time to fly into action. 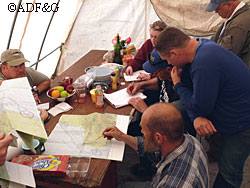 Planning and staging the caribou census in field camp in July 2007.

It takes almost ten days but finally the call comes in, “The ‘bou are bunchin!” and within minutes the entire crew is airborne. Dau directs the Beaver crew to one group after another. The Beaver’s pilot flies a slow and steady grid over each bunch as the camera snaps sequences of overlapping photos. Another Piper Cub and a Cessna 185 locate the remaining far-flung groups of caribou, radioing in their location to the Beaver, or counting the smaller clusters by eye. It is a laborious amount of flying with only brief and infrequent stops to refuel, grab a bite to eat, and relieve oneself. They took to the air at two in the afternoon, and wrap up all but a few groups by four in the Arctic morning. Fourteen hours and the first part is done.

Next, film canisters the size and weight of a small television set are sent off for processing and several months later almost 500 9”x 9” black and white photos arrive. Once again a small army of biologists gather, this time in Nome’s Old St. Joe’s civic center with bright lights and magnifiers. Soon dozens of photos are spread across tables as the topography of the caribou groups is reconstructed, and lines drawn on photos to eliminate any overlap. No caribou should be missed or counted twice. 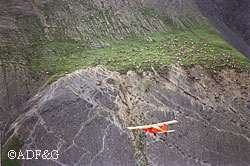 Hundreds of caribou dot the trails and the green bench on the hillside during the census.

And then the counting begins. ADF&G contracts with Don Williams of Ambler to do the counting. Don will spend eight hours a day, from the dark of January until the spring light of March, peering through a magnifier at each of the photos and counting. Each and every caribou, hundreds of thousands of animals. One by one – except for the two-headed caribou which are actually cows with a calf tucked closely beside them. It is tedious work but Don loves it. He has done most of the counting for the last three Western Arctic Herd population censuses - enough times that he’s beginning to feel he knows each animal personally.

Advanced minds and technology are searching for a better method for counting all the caribou on the photographs, but so far no computer-based technique has proven more reliable and affordable than the human eye. And this arrangement brings income into a village in the heart of the caribou range, and frees the biologists to continue their work with moose, muskoxen and other game animals.

The Western Arctic Caribou Herd was last photographed and counted in 2003, and the total was about 490,000 animals. No one knows what this year’s count will tally. In the meantime the caribou, oblivious to the efforts being made to count their numbers, struggle to survive on their winter range. Don sits in the dark of the Arctic winter and counts. And the biologists again wait patiently.

Sue Steinacher is an educator with the Alaska Department of Fish and Game in Nome.