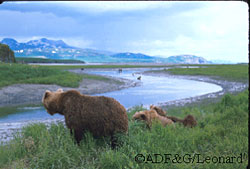 A sow and cubs in the McNeil area

Every summer, bears gather at McNeil River, creating the largest concentration of wild brown bears in the world. This congregation is carefully managed by the Alaska Department of Fish and Game as a premier wildlife viewing site. Several hundred permits are issued each year allowing about 10 people at a time to spend about four days in the area during the summer months. The deadline for applying for permits is March 1.

The McNeil River area was designated as a wildlife sanctuary in 1967, and enlarged it in 1993. As many as 144 individual bears have been observed at McNeil River through the summer, with as many as 72 bears observed at one time.

The sanctuary protects about 200 square miles of wildlife habitat and is located about 250 air miles southwest of Anchorage and 100 air miles west of Homer. This is a roadless area with no modern amenities and it is virtually undisturbed by human development. All visitors, about a dozen at a time, stay at an established camp with three Fish and Game staff.

About one mile upstream from the beach, a series of rocks and boulders forms McNeil River Falls. Salmon congregate there during their upstream migration to their spawning grounds. During June, a smaller number of bears (generally 15 - 20) are attracted to nearby Mikfik Creek by migrating sockeye salmon. During this period, visitors observe bears from a variety of sites on or near the creek while the bears catch fish and graze on tidal vegetation.

The access permit program was developed after many years of excessive and uncontrolled public use of the area that often put people and bears in danger. The goal is to provide the public with an opportunity to view and photograph bears while minimizing their impacts to bears and wildlife habitats. The program limits the number of people who may be present at McNeil River Falls (or the other viewing locations) to no more than 10 individuals at a time between June 7 and Aug. 25.

No one has ever been injured by a bear at McNeil River and since the permit program was initiated, no bears have been killed by visitors who felt threatened. To maintain this record, visitor activities at the sanctuary are closely managed and evaluated.

The following access permits are available to visit the sanctuary:

Guiding Viewing Access Permits: Formerly known as "Regular" permits, these are drawn in a lottery in which all applicants have an equal opportunity of being selected. Applicants may select a first and second choice for the four-day time block to visit the McNeil River Sanctuary during the period of June 7-Aug. 25. A total of 185 individual permits, each valid for a four-day period, are available through this lottery. Applications must be submitted by March 1.

Biologist Joe Meehan is the lands and refuges program coordinator. He said 97 percent of the people on standby get to spend at least one day out at the bear viewing site. “The vast majority go for two or more days,” Meehan said. “There’s often very good viewing around camp, or on the beach. Or out on the McNeil Lagoon Spit.”

Application must be made by March 1 online. Mailed applications must be at the Alaska Department of Fish & Game by March 1. Application forms are available on line at http://www.adfg.alaska.gov/index.cfm?adfg=viewinglocations.mcneilriveror by calling 907-267-2182.

There is a non-refundable application of $25 per person. Applications are entered into a lottery. If drawn, by May 1 residents must pay a $150 viewing fee and non-residents pay $350