Evolution of an Angler 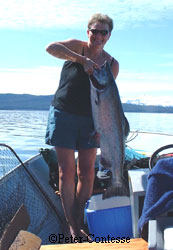 The author with a nice king salmon, her first boat-caught fish.

Growing up in the Seattle area, my family spent nearly every weekend hiking and camping in the Cascade and Olympic mountains, my parents instilling in me a love and respect for nature. But it wasn’t until my teens that I experienced the excitement of catching my first fish, when a friend of my parents took me fishing on a creek up near Snoqualmie Pass where I caught and released a small trout. If you’ve ever caught a fish, you know the thrill of feeling the line go taut and the satisfaction of landing it. He showed me the ropes, rejoiced with me, and gave me the rod and reel to keep.

I didn’t fish again in Washington state, but years later I moved to Juneau, bought a casting rod and started fishing off the rocks at the Shrine of St. Therese and on North Douglas Island. Using pixies and the lure de jour, and whatever I could glean from the ‘experts’ out there, I caught Dolly Varden, pink, coho and the occasional chinook salmon. The meditative motion of casting and reeling captured and calmed me and I spent many rainy days on the rocks soothing my soul.

In 2000 my good friends enticed me out in their 17-foot skiff for some chinook and coho fishing. I used their extra fishing gear, slapped together some warm clothes and rain wear, grabbed my kayak PFD and jumped aboard. Each spring I became increasingly excited as May 1st approached, the first day they could get their skiff into the harbor. We spent hours together, talking, solving the problems of the world, watching whales and birds, and living for those bursts of excitement when the line went taut and we coaxed a king into our net. With thanks and a toast to the fish, we celebrated living the good life. 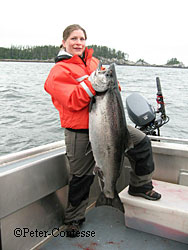 Each year I added another piece of equipment to my fishing stuff, a float coat, my own fishing rod (which I promptly broke while leaning over the side of the boat to net a fish), reel, tackle, waterproof bag, etc. In June of 2006 I went on my first fishing charter in Sitka with a group of friends from Sport Fish division. It was an amazing day, in which we all caught our limit of chinook, coho, halibut, ling cod, yellow eye and several other species of rock fish. It could have spoiled me for Juneau fishing, but it didn’t.

This last year a friend taught me to tie my own leaders, another meditative exercise requiring practice, patience and accuracy. I appreciate that the knots and slip ties on my rod were tied by my own hands, and take great care to ensure they’re sound.

I have been quite blessed by the generosity of friends over the years; introducing me to fishing, showing me the ropes, and taking great pleasure in sharing their love of the water, nature and the joys of fishing. Each year I became progressively more obsessed with fishing, pestering people with boats to invite me out, and becoming more impatient because I couldn’t get out more often. Last summer this little idea of having my own boat started forming in my mind, but I quickly quelled it with practical thoughts (costs too much, I don’t know enough about running a boat, don’t have the time, etc.). Then on a walk one day I saw the perfect boat, a 17-foot skiff with a canvas enclosed cabin, small enough for one person to handle but big enough for me and my fishing pals. 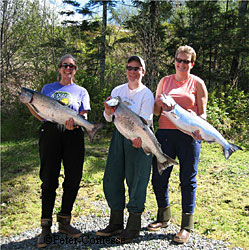 Sarah Felix, Diane Larocque and Fabienne Peter-Contesse on a three king day in Juneau, May 2006

Not two days later I mentioned to the owner how much I liked his boat and he said there was one for sale just like it. That boat now sits in our garage waiting for spring! I am beyond excited to get out on the water – I have signed up for the Coast Guard boating safety course, I have several coworkers who have generously offered to teach me what I need to know to safely run the boat, and I’ve spent hours sitting out in the garage with her dreaming of the days to come.

It has been a gift from so many who have shared their love of this sport in a respectful and safe manner that has taken me from fishing neophyte to avid angler over the years, and to them, and the fish, I offer a toast!

Fabienne is a 26 year Juneau resident, avid hiker and angler, and works for the Division of Sport Fish in her spare time.