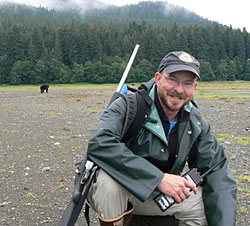 As a new Pack Creek ranger, Carl Koch found that his 17 years as a paramedic in New Jersey paid off when it came to reassuring nervous visitors.

“We had sows with cubs within 20 feet of us, not everyday, but they get ridiculously close,” he said. “My background with emergency medical services was really helpful – it was important to stay calm and keep a cool head with bears in close proximity.”

Koch was in no danger of panicking. But visitors to the popular brown bear viewing area were sometimes overwhelmed. Koch said it was not uncommon to find a visitor in a group who had been talked into the bear-viewing day trip by a spouse or friends – and who was terrified by the big, unfettered bears. Koch kept them cool using the same approach that worked with in emergencies with accident victims and their families – calm, reassuring dialogue and competent control of the situation.

Last year was Koch’s first season at Pack Creek, part of a team of four rangers (two from the Forest Service, two from Fish and Game). 2007 was his first year of employment with the Alaska Department of Fish and Game, and it was a dream come true in many ways. Based in Douglas, Koch worked throughout Southeast Alaska.

“I’ve been on the job six months and I’ve been to all the ABC Islands (Admiralty, Baranof and Chichagof), Zarembo and Kuiu,” he said. “I’ve seen brown bears, marten, moose, wolves and more black bears than I ever thought I’d see in my entire life on Kuiu.”

Koch, the oldest of three kids, grew up a mile from the Atlantic Ocean. He lived in New Jersey his whole life, but that’s not to say he didn’t travel. “My dad was a high school teacher,” he said. “In the summers, we’d rent out the house and take off on cross-country camping trips all over the West.”

Koch started working as a paramedic in 1990, and also served as an emergency medical services educator training other paramedics. In New Jersey, there are two kinds of responders, depending on the severity of the medical emergency; an ambulance staffed by EMTs, or a Mobile Intensive Care Unit staffed by paramedics. 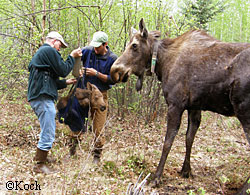 Carl Koch and Tom Lohuis (Director of the MRC) at the Moose Research Center weighing a moose calf while mom looks on.

“We were treating people from all walks of life – one call could be a child birth, the next a CPR,” he said. “You could be called for an overdose, and in some neighborhoods, when we got close we shut the lights down. If they thought it was police coming they’d throw rocks at us.”

It was stressful work, but it had its rewards. “Most people burn out pretty quick, I guess I lasted longer than most,” he said. “The reward is you’re making a difference in people’s lives, sometimes saving lives, alleviating suffering, and restoring calm to an uncontrolled environment.”

Koch began studying biology around 2001 while continuing to work. He liked medicine and considered becoming a physician’s assistant, but he was also drawn to wildlife biology. The basics – chemistry, math and biology – were the same for both, and in 2003 he decided to focus on wildlife.

“In one course an instructor highly recommended the Wildlife Society, so I joined, and came to Anchorage for a conference in 2006,” he said. The conference included a field trip to the Kenai Moose Research Center. Tucked into rolling hills in northwestern Kenai Peninsula, the farm-like facility is an hour’s drive down back roads from the small town of Sterling. Koch asked Director Tom Lohuis if he needed an intern. He was willing to work for just room and board, and there was work to be done at the rural facility.

In January of 2007 Koch drove from New Jersey to the Kenai Peninsula. The research facility is known to many at Fish and Game as simply, “the moose pens.” Four fenced enclosures, each a mile square, are home to about 20 moose, some quite tame. Over the past 40 years, more than 250 scientific papers have been published drawing on research at the facility. Fish and Game biologists Stacy and John Crouse live on the premises and work closely with Lohuis. 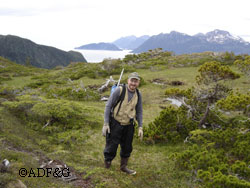 Carl in the subalpine country of Baranof Island on an early summer deer pellet survey.

“I felt like I won the lottery just being able to volunteer,” Koch said. “It was a lot of hard work, physically demanding, but working with John and Stacy and Tom, it was like a wildlife academy.”

He shadowed the researchers and learned the routines. Some of the research involves drawing blood, working with drugs and sedating animals, and requires a good feel for monitoring the condition of the “patient.” Koch knew how to do that.

In April, as the snow was beginning to melt, he discovered that brown bears occasionally get into the moose pens. He was watching three moose, and they seemed nervous. Suddenly all three simultaneously urinated on their back legs, a big-time sign of stress.

“I knew a predator was out there, and now I could hear branches crunching,” he said. “I started talking loud to the moose, and then I see this brown furry ear in the bushes. I started hollering, and the moose broke into a run. The bear gallops after the moose, then sees me and turns and runs toward me. He stops about 70 feet away and I’ve got the pepper spray out with the safety off. He figured I wasn’t a moose and high-tailed it away.”

Koch was destined to see a lot more brown bears. By May he had a permanent position as a wildlife technician with the Southeast region. With the Pack Creek duties as the centerpiece of the position, he found that he had a variety of opportunities to help research and management biologists with their work in Southeast. He worked on deer pellet surveys in the Juneau and Sitka areas, and in the fall he was trapping and collaring marten. This winter he’s doing data entry for the Southeast deer research.