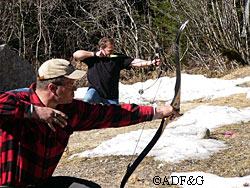 Bowhunters in Alaska must pass a proficiency course with classroom and marksmanship components.

Archery hunts in Alaska require that bowhunters have passed a bowhunter safety and proficiency course. The class, “Today’s Bowhunter,” is now available online.

“Archery-only hunts are becoming fairly popular,” said Jerry Soukup, the program coordinator for hunter education with the Alaska Department of Fish and Game. “Many of the hunts are in urban areas, or on military lands. To participate in those hunts, you have to be certified prior to applying.”

“Today’s Bowhunter” developed as a national program over the past 30 years. In the 1970s, members of the National Field Archery Association (NFAA) developed an education program that focused on hunter safety and proficiency for bow hunters. The program, known as the International Bowhunter Education Program (IBEP), was improved and fine-tuned over the years, and eventually became one of the largest components of the archery organization. In 1979, with the blessing of the parent organization, the education component became a separate and independent group, the National Bowhunter Education Foundation (NBEF).

“This is a national program, and we accept certification from any other state that has it,” Soukup said. “You complete the first portion at home on computer, then there is a field component. There’s also the traditional method that’s not online, you come in pick up packet, study at home, and then come in for test. The field component same for both, and involves a blood trailing exercise, shooting proficiency, and safety issues.” 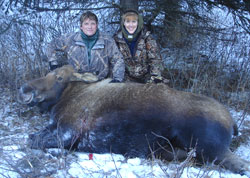 A successful bowhunt: Kirk and Dana Lingofelt with a Fort Rich moose, taken in December.

“I think a lot of people are going to jump on this option,” Soukup said.

There is no charge to take the course or the practice tests, and the $20 course fee payment is made online when it’s time to take the real test. If you pass, you get a certificate, and are qualified to take the field component within one year at a variety of locations. There are no additional fees. In Alaska, there are a dozen opportunities to take the field test in 2008 between late March and early August – five in Anchorage, five in Fairbanks, and two in Juneau.

Lee Rogers, who works with the hunter education program, is a beginning bowhunter and went through the course as part of pilot group.

“The online portion was very comprehensive,” he said. “It took quite a bit longer to go through than I anticipated, about six hours on the computer. I took the practice test, they recommend taking it three times, and first time I got a 78, and you need an 80 to pass. I thought, ‘These guys are serious,’ and I took it again, twice more and got in the 90s. On the real test I scored in 90s – I highly recommend taking practice test as many times as needed until you feel prepared.”

The classroom component of the bowhunter course is now available online.

“This class is not a shortcut to the classroom experience,” Rogers said. “It’s in-depth. It’s another way folks are learning – through the internet – and it’s a great delivery system. There will still be instructor contact at the field day. They’re going to cover a lot of the Alaska specifics at that time.

Rogers said to prepare for the field test he practiced two or three times a week for six weeks, shooting 30 to 40 arrows each session. “Twenty rounds a practice might be better, my shoulder hurts,” he said.

“So I’m certified,” he said. “I will go bowhunting, I’m looking at a Fort Rich hunt, or possibly some of the early moose seasons.”

The course is available at the ADF&G hunter education home page,
http://huntereducation.alaska.gov and click on the bowhunter ed link.