Ask A Wildlife Biologist:
Do Bears Really Sleep All Winter? 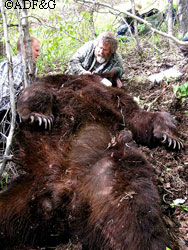 Q) Do bears really sleep all winter? Do they need snow to build a den? Also, how is their behavior affected when it’s a warmer than usual winter?

A) Bears hibernate during winter, but aren’t sleeping the whole time. Hibernation for bears simply means they don’t need to eat or drink, and rarely urinate or defecate (or not at all). There is strong evolutionary pressure for bears to stay in their dens during winter, if there is little or no food available. But bears will leave their dens on occasion, particularly when their den gets flooded or is badly damaged. Weather does play a role. In the colder, northern parts of Alaska, bears hibernate about 7 months of the year. Bears in the warmer, coastal regions of the state hibernate for 2-5 months, with the longer hibernation time for bears raising newborn cubs.

Bears have developed unique adaptive strategies in order to survive for so long without food and water. They lower their body temperature 8-12 degrees, and they break down fat stores for energy. Some protein is used as well, but bears largely conserve their muscle mass and thus do not become appreciably weaker during hibernation. Bears do wake up, however, and move around inside the den. It’s kind of like your dog sleeping. Bears will go through a lot of posture changes where they wake periodically to shift around. It is thought this helps prevent pressure sores from developing. Bears also shift positions to better conserve heat. If food is present a bear does not have to hibernate, unless it is pregnant or winter conditions are severe enough (such as found in Alaska).

Cubs are born about two months into hibernation but aren’t able to walk or feed on their own until they are about six months old. The den is a safe environment for the cubs as they grow. Bear cubs are classified as altricial young rather than precocial, which means they need considerable parental care before they are able to leave the den. Not all bears hibernate, but in Alaska, most bears do, including the males. 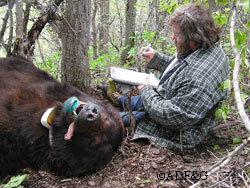 Farley records information on an immobilized bear. The bear was later released unharmed.

Our Alaskan brown/grizzly bears and black bears den more consistently than polar bears. It is not uncommon for male polar bears and polar bears that are not pregnant or with young to remain active through periods of low food availability.

Bears in zoos will not hibernate if food is available, though they will slow down and sleep more than usual. Some zoo bears are fed year round, and do not hibernate. Since they do not undergo a winter weight loss like wild bears, some zoo bears can get very overweight, which is very unhealthy. Fortunately more zoos are allowing their bears hibernate during winter. Though it makes the animals unavailable for viewing, it helps the bears stay leaner and healthier.

Bears do not need snow to make a den. In fact, some bears may not dig a den at all. In one famous Pennsylvania bear study the researcher found bears denning in road culverts, underneath home porches or simply curled up on a nest of leaves. But if the weather is unpleasant bears will make a shelter by digging, crawling into the root structure of overturned trees, or using rock caves. In Alaska and elsewhere that might have large cottonwood trees that have hollow centers, black bears love to crawl up the outside of the tree, then back down into the hollow center. If the bear is denning in dirt or a cave, snow is not required but it does help form an insulating layer.

What is the difference between a brown bear and a grizzly bear?

Grizzly bear denning in the arctic