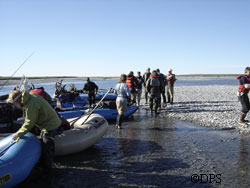 Trp. Dennis Roe checked caribou hunters in rafts on the Ivashak River on the North Slope. No violations issued to this group and they were all wearing PFDs.

Alaska Wildlife Troopers took to the skies and waterways of the North Slope in August and September of 2007 to keep an eye on moose, sheep and caribou hunters.

The troopers were checking on hunters in what D Detachment Commander Lt. Lantz Dahlke calls, “The most beautiful country in the world.” A handful of troopers patrolled an area north of the Brooks Range roughly the size of Minnesota, making sure hunters followed hunting and boating guidelines. The operation ran out of Happy Valley, an old pipeline construction camp located at mile 334 of the Dalton Highway, 84 miles south of Prudhoe Bay.

Enforcement efforts included a helicopter and pilot, Trp. Dennis Roe, fixed wing pilots Trp. Andy Evarts, Sgt. Scott Quist, and road patrols by Trp. Mike Potter and Lt. Lantz Dahlke. They each went out on 12- to 14-hour patrols and met back at the camp each night. Dahlke estimated the group had anywhere from 50 to 100 contacts with hunters daily within their large area of coverage. 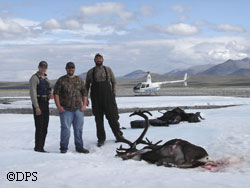 This article first appeared in the Fall 2007 issue of the DPS quarterly, an online publication of the Department of Public Safety.