By Megan Peters and Jason Ball 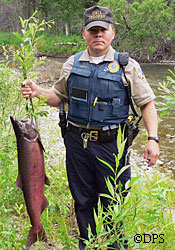 AWT Thomas Akelkok holds up king salmon he seized and turned over to charity after catching a boy fishing in waters only open to trout fishing.

Within minutes he was standing behind the four men. They already had two kings and were casting for another go-around. It didn’t take long for them to figure out they had been caught breaking the law.

“I got ‘em on camera,” Akelkok said before coming out of the woods to talk to the anglers.

This particular Saturday, Akelkok was patrolling popular fishing spots along the road system. Akelkok is based in Big Lake, west of Wasilla, but Wildlife Troopers from across Alaska came into Southcentral to assist in checking the fishing permits of thousands of fishermen. The sport fish enforcement effort in Southcentral Alaska began on June 18 and ended July 10, followed by fishery enforcement in the Bristol Bay area.

The special enforcement netted 416 resource-related tickets, ranging from taking fish in closed waters to not having a valid fishing license. Anglers who were not following the regulations had to forfeit their fish to the state. The forfeited fish were then donated to charity.

Wildlife Troopers also gave out 300 warnings. The beefed-up patrol also caught a few non-resource related offenders including a DUI arrest, disorderly conduct and a few warrant arrests. Overall in 2007, Alaska Wildlife Troopers made 4,634 contacts with the public in their enforcement efforts across the state.

Troopers say it is amazing that many of the fishermen take their citation with a smile and a response of “thanks” for those brown shirts patrolling the Southcentral waters. One happy-go-not-so-lucky fisherman held up his illegal fish for a picture – as proof to his buddies that his son caught a beautiful fish – before it was whisked off to be dinner for a needy Alaskan. Some violators even pass on tips of where they saw other fishermen breaking the law.

Boat Officer Amanda Barnette helps out with the patrol of commercial fishing in the Bristol Bay area in July.

Troopers were out 24 hours a day. Patrol trucks, unmarked trucks, fixed wing aircraft, river boats and a helicopter were used by 14 Alaska Wildlife Troopers and Public Safety Technicians. Patrols included undercover or in plain clothes and stake outs during the two month-long effort. The enforcement stretched from Ship Creek in Anchorage to the creeks and rivers near Talkeetna for the first portion of the patrols.

In July the Alaska Troopers converged on the Bristol Bay area. Bristol Bay is located several hundred miles Southwest of Anchorage and can only be accessed by airplane or boat. Bristol Bay is, among other things, home to the world’s largest sockeye salmon return. The rugged landscape is filled with hundreds of lakes and streams drawing thousands of hunters, fishermen, and tourists every year. The large return of salmon in Bristol Bay attracts commercial fisherman from all over the world, who arrive every summer to harvest the salmon.

The Alaska Wildlife Troopers recruited numerous additional troopers from around the state, resulting in the largest enforcement program conducted annually by the Department of Public Safety. AWT had 41 people involved in the effort, including troopers, public safety technicians, clerks and boat crews. The troopers had several patrol vessels including the Stimson, Woldstad, Kvichak and several department patrol skiffs. In addition AWT had two state aircraft used for aerial patrol.

Additionally, this year the troopers joined forces with the U.S. Coast Guard in a combined effort to educate and enforce boating safety laws for the commercial fishing fleet that numbers over 1,500 vessels. This collaboration led to a record number of commercial fishing vessel exams conducted, and increased the overall safety of the fleet.

Trooper Jason Ball said this was a phenomenal year for the fleet of commercial fishermen in terms of the number of sockeye salmon that returned to their spawning grounds. This was especially true for the Nushigak District, where they had the second biggest return of salmon since 1983, just shy of eight million fish. This was also the case for the Naknek/Kvichak District which had its largest return since 1999 with almost six million sockeye salmon. The return Bristol Bay-wide was well over 20 million sockeye salmon.

The patrol area encompassed all of the commercial districts including the Naknek/Kvichak, Egegik, Nushigak, Ugashik and Togiak districts, Ball said.