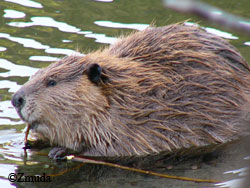 Beaver trapping was extremely important in the 1800s. Today beaver rank fifth in Alaska, after marten, wolf, wolverine and otter. A beaver pelt fetches about $30. Photo by Frank Zmuda.

The cold, dark heart of winter in Alaska is the trappers’ time. Their observations and experiences provide remarkable insight into wildlife in Alaska.

Every year the Alaska Department of Fish and Game gathers comments and information from trappers and publishes an annual summary of trapping in Alaska. It’s called the Trapper Questionnaire, but it’s really the results of a questionnaire completed by trappers. It details trapping methods, trap lines, trapping effort, animals targeted, and the disposition of furs. It also features reports by biologists about trapping and the status of furbearers in different parts of Alaska.

Almost a quarter of the 70-page book is dedicated to comments from trappers, a forum for kudos, complaints, high and low points, problems and insights. “The comments are always the most interesting part,” said wildlife biologist Karen Blejwas (pronounced Blayvis), the Trapper Questionnaire coordinator. “They are not shy about sharing their opinions.”

Some examples: “We had an unusually high bycatch of flying squirrels in marten sets – 40 compared to usual 2-5,” reported one interior Alaska trapper. “Too many road trappers with no respect for established lines,” was the gist of a frequent comment. Two Southeast trappers reported that fisher are now present in the Taku River area. The fisher is a large weasel that has only been documented three times in Alaska.

Close to 50 percent of trappers who respond say they take a youngster with them on the trapline at some point during the season, Blejwas said. “There are definitely some families out there trapping together.”

One trapper wrote, “Life is always better outside. We wonder why fewer youngsters are interested in the outdoors, well, from the time they can sit up they are in front of the T.V…maybe the playpen should be outside. Maybe (their) hands should be cold from the snow and their heads wet from the rain. Maybe they should sleep under the stars with an old dog and sit around the fire with mom and dad…I will always trap…it’s not about the fur, it’s the feeling of being outside and being free.”

Trapping season varies by area and species, but generally starts mid November and winds up in April. The middle of winter is when pelts are prime and when most trapping is done. Timing can change from year to year, especially with lynx because their population cycle so dramatically.

A beaver swimming in a slough off the Chena River near Fairbanks. Riley Woodford photo.

The publication is important to wildlife managers, Blejwas said. “It’s pretty much the main source for Fish and Game about trapping in Alaska, and the status of furbearers in the state.”

Some animals in Alaska require sealing – that is, the hide and skull are brought in to a fish and game office for inspection, and a seal is affixed to the pelt. This allows biologists to collect some information on harvest levels and furbearers. This includes lynx, wolf, otter and wolverine, and in some areas also includes marten and beaver. “For fox, coyote, mink, muskrat, weasel (ermine), and squirrels, we don’t require sealing, so this questionnaire represents our information,” Blejwas said.

Marten is the most important furbearer in Alaska. The fur is called sable. Prices for furs vary season to season, and within species by quality. In 2005-06 the average price paid for marten in Alaska was $81, and top fur fetched $120. Fur buyers paid Alaska trappers more than a million dollars for marten alone in the 2005-06 season.

Other furs are valuable, but trappers must balance the amount of work involved trapping and skinning the animal against the price paid. The average price for a wolf pelt was about $210, but skinning a wolf is a lot more work than skinning a cat-sized marten – especially if it’s frozen solid on a remote trapline. A lynx pelt fetched about $150, a river otter about $80, beaver about $30, and mink about $15.

Many of Alaska’s trappers keep most of their fur, but overall, trappers sold more than two million dollars worth of fur in the 2005-2006 season. One Interior trapper reported that marten, wolverine and wolf fur is sold at auction, but beaver is tanned at home and made into parka ruffs, mittens and hats. He reported that 30 percent of his family’s income, sometimes more, comes from the trapline.

“There’s a huge range of trappers,” Blejwas said. “The majority is recreational trappers, the second largest group traps fairly seriously, and then there are a small number of individuals who trap a lot of animals.” 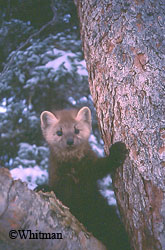 Marten are the most important furbearer in Alaska. The fur is known as sable. Photo by Jack Whitman.

Blejwas said it’s difficult to determine the number of trappers in Alaska. Between 600 and 700 trapping licenses are issued, and another 15,000 low income licenses are issued each year which includes hunting, fishing, and trapping. Some Alaskans buy the three combo license (hunting, fishing, and trapping) to support the department, and hunt and fish but don’t trap. People under 16 are not required to purchase a license.

Trapper’s comments bemoan weather conditions, gas prices and lice on wolves, but the most pervasive complaint is competition from other trappers, in particular inexperienced trappers or trappers new to an area. A trapper with a long history in an area may “rest” a drainage or trapping area for a year or two to let the furbearer populations rebound, only to find a trapper new to the area has set up a trapline. That can’t happen in Canada, but in Alaska, it’s up to trappers to resolve those conflicts.

“In Canada trappers register their trapline and claim exclusive use of an area,” Blejwas said. “In Alaska you can’t do that, and real conflicts can arise when a new trapper moves into an area someone may have been working for decades.”