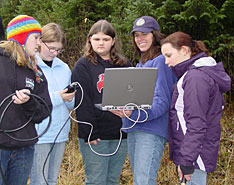 Kristen Romanoff and a group of students track a collared black bear.

KRISTEN ROMANOFF is based in Juneau and her work focuses on Southeast. Juneau and neighboring Douglas are built on prime bear habitat and urban bear issues plagued these communities. Early this decade city police and fish and game received more than 1,000 calls each summer – about a dozen every night – about bear problems. Bears were shot, property was damaged, and thousands of hours were spent chasing bears around town. But bears weren’t the cause of the problems; people and trash were the problem.

Part of Kristen Romanoff’s work, especially early on, was educating people to be better neighbors to bears. She developed partnership with local organizations, city and federal governments, and schools in Juneau and Sitka. But she’s gone way beyond addressing trash problems and bear safety. She’s involved students in bear research, tracking bears with GPS collars and developing ArcView maps. The work of Romanoff and others has vastly improved the situation in Juneau, and that work is shared with other communities.

She earned her undergraduate degree in Environmental Studies from the University of California, Santa Cruz and her Masters Degree in Science Education from Antioch University. “Before migrating north to Alaska (in 1992), I lived and worked in remote field stations in Oregon and northern Minnesota, banding tree swallows, digging up fossils, tracking bats fitted with radio transmitters and mucking around in the rivers and lakes with children and adults of all ages.”

A couple of years teaching science in public schools showed her teaching science in an outdoor setting allows students to make connections that simply cannot occur within the confines of a classroom. Her work as a naturalist and teacher with Discovery Southeast enabled her to teach outdoors. She came to Fish and Game in 2003.

Romanoff developed a lecture series about the ecology of the Mendenhall Wetlands, working with local biologists and naturalists; and she’s worked on tools for hunters including a mountain goat identification quiz, and brochures on ethical brown bear hunting and moose hunting in antler restricted areas. Another publication she developed is “Skulls of Alaskan Mammals: A Teacher’s Guide,” which accompanies skulls available from ADF&G for loan to educators. 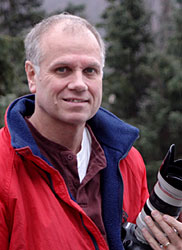 Romanoff has worked with marbled murrelets, a robin-sized seabird that’s listed as an endangered species in the Lower 48 and Canada. These birds are locally abundant in Juneau waters, which is home to the world’s greatest concentrations of marbled murrelets. This year, Romanoff published “Marbled Murrelets of Southeast,” a full-color booklet presenting the natural history, biology, research and conservation of these fascinating seabirds. The booklet is available at ADF&G offices, on board small charter boats and at lodges around SE, and at local libraries.

She’s also developed Murrelet Watch: A Citizen Science Monitoring Program, which provides an opportunity for private citizens to assist biologists in gathering information about the distribution and abundance of marbled murrelets in Southeast Alaska. During its first year, over 30 volunteers from Juneau, Wrangell, Sitka and Ketchikan participated in the program.

“When not working, I enjoy exploring the soggy waterways and airy mountaintops and everything in-between, with my husband, Andy and two fantastic children, Elias and Marlena.”

JOHN TYSON is the newest member of the team and begins work this month as the Project WILD coordinator. He will work from the Anchorage office but will coordinate the program statewide. He moved to Alaska two years ago from Florida, where he was a high school science teacher at the ALEE Academy, a charter school in Umatilla, Fla., where he was able to use the school’s extensive grounds for hands-on science learning. He served on the board of a new nature center and in the past, has worked as an educator at Disney World in Orland. He is also an accomplished wildlife photographer and writer and graduated from a training program for Florida naturalist interpreters. He has written a book, “Homes and Shelters for Backyard Birds,” and has written numerous magazine articles over the years. In Anchorage, John has been busy working on a new hiking guide for Chugach State Park due out next year. His wife is a teacher at Winterberry Charter School in Anchorage. They live in Eagle River. 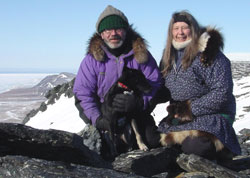 SUE STEINACHER is an artist, writer and biologist based in Nome. She studied vertebrate biology and art at Oregon State University, and first came to Alaska decades ago to work as a wildlife technician.

“As an Alaskan wildlife technician I got to wrestle fur seals in the Pricilla’s, squint at Brooks Range grizzlies through a spotting scope for days on end, and chase madly after Aleutian Canada Geese at the end of the chain, among other adventures. In between field positions I painted, chopped wood, hauled water, and explored the North from the back of a dog sled.”

She landed on Little Diomede in the mid-eighties to monitor the walrus harvest. She embraced the lifestyle and sensibilities of the region. Her position as an educator and outreach specialist at Fish and Game allows her to combine her wildlife background with her passion for writing, and her art sensibilities. One example is “Caribou Trails,” a publication about caribou and caribou hunters which she produces.

Steinacher said one of her goals is with Fish and Game is to build greater understanding and cooperation between Fish and Game biologists and the people from Bethel to Barrow whose lives, identity and social well-being are tied to the animals we manage. “It also has allowed me to resettle in Nome – this time with running water and a wonderfully supportive husband who is as enamored of the land, sea and people of the Bering Strait Region as I am.”