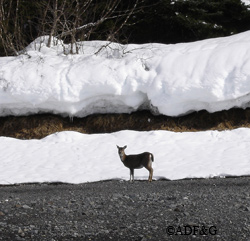 Deer like this one on northern Chichagof Island faced snow nine feet deep above the high tide line in March and April. Deer fared much better in Southern Southeast Alaska for several reasons. Riley Woodford photo.

Predators and weather make the southern part of the Alaska Panhandle a very different place for black-tailed deer than the northern half of the region.

Although deer were hit hard on some mainland areas and on the very northern portion of Prince of Wales Island, overall the effect of the winter was relatively mild.

Snow depth and persistence was less severe. Another factor played a big role in southern Southeast: there are fewer deer. Deer populations in Southern Southeast simply don’t get as high as they do on the ABC Islands - Admiralty, Baranof and Chichagof Islands.

“The absence the main predators - wolves and black bears - makes it a totally different system,” Porter said. Key predators such as wolves on Prince of Wales Island (commonly referred to as POW) keep the deer density consistently lower than on the ABC islands.

“So the deer population is buffered a little bit against hard winters on POW,” Porter said. “Deer numbers don’t fluctuate as much. The deer there (on the ABC islands) are at or near the carrying capacity for that range, whereas on POW we’re well below it.” 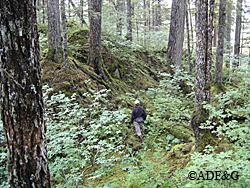 “We’re at a 12 to 14 year high for deer right now,” he added. “Although that doesn’t get anywhere near the high deer density numbers of Unit 4 (the ABC islands).”

Hunters harvest 8,000 to 9,000 deer every year from the ABC Islands, and between 2,000 and 3,000 each year from southern Southeast. 350 to 450 deer are harvested each year in the Juneau area, Unit 1C, and the vast majority of those are taken on Douglas Island.

The Southeast mainland is simply not a good deer producer compared to the islands of Southeast.

“Harsh winters are the limiting factor on the mainland,” Porter said. “Deeper, more persistent snow like we had last year really sets the bar. The mainland is a weather driven system. It doesn’t matter how much food you have in the summer, the bottleneck is really peak winter habitat conditions.” The amount of food available to deer and access to those resources determines carrying capacity, or how many deer the range can sustain.

“What really buffered deer in many areas of southern Southeast last winter was they had enough breaks between hard spells that deer could move around between patches,” Porter said. “That’s very different from deer being confined to the same area for three or four months.”