If you talk to anglers in Southcentral Alaska, you will inevitably hear stories about lakes that used to provide good fishing for rainbows and salmon – that is until northern pike were introduced. This is the problem with northern pike in Southcentral. They destroy fisheries.

The northern pike is actually native to most of the state, but it does not naturally occur south of the Alaska Range except for a small population near Yakutat. Pike are top-level predators in aquatic food chains, and they reproduce quickly. In Southcentral, populations of trout, salmon and other fish have not had time to adapt defenses against pike’s predatory tactics. Here, the northern pike is an invasive species capable of causing tremendous amounts of ecological and economic damage.

The northern pike is a popular and valuable sport fish in its native range. The desire for a local pike fishery is what likely prompted the first illegal introductions to Southcentral. It’s suspect that pike were first introduced to the Susitna River Basin in the 1950s. Since then, they have spread throughout an area roughly the size of Indiana. ADF&G Sport Fish Division biologists in Palmer have confirmed their presence in over 70 lakes and 30 streams, and there are many other places they suspect pike will eventually be found. In Anchorage, pike were introduced to several urban lakes including Sand Lake and Cheney Lake. According to Dan Bosch, Sport Fish Division’s assistant area management biologist for Anchorage, Cheney Lake used to be one of the most popular rainbow trout fisheries in the city before pike were introduced. Plans are currently in the works to try and remove pike from this lake and restore the once popular rainbow trout fishery.

Pike have also been illegally introduced to the Kenai Peninsula. Pike have been found in the Moose River and Soldotna Creek. They are already established in 12 lakes, and their presence is suspected in at least 12 others. Their continued spread on the Kenai could damage areas of pristine wilderness and severely impact some of Alaska’s most valuable fisheries. 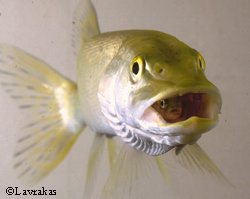 A trout is swallowed by a captive pike. Photo courtesy Lavrakas.

So what makes northern pike so problematic? They are voracious predators and eat anything from waterfowl and small mammals to juvenile salmonids and, eventually, each other. Pike prefer shallow, slow-moving, weedy areas. The vegetation provides cover for juvenile pike to grow, and adults can hide there before ambushing their prey. In Southcentral, coho, sockeye, and chinook are the most common salmon species, and juvenile salmonids occupy the same habitat as pike. They rear in shallow, vegetated lakes or slow back waters of creeks for a few years before going to the ocean as smolts, and are vulnerable to pike during this entire time. In areas of Alaska where pike are native, lakes tend to be deeper, and other fish can avoid pike by seeking refuge in the deeper open-water. Also, pink and chum are the predominant salmon species north of the Alaska range, and these species migrate to sea as soon as they hatch, making them available as pike food for a much shorter time.

When pike are introduced to a lake in Southcentral, they eventually consume all of the juvenile salmon and trout. When the salmon and trout are gone, they start cannibalizing each other. Eventually the large pike are harvested by anglers or die, and the remaining pike population consists of “hammer-handles” – small pike that won’t grow because there is no longer a prey base to support them. This pattern has repeated itself over and over in Southcentral lakes, many of which used to be stocked by ADF&G. When pike become established in a stocked lake, ADF&G often has to stop stocking it. It is too expensive to supply fish that will end up as pike food instead of providing the angling opportunities they are intended to.

ADF&G is working to restore these fisheries by eliminating pike where possible and trying to prevent their spread. Each spring and fall, ADF&G removes pike from lakes in the Mat-Su area, Anchorage, and the Kenai Peninsula using gillnets. This method has definitely reduced their populations, but it isn’t going to get rid of all the pike. 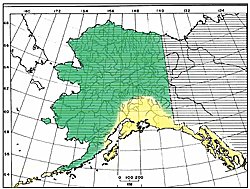 Area of Alaska where pike are invasive (yellow). They are native to all areas in green.

With funding from the U.S. Fish and Wildlife Service Aquatic Nuisance Species Program, ADF&G recently completed a management plan for invasive northern pike which can be viewed online at http://www.adfg.alaska.gov/static/species/nonnative/invasive/pike/pdfs/invasive_pike_management_plan.pdf
The management plan explains ADF&G’s protocol for pike eradication and describes some of the removal methods that may be considered. ADF&G is encouraging public feedback and comment on the invasive northern pike management plan. You are welcome to read it over and let ADF&G know what you think.

There are other things you can do to help, too. ADF&G has liberalized sport fishing regulations for pike in Southcentral. There are no bag limits, and you are allowed to use other harvest methods such as bow, spear, or five lines when ice fishing. Always be sure to check the sport fishing regulations for the water you’re fishing before wetting a line. You can help reduce pike numbers by harvesting as many as you can eat or donate. You can also help spread the word that pike damage our fisheries. Lastly and most importantly, you can keep our fisheries healthy by not putting any live fish, pike or otherwise, into any water body and not moving fish between water bodies. This is highly illegal in Alaska and is a class A misdemeanor. If you witness someone other than ADF&G stocking personnel putting fish in a lake or stream, or catch an unusual fish, for example something you have never caught in that place before, please report it right away to your local ADF&G office or call Fish and Wildlife Safeguard at 1-800-478-3377.