Caribou Calves and Oil Development
Do They Mix? 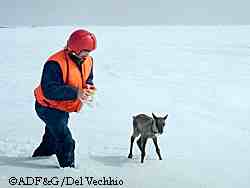 One thing’s certain about day-old caribou calves. “They are incredibly cute,” says Steve Arthur, a biologist with the Alaska Department of Fish and Game in Fairbanks.

Arthur and his research partner, Patricia Del Vechhio, have gotten up close and personal with newborn calves of the Central Arctic caribou herd each June since 2001, in an effort to address an important question: What is the effect of oil field development on wildlife?

Arthur says data they have collected suggest that when cows are displaced from preferred calving areas, their calves are smaller at birth and may not grow as fast or survive as well. It’s an important finding because some of the calving and summer ranges of the Central Arctic caribou herd overlap areas of oil development on Alaska’s North Slope.

The herd’s size increased from approximately 5,000 caribou in 1975, about the time development began, to almost 32,000 in 2002. But Arthur says no easy answer can be gleaned about whether development has affected the herd from looking at changes in the overall number of caribou, because many factors affect growth or decline of caribou populations. Previous researchers have drawn contradictory and controversial conclusions about whether and how much caribou are affected, he said.

When the study started, the Alaska Department of Fish and Game (ADF&G) and other management agencies had been encouraging oil field developers to minimize impacts and activities in calving areas, but wanted better data. “My interest is in trying to cut through some of the controversial aspects of some of the previous work that has been done and come up with something concrete and measurable,” Arthur said. The goal has been to identify and measure the mechanisms through which development disturbance might affect the caribou population, such as by reducing body condition, reproductive success or calf survival.

The Bureau of Land Management and ConocoPhillips contributed major funding for the project, and the National Park Service and U.S. Fish and Wildlife Service also provided support.

Arthur and his team spent five years measuring calves, and radiotracking cows and calves, to learn more about such things as preferred calving areas, feeding ranges, and calf survival. Each year, they captured 60 to 65 calves during the two-week calving season in June, fitted them with radio collars, weighed them and measured metatarsus (lower leg bone) length. These calves were then located by radio signal every two weeks through October, and the following March and June, to find out how many calves survived. Calves were captured, weighed and measured when they were three and nine months old. Over the course of the study, 58 cows were fitted with Global Positioning System (GPS) collars that provided locations for them every five hours from May through October, and every two days from November through April. 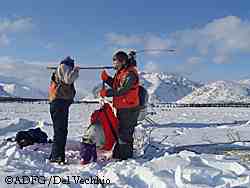 The work was exciting, but it wasn’t easy. The team had to hope for good flying weather during what could be a somewhat wintry and blustery June. It was important, Arthur says, to measure calves within a couple of days of their birth. Having some older than others would make it difficult to compare data. Also, at three days old, calves can run pretty fast, making them difficult to catch. The newborns were caught by hand – the helicopter landed, Arthur or Del Vecchio jumped out, grabbed a calf, collared and measured it, and then left as quickly as possible so its mother, watching from nearby, could return.

Netting rather than drug-darting was used to capture older caribou because animals from the herd are an important food source for residents of the area. Skilled net-gunners leaned from low-flying helicopters to release the nets. Caribou caught in the nets were then hobbled and blindfolded to calm them and again, the process of collaring, weighing and measuring took just a few minutes before the caribou were released.

In their recently published interim research technical report, “Effects of Oil Field Development on Calf Production and Survival in the Central Arctic Herd,” Arthur and Del Vecchio compare what happened to calves that were born in two different calving areas, an area that is in a mostly undeveloped area east of Prudhoe Bay, and an area west of Prudhoe Bay that has seen increasing development since the late 1980s. In the western area, calving has shifted south since development began, though the researchers point out that it is unclear if the shift resulted from development, increased herd size, or other factors.

The researchers found that newborns from the western area on average weighed a little less and were slightly smaller than those from the eastern area, and that these differences persisted through at least the first nine months of life. They also found that calves that were heavier in September were more likely to survive the following winter. However, statistically, survival rates did not differ between the areas – depending on the year, 53 to 87 percent of calves that were alive at the end of the calving period survived to the end of their first year. The researchers say it is hard to detect small differences in survival rates, and other research has shown that small differences can have significant effects on caribou population trends.

Arthur and Del Vecchio conclude that the differences in size and mass of calves may be largely influenced by the quality of habitat and forage available to cows during the calving period. “Thus, displacement of caribou cows from preferred calving habitats may reduce fitness and survival of calves,” they wrote. 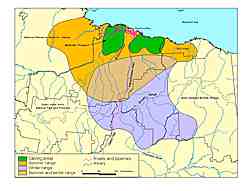 A look at part of the range of the Central Arctic caribou herd: green indicates calving areas, yellow is the summer range, purple is the winter range and the brown area in the center is the summer and winter range. Prudhoe Bay is red area at top center.

As oil exploration and production continue, the approach set out in this research may help to provide solid answers to the question of whether development does or does not adversely affect caribou populations. Arthur and Del Vecchio explain it this way in their interim report: “If further increases in levels of anthropogenic disturbance cause caribou to reduce their use of preferred habitats, it should be possible to detect effects of these changes by measuring birth weights and growth rates of calves. If similar changes do not occur in less-disturbed areas, then this may be taken as evidence of possible effects of disturbance.”

Del Vecchio is headed back to the field this June to take final measurements on calves born in 2006, and to recover radio collars used in the study. Then, she and Arthur will take another look at the data and write their final report.

The study collected lots of data. So, when they’re finished with the project report, Arthur, Del Vecchio and others will look at other ways to use that data. Arthur says the techniques to analyze GPS data have not kept up with the ability to gather it, so they may be developing new techniques. They hope to look more closely at where caribou move and what habitat they use in relation to oil field infrastructure.

Dave Yokel, wildlife biologist with the Bureau of Land Management, said he’s looking forward to that sort of analysis. “We hope we can use the results to mitigate any impacts on the Teshepuk (caribou) herd from development in the NPRA (National Petroleum Reserve Alaska),” he said. To do that, the BLM needs to know more about the impacts on caribou of movement through infrastructure.

Looking back over his experiences in the field, Arthur says he is struck by the resilience of the calves. “The thing that impresses me is how these little calves are so helpless and weak and they’re born in these really harsh conditions – and yet most of these little guys still make it.”

To see the entire interim research technical report, “Effects of Oil Field Development on Calf Production and Survival in the Central Arctic Herd,” go to:

Patti Harper is an editor and writer with the Division of Wildlife Conservation in Juneau. She has worked as a journalist, broadcaster and freelance writer and lived in Juneau, Anchorage and Bethel.