A Day in the Life of a Moose 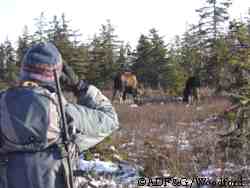 Wildlife biologist Stacy Crouse carefully observes the feeding activity of a cow moose and her calf near Gustavus in Southeast Alaska. Photo by Riley Woodford.

Biologist Stacy Crouse stood a few dozen yards from the big cow moose and her calf, scrutinizing their activity through binoculars. Without taking her eyes off her subject, she repeated one word over and over.

Crouse was counting every bite of food the cow moose was taking, and I was recording her observations on a hand-held computer. A stopwatch was ticking, the type of forage was entered, and this particular subject was logged in.

It was late February and wind had blown most of the snow off the Gustavus forelands in Southeast Alaska. The hungry moose was eating horsetails, a low-growing plant not usually exposed in winter.

Crouse is researching moose nutrition, and these moose are ideal candidates. She’s based at the Kenai Moose Research Center near Soldotna, and often works with tame moose, bottle-raised subjects that tolerate close human contact. There she’s able to closely observe moose foraging throughout the year. She’s developed the methods she uses to measure how much food moose eat and learn how much nutrition and energy they derive from their food. She’s examined the closely cropped shrubs in the field to learn how the herbivores impact their food sources – and how this influences future foraging.

This Gustavus work with wild moose is related to a suite of other moose studies initiated by state biologists Kevin White and Neil Barten. Alaska Department of Fish and Game researchers have captured and radio-collared about 30 moose on the Gustavus forelands, and White and Crouse examined these animals in the fall. They are comparing their condition before and after winter, hoping to better understand how moose survive winter. They are also monitoring the vegetation, to see how the habitat survives the moose.

When Crouse can get close to the moose, she records what the animal is eating and how long it spends chewing on it. When she can’t, she looks at general activity.

“It's basically a day in the life of a moose,” she said.

After an hour of foraging, the moose and her calf bed down and Crouse logs them in as “resting.” It’s a cycle for the moose during winter, feed and rest, feed and rest. The resting is largely digesting, as bacteria and protozoa in their digestive tract break down the dry willow twigs and horsetail stems, providing a fraction of the energy these moose need to get through the winter. The remainder is supplied by fat and protein reserves the moose put on last summer and fall. 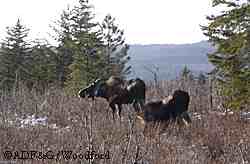 A moose calf "kneels" down to reach low-growing horsetails while mother feeds nearby. Photo by Riley Woodford.

“As often as I can, when I can get close enough to see them actually harvesting bites, then I’m recording every bite they take,” she said.

Then she can go back and see how many bites they harvested in what amount of time. But she goes even further, and measures the bite size to learn how much biomass the moose are removing with each bite. She knows the quality of that bite, and she can calculate their nutritional intake per unit time of foraging.

“Those are the kinds of things you wouldn’t know unless you were watching them actually harvest the plants,” she said.

Moose began colonizing this coastal area near Glacier Bay National Park in the late 1960s and the population grew rapidly. Biologist estimate 400 to 500 moose live in the area, a density approaching five moose per square kilometer. Judging from their body condition and productivity, and their impact on the habitat, it looks like that number is close to the maximum carrying capacity. It’s a dynamic system influenced by a variety of factors including the condition of the forage and how the vegetation responds to browsing, the impact of predators, the productivity of the moose, and the weather.

The Gustavus moose hunt is popular with hunters in northern Southeast Alaska, and the harvest has been liberalized recently. An antlerless hunt has taken place every fall for the past several years in addition to the regular hunt for bull moose.

“They have an overabundance of moose here and the Department is trying to reduce it, to bring body condition and productivity back up,” Crouse said. “This population appears to be nutritionally limited.”

Crouse said her research ties in nicely with the management objectives. “As the herd size is reduced – and as I’m observing these animals forage – we can see if the population’s condition is changing as the herd size goes down. Are we seeing a response in productivity and body condition and nutritional intake? Then we’ll get a better idea what the potential carrying capacity of the area is – how many productive moose it can support.”

Crouse has worked with moose on the Kenai Peninsula and in Southcentral Alaska, and said the Gustavus population’s behavior is unique. 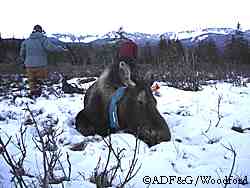 “You have such a high concentration of moose in such a small area in the forelands, and it’s so accessible. Plus the tractability of them, they’ll tolerate me watching them. Not all of them, but there’s a few that’ll let me watch them.”

In summer, moose disperse over a wide area that includes Glacier Bay National Park to the north and west and portions of the Chilkat Mountain Range to the north and east. But in winter, the population favors the low elevation areas near the community of Gustavus, and the moose concentrate on the forelands. Crouse has identified nine or 10 moose that tolerate her presence and behave normally, and she’s focused on those.

“I don’t want to watch an animal where I’m influencing the behavior, that defeats the purpose,” she said. “I want animals that will carry on as moose and behave naturally.”

In winter, the animals tend to group together where the forage is good, and sometimes that creates an unfavorable dynamic.

“It really depends on who they’re hanging out with,” she said. “Sometimes they’ll get in a crowd with a skittish moose and one will run and then they all tend to run.”

Early in winter, moose mainly eat the toothpick-size twigs of willow, the growth from the previous season and the most nutritious part of the plant. As winter progresses, the moose return and eat the pencil-size twigs and small branches.

“They come through and really annihilate the willow community here,” Crouse said.

During the next bout of foraging, biologist Kevin White arrives with a capture kit and dart gun. At dusk, as the cow prepares to bed down again, White sedates her and the two researchers carefully examine her. An ultrasound provides a look at the layer of fat under her skin. They take samples of blood and tissue and swap out her tracking collar for one with fresh batteries.

A reversal drug is administered, and within a few minutes the cow is on her feet again. Her calf, watching from a nearby in a patch of shore pines, rejoins her and the pair amble off into the growing darkness.