A winter bird feeder in Alaska can be a magnet for winged wildlife, and chickadees are one of the most easily recognized and familiar visitors.

Noticeably smaller than the little gray juncos that often share the feeders, chickadees can be recognized by their distinctive triangular white cheek patches, bordered above by a dark cap and below by a back bib.

Chickadees are fairly common in Alaska, and all three species are curious and relatively tame. They look similar, but are found in different regions of the state. Black capped and boreal chickadees favor the Interior - they have a gray back. Southeast Alaska has the coastal variety - their reddish-brown cousins, the chestnut-backed chickadee.

Black-capped chickadees are familiar to folks across Canada and the United States, as they range across northern North America from Alaska to New England (the black capped chickadee is the state bird of Maine and Massachusetts). Boreal Chickadees, as their name suggests, range across Canada, the northern part of the continent. Chestnut backed chickadees are much less widespread and mainly inhabit a strip of the West Coast from Southcentral Alaska to Central California. 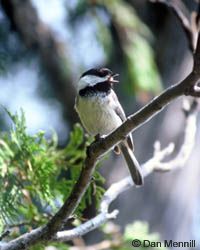 In summer, pairs nest in cavities they line with animal hair, plant fibers and moss. In winter, the pairs group up, often with unrelated juveniles, to form small flocks of about a dozen birds. Members of a flock normally return each evening to a certain patch of trees to roost overnight.

At the bird feeder, chickadees will alight, fly off with a seed, and return, again and again. They're stashing those seeds. To prevent squirrels and other raiders from cleaning out their food cache, chickadees will hide each seed in a different place. It's called scatter hoarding, and these tiny birds will remember the location of each hidden seed for weeks to come.