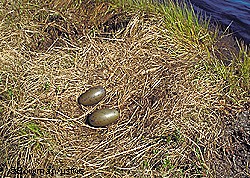 The nest of a Pacific loon along the shoreline, Photo by Tim Bowman, U.S. Fish and Wildlife Service

From his home along Wasilla Lake, Jack Randall has seen boat wakes swamp bird nests, watched watercraft run over bird nests and even witnessed grebes ditch their eggs into the water when people ventured too close.

Randall, a longtime Alaskan who has written a book about red-necked grebes, worries about the future of Mat-Su waterfowl when he sees those things happen. Yet he remains hopeful that education could help change people’s behavior around nesting birds.

From talking with boaters who have disturbed waterfowl, Randall has found that most boaters don’t even realize they have caused harm.

Tony Kavalok, Mat-Su area biologist for the Alaska Department of Fish and Game, said the problem of boaters disturbing nesting waterfowl is not new. But it has grown as recreational use in the Mat-Su has boomed.

Grebes, loons and swans are perhaps most at risk to boating traffic because they are sensitive to disturbance and build their nests out on the water or near the shore.

In Southcentral Alaska, nest building for those three species typically begins in May. Eggs are laid in May and June, but if the eggs are lost, a bird may lay another clutch even into July. Chicks hatch in June and July but some are still young enough to be vulnerable even through Labor Day weekend.

This red-throated loon nest shows how loons typically build their nests in the grass along the shoreline. Photo by Tim Bowman, U.S. Fish and Wildlife Service

Because nests can be hard to see, biologists recommend that boaters travel slowly near shore and be mindful of wakes. Boaters should not race up to birds or get too close. Even boaters in canoes and kayaks who approach too closely can frighten birds away from their nests.

In addition, people should pick up loose fishing line because birds can get tangled in it. Fisherman should also refrain from using lead sinkers because lead is toxic and contaminates waterways.

It is illegal to harrass wildlife. Tessler said that although there is no set rule about how far away people should stay from nesting birds and other wildlife, the animals offer a good indication.

“If you’re close enough to elicit a change in an animal’s behavior then you’re too close,” he said.

He also reminds people that it is a federal offense to kill nesting waterfowl. Citizens who witness people killing birds or swamping nests should call the Alaska State Troopers at 1-800-478-3377.

The Department of Fish and Game is giving away free signs that alert boaters to the presence of nesting birds. The signs read, “Do Not Disturb. Bird Nesting Area.” If you would like a sign to post on your property, contact Tessler at 267-2332. He is also the contact for the Loon and Grebe Watch program, a volunteer-based effort coordinated by state and federal agencies that monitors local loon and grebe populations.

Elizabeth Manning, a former Daily News reporter, is a writer and wildlife educator with the Alaska Department of Fish and Game. She can be reached at 267-2168 or at elizabeth.manning@alaska.gov.