A mountain goat equipped with a GPS collar. These devices allow researchers to map the daily movements of goats, and learn how they use their habitat throughout the year. Photo by Kevin White.

About 60 mountain goats with similar collars have descended from wind-swept alpine ridges overlooking Lynn Canal to the shelter of lower-elevation forests. Gustavus Moose, Admiralty Island toads and Petersburg owls have been equipped with telemetry devices.

Why do biologists put these things on animals, and what do they do?

In the mid-1960s, VHF (Very High Frequency) radio telemetry devices began a revolution in wildlife research and management by vastly improving biologists’ ability to locate animals. Repeatedly locating an animal creates a picture of its movements over time, and new GPS (Global Positioning System) units have made this much easier.

Learning where animals have their young, how young animals disperse as they mature, and where animals hibernate or overwinter is valuable to managing wildlife. “The collars help us understand how they use their habitat,” said Kevin White, a wildlife biologist with the Alaska Department of Fish and Game.

An animal may use a small part of its overall habitat for just a short period each year, but that may be a critically important time. An animal may be particularly vulnerable to predation at certain times. Logging, mining, road construction, hunting, helicopter flight seeing, or recreational activities may have an adverse affect on wildlife – or not – depending on when it occurs.

These days, biologists have a variety of devices at their disposal. Lightweight backpack harnesses attach transmitters to birds. Fish swallow tiny waterproof units that work inside their bodies. Slim belts strap transmitters to toads.

The first step is to safely equip an animal with the device. Generally animals are captured and released, but there are exceptions. Researchers in small boats speed up to whales and tag them with transmitters as they surface.

An animal wearing a VHF radio transmitter can be tracked by a person on the ground or in the air using a receiver and directional antenna. Early units were heavy and suited for large animals such as bears, moose and elk – the rule of thumb is that a device can’t exceed three percent of the animal’s weight. It can’t interfere with the animal’s normal lifestyle.

Researchers generally listen to a series of “beeps” from the transmitter, and changes in the tone and volume (signal strength) indicate proximity and direction. It takes practice to interpret the signal.

VHF can also provide information on activity. The pulse rate of the signal can be set to change if the animal doesn’t move for a certain length of time, indicating the animal may be dead, or the collar has come off. 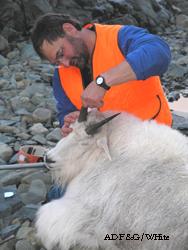 The device can be programmed to turn on and off or signal less frequently. Shutting down at night when an animal is sleeping, or in winter when a bear is hibernating, can stretch the batteries for years. The devices can be configured in a variety of ways to meet the needs of the particular study.

It stands to reason that a tiny device has limited range. That may be fine for tracking toads around a few square acres of Admiralty Island over the course of the summer, if the researcher is nearby in a field camp. It wouldn’t make sense to put a transmitter on a little brown bat in Fairbanks before the fall migration. When the bat leaves, the signal won’t carry far enough to be useful.

A powerful transmitter on a caribou, however, can help biologists follow the entire herd as it migrates.

There are some amazing modifications to the basic technology that have other applications. Vaginal transmitters in caribou or moose that pop out and begin transmitting when the calf is born are helping researchers better understand birth timing, location and predation on newborn animals.

“An animal’s behavior changes depending on weather, and we see that,” said White. “So if we’re flying only on nice days, then we’re getting a picture of an animal that may not be as representational. Our interpretation is limited to what they are doing on daylight hours during good weather, and the overall goal is often to learn what animal is doing all the time.”

GPS offers the ability to log an animal’s location virtually all the time – every 15 minutes, every hour, once or twice a day – whatever suits the needs of the project. GPS units are heavier than VHF transmitters, suitable for animals larger than about 30 pounds.

Generally speaking, GPS is the opposite of VHF. It’s a receiver, not a transmitter. The GPS unit connects with an array of satellites and calculates the animal’s location, then stores that information. In most cases, the collar must be retrieved for the researcher to get the data. The trusty VHF device is part of this system, and signals the location of the collar. 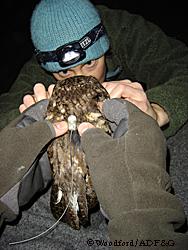 A useful accessory to this is a programmable fastener release mechanism. The collar will drop off at a specific, predetermined time so the researcher does not need to recapture the animal to retrieve the data. Once the data are downloaded, the collar can be refurbished and reused.

The main disadvantage of a stores-data-onboard GPS unit is data loss. There are no intermediate data reports. If the release mechanism fails, the collar and data are lost unless the animal can be recaptured.

White has GPS collars on moose and mountain goats. The mountain goat collars periodically transmit the data. White must be near the animal to receive the broadcast. He uses the collar’s VHF transmitter to locate the animal from the air, and flies into range to receive the transmission. If he’s not there, he misses his chance.

“The moose collars I have now will last almost four years, getting a location every three hours, every day of the year,” White said. “I must retrieve the collar to get it, but I’m pretty confident we can. With the goats, in remote, almost inaccessible areas, it could be a lot harder to get the collar back. That’s the reason for the more expensive, remote-download system.”

The additional hardware to transmit information adds considerable expense and weight to the collar. These are useful for mountain goats and possibly deer, but not smaller animals.

With another system, the manufacturer receives the data and sends it to the researcher via e-mail (an additional cost). The researcher gets the data more or less immediately and without having to go into the field.

One new system uses a cell phone modem in the collar to send and receive text messages. Every day, the researcher can receive eight GPS points indicating the animal’s location. In addition, temperature, altitude, activity and a “mortality message” can be sent as well. It is also possible to send a message to the collar to change the GPS positioning or the VHF beaconing schedule.

VHF devices are cheaper than GPS systems, and are well-suited to many researchers or wildlife managers’ needs. They can be much smaller and can get years of life from batteries.

Riley Woodford is a writer with the Alaska Department of Fish and Game, Division of Wildlife Conservation.