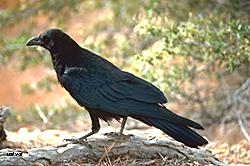 Ravens are found throughout Alaska, but in Anchorage, the numbers increase in the winter months. Photo by Gary Stoltz/USFWS

You know winter has Anchorage in her icy grip when you walk through a snowy parking lot and hear a shiny black raven croaking from a lamppost perch.

Even my 4-year-old understands the connection: The ravens are back; winter is here, he told me the other day.

Although several hundred ravens live in town during the summer, large groups of the birds return to Anchorage each winter for easy meals. These corvid family members typically arrive in late October, according to Alaska Department of Fish and Game biologist Rick Sinnott.

Sinnott studied ravens in the mid 1990s and lists them as one of his favorite animals. Based on Audubon Alaska’s Christmas bird counts and his own observations, Sinnott estimates the city's population to be “a couple thousand” ravens during winter.

Alaska is one of the few places in the world with sizeable urban raven populations. That’s because, for about three centuries, ravens were considered “vermin” and even satanic birds – persecuted by European nations and colonists. However, most Native peoples appreciated and even revered ravens, and Anchorage has always been surrounded by wild country.

Ravens are omnivorous, and will eat just about anything humans eat – plus some foods that would either kill us or make us sick. During summer, when most ravens live away from populated areas, their natural foods include carrion, vegetation, bird eggs and nestlings and small rodents. During winter, when wild food is scarce, town ravens subsist largely on road kills, human garbage and berries from ornamental trees.

Sinnott and Rod King, a UAF researcher, have both observed that ravens have a penchant for Chinese food – noodles in particular.

Ravens often gather near restaurant Dumpsters, according to both researchers.

Despite their scrappy, street-wise image, ravens are considered to be one of the most intelligent birds – extremely social with a wide range of vocalizations and behavior.

During one behavior called the “fuzzy-headed or thick-headed” display, ravens fluff out their head feathers to signal their submission to a dominant bird. Dominant birds, on the other hand, erect the head feathers above their ears for a “Batman” effect.

During courtship, ravens fluff out their lower flank feathers, making them appear bigger. Sinnott calls this “the saggy-pants display” because it almost looks as though the birds have lowered their feathers or “pants.” 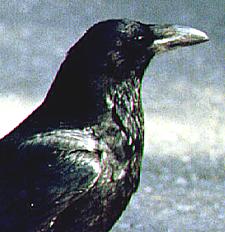 Ravens have an extensive vocabulary that includes body language as well as calls and sounds.

Most urban-dwelling ravens “commute” into town during the day, returning to far-off roosts at night. Both King and Sinnott observed this in their studies when they tracked birds to nighttime roosts miles from Fairbanks and Anchorage, their study areas.

From December through March, ravens put on aerial displays thought to be involved with courtship. Ravens swoop, dive, do barrel rolls and even play with sticks or pieces of ice in the air. They chase each other to try to steal the object, and will even drop it and pick it up again in mid-air like Harry Potter at a quiddich game.

Sinnott said he has observed a raven grab a branch with its beak in mid-flight and just hang there. Once, he watched a raven hang upside down from a branch like a bat.

“They're showing off,” Sinnott said. “The hypothesis is if you’re a scavenger and part-time predator looking for a mate, you need to show how maneuverable, adept and fearless you are. All that figures into how good you are going to be at being a provider.”

Indeed, only a daring bird would swoop in on carrion and steal meat from a bear or pack of wolves. Males feed females for three weeks during spring while the females are incubating eggs – continuing to hunt for the family until the young birds fledge in early July.

A good place to see ravens playing is at the edge of tall buildings or at the top of a steep bluff where the wind provides an updraft for soaring.

Last week, my 4-year-old son and I stepped from our car to watch four ravens circle and chase each other against the south bluff of Westchester Lagoon. Two carried white sticks or pieces of ice. Two others gave chase.

We watched smiling until the birds flew out of sight, then walked together in silence toward a warm building. Our breath hung before us like fog and snow crunched beneath our boots.

No doubt, winter had come.

Elizabeth Manning is an outdoor writer and an educator with the division of Wildlife Conservation. Formerly a journalist with the Anchorage Daily News, she has extensive experience writing about the wilds of Alaska and outdoor recreation. For more interesting facts about ravens, see Bernd Heinrich’s “Ravens in Winter” or “Mind of the Raven.”