Invasive Species Can Be Beaten Back

By Jon Lyman and Riley Woodford 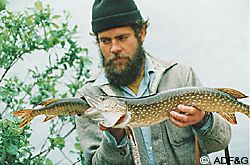 This wildlife biologist found these two pike on the shoreline of a Bristol Bay lake. The larger pike suffocated while trying to ingest the smaller pike.

An invasion is underway worldwide, and Alaska is on the alert.

Invasive species can be introduced accidentally - awash in the ballast water of ships, or hitchhiking on travelers or packing materials. Sometimes deliberate introductions backfire with unwanted, unforeseen consequences. In other cases, exotic species are introduced illegally or escape from captivity.

Alaska has not yet suffered as much economic and environmental impact from invasive species as has occurred elsewhere, but wildlife managers are concerned about several animals: northern pike, New Zealand mud snails, Atlantic salmon and European green crabs. Alaskans can help, especially with the spread of the tiny New Zealand snail.

The New Zealand mud snail is an invasive species now affecting sport fishing from the Columbia River system to the Great Lakes. These freshwater hitchhikers probably first arrived in the United States along with young fish shipped to an Idaho hatchery from New Zealand in the late 1970s.

The New Zealand mud snail can reproduce asexually, pass through fish unharmed, and survive many common treatments used to stop other pests. Once established, these tiny snails disrupt the food web by consuming the algae that important native insects rely upon for food. In a short time, up to 60 percent of caddisfly, stonefly or mayfly larva, which salmon fry and trout eat, can be starved out. Consequently, fish suffer.

"It looks like one of the main ways this is spreading is on the gear, particularly the wading boots of sport anglers," said Denny Lassuy, the invasive species coordinator for the U.S. Fish and Wildlife Service in Anchorage. Last year, Lassuy prepared a flyer detailing how anglers can help keep this invasive out of Alaska, and distributed it to about 1,500 registered Alaska sportfishing guides.

This season, when friends or clients visit Alaska for freshwater fishing, check over their waders, boots, tackle and gear for tiny snails. Even better, guests should thoroughly clean and dry their gear before coming up. Alaskans can consider loaning gear to visitors. Alaskans who fish outside the state should remember to clean and dry their fishing gear before returning to Alaska.

Another potential invader of concern is the European green crab. This crab, about 3 inches across its carapace, is a voracious predator of young Dungeness and other shore-dwelling crabs. Its inadvertent introduction around the world has destroyed shellfish industries from the Northeastern United States to Tasmania, to South Africa.

This wallet-sized plastic information card is being distributed to increase public awareness for this invasive species.

Introduced to California about 1990, this small crab has multiplied rapidly and killed all other shore dwelling crab species in some areas as it expanded its range to the north. Managers expected its impact to be felt in Southeast Alaska. However, the State of Washington began a very aggressive program to stop the green crab's march northward. Volunteers were instrumental in carrying out this monitoring and control program, and this may have substantially slowed its spread. Whether borne on a warm El Niño ocean current or in the ballast water of ships traveling northward from the Lower 48, Alaska managers remain concerned with potential arrival of this troublesome invader.

BP, the largest oil transporter working out of Port of Valdez, is experimenting with an ozone treatment process to kill organisms in ballast water. BP has outfitted one tanker with treatment equipment. On average, about 713 ships per year arrive at the Port of Valdez, dumping millions of gallons of ballast water into Prince William Sound.

In Southeast Alaska, Atlantic salmon pose a potential threat to coastal salmon, steelhead and trout fisheries. Atlantic salmon have escaped in large numbers from fish farming operations in British Columbia and Washington in past years. Recently, managers have found "young of the year" Atlantic salmon, which likely hatched in the wild, in rivers along the Northwest coast.

Invasives don't always arrive in Alaska from halfway around the world. Perhaps the best-known invasive species in South-central Alaska today is the northern pike. Pike are a desired game and subsistence fish throughout much of Alaska, but in South-central and the Kenai Penionsula, where they are not native, northern pike consume young wild salmon and wreak havoc with other native fish populations.

New Zealand mud snails, European green crabs, Atlantic salmon, and northern pike are just a few of the species threatening our waters. But invasives are threats which can be met and won.