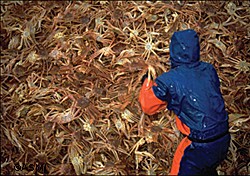 Processors in the newly rationalized Aleutian Island and Bering Sea crab fisheries are required to use eLandings. Photo courtesy of ASMI.

Every year, the Alaska Department of Fish and Game (ADF&G), Division of Commercial Fisheries, prints hundreds of thousands of paper fish tickets to distribute to fish processors. For years, there was talk of the day when we would compile fish ticket data electronically … and then we’d go ahead and order more paper fish tickets.

According to Eric Reiter, Seafood Industry Coordinator at ADF&G, between 200,000 and 430,000 4-ply printed fish tickets are ordered every year. The current inventory occupies a 250 square foot storage room.

The summer of 2005, after five years of collaboration, the first fish tickets went electronic! The first to go electronic (known as eLandings) were crab. Within six months the groundfish and halibut tickets were also electronic. Processors still have the option of using paper fish tickets, but most have eagerly switched to eLandings.

“This turned out to be a lot more complicated than we thought,” said Lynne Mattes, who supervises fish ticket data entry in Kodaik. “Folks put an incredible amount of time and effort into this system.”

The new electronic fish ticket has been assigned the title the E ticket.

“The majority of processors just love it, and it takes us out of data entry, printing, storing and distributing paper fish tickets, which is a major expense,” said Smith.

“A lot less data entry is good for everybody,” Mattes said. Because the data is only entered once, by one person, there are fewer data entry errors. “There are also checks in the system to eliminate errors -- for instance, processors can’t enter the wrong statistical area number,” Mattes added. 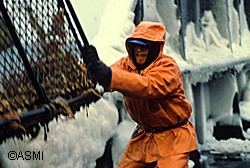 The summer of 2005, after five years of collaboration, the first fish tickets went electronic. The first to go electronic (known as eLandings) were crab.

One eLanding report can record and submit an entire harvest offloaded, recording all permits associated with the landing report at the same time. With paper fish tickets, a ticket had to be filled out for each permit holder. The eLandings reporting system generates pdf files of the appropriate fish ticket ready for printing, signatures and distribution to the permit holder and ADF&G.

“It gives us complete documentation of all fisheries in Alaska that we’ve never had before,” Smith said. Although the processors are now in the business of data entry, they prefer it that way. Instead of waiting for their information to be entered from the paper ticket, the information becomes immediately available online.

The eLandings program also includes a function that allows processors to export the information in the eLandings report into their own bookkeeping operations. Currently, two major shoreside processors in Alaska are using this feature, North Pacific Seafoods, which has three processing plants in Alaska, and Unisea, in Dutch Harbor.

For smaller, rural areas with poor internet connections, eLandings has a desktop application. Forms are filled out on the computer and can be submitted in batches by email when the connection is working.

The eLandings web-based application was launched simultaneously with the rationalization of the Aleutian Island and Bering Sea crab fisheries. Processors in these fisheries are required to use eLandings to record landing information and to debit crab Individual Fishing Quotas (IFQ) and community development quotas (CDQ). Use of paper fish tickets to document these landings is not allowed.

What about the remaining fish tickets? “In 2007 the shellfish ticket ???will be integrated into eLandings; salmon and herring sometime in the next few years,” Smith said.

eLandings was developed by the Interagency Electronic Reporting System, which includes ADF&G, the International Pacific Halibut Commission, and the National Marine Fisheries Service. These three agencies are responsible for managing the commercial fisheries in Alaska. The project is funded by the Pacific States Marine Fisheries Commission.

For more information on the eLandings system go to http://elandings.alaska.gov/