Wildlife biologist Doug Larsen with a tranquilized, radiocollared and red-stained mountain goat, part of a current research project in Southeast Alaska. Larsen is the regional supervisor for Region 1, Southeast Alaska, and is concerned about bears in the region.

Bears are arguably among the most intriguing and captivating of Alaska’s wildlife. Each year thousands of people, locals and visitors alike, seek out bears to view, photograph or harvest. Many visitors to Alaska consider seeing a bear to be among the highlights of their trip. Countless photos exist of bears moving and feeding in their natural habitats; in sedge meadows along beaches in the spring and along salmon-filled streams in the fall. These images constitute positive reflections of the species. Unfortunately, other, not so positive reflections accompany and often overshadow the good ones.

Pictures of bears eating garbage at landfills, or out of neighborhood garbage cans, are all too common, and often represent human failings in dealing with trash or other attractants. These failings result in public complaints about bears to Fish and Game offices across much of the state each year, often necessitating unpopular actions by local management biologists. In the absence of suitable alternatives, biologists are often left with killing food-conditioned bears as their only option. Needless to say, this is an undesired outcome, both for the public and for Fish and Game staff.

Thankfully, there can be a better outcome for both the bears and the public if a commitment is made to address the root of the problem: refuse management. Over the past several years cooperative efforts between local Fish and Game staff, the City and Borough of Juneau (CBJ), other agencies and organizations, as well as interested members of the public, have resulted in successful minimization of bear problems in the greater Juneau area. Ordinances passed by the CBJ have resulted in garbage storage practices that minimize access to garbage by bears, and result in citations being issued to citizens who fail to store garbage responsibly. Along with a staff person dedicated to enforcing the ordinances, CBJ has invested in bear proof garbage containers, and has conveniently and strategically located them along many city streets. Commercial vendors have been supplied with bear proof dumpsters, with assistance from Juneau’s refuse company.

In addition to passing ordinances and enforcing the associated laws, there has been a strong emphasis placed on education and outreach in Juneau. CBJ, the Alaska Department of Fish and Game, the US Forest Service, and a local non-profit organization, Discovery Southeast, have cooperatively developed a school-based program: Alaska Bears in Communities (ABC) for local elementary and middle school students. These partners also put together radio spots, write articles for Juneau’s local newspaper, and provide written materials to the general public about the importance of keeping garbage away from bears. These collective actions and activities have been successful in limiting bears’ access to trash, and have resulted in minimizing the undesired conditioning that accompanies access to human foods. Progress is good, but more can still be done. 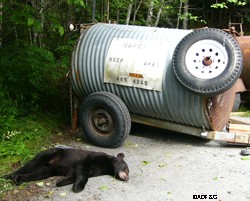 Bears and people can co-exist, but bears lose when people do not behave responsibly.

In contrast, several other communities in the state have experienced unabated problems with bears routinely visiting residential areas, obtaining food and often damaging home owners’ properties. Not surprisingly, these encounters have often resulted in dead bears.

The evidence is clear. By taking this issue seriously, communities can limit access to human foods by bears and lessen bear/human conflicts in urban areas. However, accomplishing this requires a serious commitment on the part of local governments, state and federal agencies, school districts, and especially individual citizens. In neighborhoods where only some citizens are diligent in restricting access to garbage or other foods, bears will simply take their searches to neighboring homes or neighborhoods. However, in neighborhoods where all citizens are equally diligent in keeping foods away from bears, bears will often return to forest habitats and seek natural foods.

For its part, the Department of Fish and Game welcomes and embraces activities and partnerships that result in bears being bears in their natural habitats. Photos of bears feeding on sedges, fish, berries, and other natural foods will always be preferred to those of bears feeding on household garbage, and safer for both bears and humans as well. It’s in our collective hands to dictate the final outcome for Alaska’s bears.

Doug Larsen is the supervisor for Alaska Department of Fish and Game’s Region 1, (Southeast Alaska) and is based in Douglas.