Nesting inventory of selected raptors in Interior Alaska is one of the current Nongame Program projects.

Alaska's Nongame Program will be torn between bats and birds this winter.

Alaska Fish and Game biologists are launching a new program they hope will unearth a wealth of knowledge about Alaska's nongame wildlife. Program components include research, monitoring, partnering, and the development of databases and other tools for biologists. The Alaska nongame biologists face some tough choices about what will be studied. 137 ideas have been proposed and just a fraction of those will be funded.

Among the suggestions proposed for study: the secretive nesting habits of marbled murrelets, the decline of boreal toads and the range of Alaska's elusive bats. One biologist hopes to learn how to minimize collisions between birds and FAA towers. Another hopes to look at the possible effects of fast ferries on marine mammals.

Matt Kirchhoff, regional nongame biologist for Southeast Alaska, asked for input at a mid-January meeting of the Juneau Chapter of the Audubon Society, where he presented an overview of the new program.

"Should we fund a few big, ambitious projects or a lot of smaller projects," he asked. "Do we focus on declining species, indicator species, keystone species like top predators, or charismatic species that people can really relate to?"

He's leaning toward a mix of projects, and he and his colleagues will decide this winter which to fund. That should give researchers the coming 2004 field season to begin their work.

Nongame biologists Kirchhoff, Dave Tessler and Jack Whitman will conduct some of the projects, as will other Fish and Game staff.

"I'll be working quite a bit with owls, and assisting with golden eagle work in the Alaska Range," said biologist Jack Whitman. Whitman will also be helping with the Alaska side of a study that's currently underway looking at Pacific golden plovers.

Many of the projects will be done by researchers outside of Fish and Game. "We want to build strong partnerships outside the department - with schools, universities, federal agencies, Native groups, individuals and non-governmental organizations," Kirchhoff said.

The department's funding comes from the federal government's State Wildlife Grant program. Although the exact amount isn't finalized, it's likely about three-quarters of a million dollars will be dedicated to nongame projects.

Part of the impetus for the nongame program is to keep rare species from becoming endangered and to keep common species common, said Program Coordinator Mary Rabe.

"It's much easier to address the issue of a declining population before the numbers are critically low." Rabe said. "If it gets really low, it gets listed, and most people have found that working around an endangered species is very difficult."

Biologist Dave Tessler said there's a tendency to think of nongame wildlife as peripheral - the animals that exist around the edges of the game animals that have a higher public profile. But that doesn't mean they aren't important. 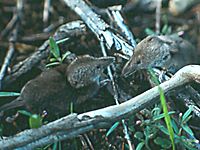 Small mammal populations are critically important to a variety of predators to the extent that certain populations, particularly marten, weasel, fox, coyote, and many birds of prey, exhibit fluctuations that mirror cycles of small mammal abundance.

"The lion's share of biodiversity is what we call nongame," he said.

Building a basic inventory of Alaska's nongame is one of the first steps the program will make. Alaska's list of nongame animals includes 468 birds, 107 mammals, dozens of fish, seven amphibians and four reptiles - creatures that range from the common to the mysterious. Nongame also includes aquatic and terrestrial invertebrates such as slugs, snails and the Alaska state insect, the four spot skimmer dragonfly.

"We often lack basic information on where an animal occurs, the boundaries are fuzzy and we don't know the range or distribution of the species," Rabe said. "How can you assess your populations and say if they're sustainable if you can't even say where they are?"

Rabe worked in wildlife management for the state of Michigan for about 20 years before coming to Alaska last year to help launch the nongame program.

"Part of the draw is the challenge of creating a new program, I think of it as being new, it's being built as a program," Rabe said. "There's always been work on nongame and endangered species, but it's now being expanded with dedicated funding."

One of her first tasks was to hire three nongame biologists. Kirchhoff, a deer specialist with 22 years experience, came on board last October and covers the Southeast region from the Douglas office. Jack Whitman, who has spent 30 years working mostly with avian and mammalian predators, covers the Arctic and Interior out of the Fairbanks office. Dave Tessler, based in Anchorage, covers South-central. Tessler has worked with a broad range of wildlife over the past 20 years - walrus, seabirds, eagles, songbirds and salmon. All four will help decide the direction of the research projects.

They're also working with their counterparts in the Division of Sport Fish to develop a nongame wildlife conservation strategy. This is a requirement for the federal funding and helps managers know how to best direct resources. One focus will be animals with conservation concerns.

The Bristle-thighed curlew is one example, or the marbled murrelet. Kirchhoff said 85 percent of the world population of marbled murrelets occur in Alaska, and the greatest density is in Stephens Passage just south of Juneau.

Most of the world population of black oystercatchers is found in Alaska, and little is known about these intertidal wading birds. "We know virtually nothing about their population status, their nesting behavior and whether they are declining or increasing," Kirchhoff said.

A year from now, that may well be different.