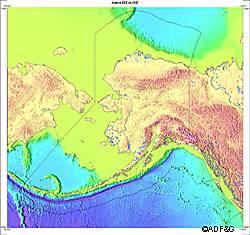 The Magnuson Act* of 1976 created the North Pacific Fishery Management Council, one of eight regional fishery management councils set up to provide conservation and management of all fisheries within federal waters. Federal waters are defined as those between 3 and 200 nautical miles offshore, called an Exclusive Economic Zone (EEZ). The Council has exclusive jurisdiction over Alaska’s 900,000 square mile EEZ. The Council manages fisheries in the Bering Sea and the Gulf of Alaska.

The Magnuson Act was set up principally to address heavy foreign fishing, promote the development of a domestic fleet, and allow American vessels and companies to take over harvesting and processing from the fleets of other nations.

The groundfish fisheries are the Council’s primary responsibility and include cod, flatfish, mackerel, pollock, sablefish, and rockfish species harvested mainly by trawlers, longliners and pot fishermen in the Gulf of Alaska and the Bering Sea and Aleutian Islands fisheries. Other large Alaska fisheries such as salmon, crab and herring are managed primarily by the State of Alaska.

Membership of the council is made up of the following:

• The Council itself. There are 11 voting members, six from Alaska, three from Washington, one from Oregon, and a federal representative, the Alaska Regional Director of NMFS. The nonfederal voting members represent state fisheries agencies, commercial and recreational fisheries, fishing communities, and the general public. The four nonvoting members represent the U.S. Coast Guard, U.S. Fish and Wildlife Service, the Pacific States Marine Fisheries Commission, and the U.S. Department of State.
• The Advisory Panel. People who have interest in the fisheries are appointed by the Council every year from all region and fisheries. Members represent all aspects of Alaska's fisheries, including the seafood processing industry, Community Development Quotient groups, environmental interests, commercial fishermen, and recreational fishermen and others.
• The Scientific and Statistical Committee. The council makes annual appointments made up of biologists, economists, and sociologists who provide recommendations to the Council.
• Staff who work out of Anchorage
• Plan teams
• Various committees. These people collect and evaluate relevant information regarding proposed fishery management plans or plan amendments for a fishery. Many Fish and Game employees are part of these committees.

The council has prepared five fishery management plans for fisheries off Alaska. Each plan encompasses regional fisheries for certain species.

1. The Bering Sea/Aleutian Islands Groundfish plan includes all species of groundfish harvested commercially using trawl, longline, pot, and jig gear. The National Marine Fishery Service (NMFS) in Juneau governs inseason management of these fisheries.
2. The Groundfish of the Gulf of Alaska plan. This is similar to the Bering Sea and Aleutian Island groundfish plan. Some commercial species (black rockfish, blue rockfish, lingcod) are not included because they are managed by the State of Alaska.
3. The Bering Sea and Aleutian Island King and Tanner Crab plan includes all species and fisheries for king and Tanner crab (red, blue, and brown king crab, Tanner crab, and snow crab). Inseason management of these fisheries is provided by ADF&G in Kodiak.
4. The Alaska Scallop draft plan was developed to control fishing effort in the weathervane scallop fishery. Only nine vessels are permitted under a license limitation program. Inseason management of the fishery is provided by ADF&G in Kodiak.
5. The Salmon Fishery in the EEZ off the Coast of Alaska plan was developed to prohibit fishing for salmon in the EEZ except by a limited number of vessels using troll gear. All management of the salmon fisheries is deferred to the State of Alaska. 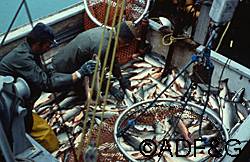 The council meets five or six times each year, four times in communities around Alaska, and once in Washington or Oregon. The council's staff of 15 resides in Anchorage, Alaska.

Because many of the fish populations in the Gulf of Alaska and Bering Sea and Aleutian Islands spend some of the year in both federal and state waters, you may wonder if the Council’s duties overlap with those of the Alaska Board of Fisheries. They do, but the board and the council have signed a joint protocol agreement to help coordinate compatible and sustainable management of fisheries within each organization’s jurisdiction.

A committee was formed, the Joint Protocol Committee, which includes three members from each group that meets at least once a year to identify and discuss issues of mutual interest.

The entire board and council meet jointly once a year to consider proposals, committee recommendations, the analyses, and other topics of mutual concern. The joint meeting is typically held in Anchorage in February, depending upon council and board meeting schedules.

Amy Carroll is a publication specialist and writer with the Alaska Department of Fish and Game, Division of Commercial Fisheries.