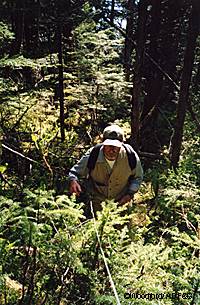 On a sunny spring day in Southeast Alaska, a skiff noses up to a rocky beach on Douglas Island near Juneau and two biologists quickly jump out. The island is popular with deer hunters, and the biologists are hoping to learn how the island’s deer population fared during the winter.

Each spring for more than 20 years, state wildlife biologists and technicians have come to this same area to walk a transect line about a mile long, stretching from the beach to the subalpine. The biologists are looking for deer pellets or droppings – tell-tale evidence of deer.

One biologist clips on a slim 20-meter long cable, takes a compass bearing and heads into the woods. The cable represents a straight line, and when the second biologist sees the end of the cable he yells, “Stop.” As he walks the length of the line to catch up to his partner, he counts every group of deer pellets in a swath one meter wide. The first “pull” contains six pellet groups, the second four, the third eight. The biologists systematically climb 1,500-feet upslope. Patches of snow appear, and the transect ends at the 75th pull, just at the point where the melting winter snow blankets the forest floor.

Two miles south, another team has run a similar transect. Next week, the teams will work about 15 miles north on Shelter Island. Pellet surveys are done on several of the larger islands from Prince of Wales in southern Southeast north and west to Prince William Sound and Kodiak Island, in the northern portion of the range of Sitka black-tailed deer.

This year, the pellet count seems high, and deer sign is abundant. The emerging yellow flower buds of skunk cabbage are all nipped off at ground level, and the forest floor is covered with deer tracks.

The pellet surveys don’t provide precise numbers about the deer population, but they offer insight into the relative numbers of deer in the areas.

“Transects are really trend indicators, so they give a sense for whether populations are up, down or stable,” said state wildlife biologist Doug Larsen.

Larsen said the pellet transects in Southeast are based on a research project done in the 1980s. A dozen deer were captured, radio collared and released on Portland Island, a small island in Stephens Passage near Juneau. 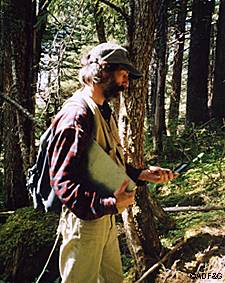 The author checks a compass bearing on a pellet survey. Photo by Doug Larsen.

“There was a known number of deer on the island, and they were able to correlate the counts on the pellet transects with the deer. It came out to roughly one pellet group per plot on average – about 32 deer per square mile,” Larsen said. “So you can extrapolate that to get an approximate idea of how many deer are in a watershed. It gives you a sense for numbers.”

Dale Rabe, a state biologist who helps coordinate wildlife management in Southeast Alaska, said the principle is premised on the fact that deer defecate with great regularity, about 12 times per day per deer. Considering that as a constant, and how long the pellets persist in environment, it’s possible to take information on number of pellet groups and relate that back to the size of the deer herd in that particular area.

Rabe is quick to point out that this is not hard-and-fast science.

“There are confounding effects – deer that migrate, deer that are killed, and young that are born – so the population isn’t staying the same, yet the pellets can persist through the time period when the population could be changing,” Rabe said. “So that adds some complexity.”

In some drier areas in the Western United States, pellet groups may last three or more years, Rabe said. “Here it’s so wet they have a short persistence. On Prince of Wales Island, during a rainy period, they may be gone in a month,” he said. The key is making comparisons in the same area.

“You are comparing apples to apples, doing the same transects in same location, year after year, and comparing results from one year to the next to get a relative idea of changes in population,” Rabe said. “So if pellets are up 20 percent, we expect the population is up similarly.”

Biologists consider anecdotal evidence as well as the pellet surveys when estimating deer population trends. Reports from hunters, harvest data, and general sightings along highways all contribute to the picture.

Neil Barten, the Fish and Game area biologist for northern Southeast Alaska, said the pellet surveys indicate deer numbers on Douglas Island are up from two or three years ago. Generally speaking, he said, over the past three or four years, the pellet counts in both these areas have steadily increased indicating an upward trend in deer numbers. 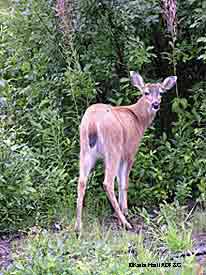 Sitka black-tailed deer defecate about 12 times a day, and the droppings or pellets provide insight to the numbers of deer in an area. Photo by Karla Hart/ADF&G

“That is what we would expect, given the mild winters in recent years,” he said.

Biologists are taking the pellet survey concept a step further with a new study on Prince of Wales Island that takes advantage of new DNA extraction technology. When a pellet passes through a deer, it picks up a few cells from the gut. Those cells can be removed from the surface of the pellet and a little DNA can be extracted.

“We are collecting those pellets, sending them to a lab and having them extract and amplify that DNA,” Rabe said. “That’s a signature. You can tell a specific animal. So we can go back and sample again, and ask, how many of the animals we saw before can we see again. That allows us to use a technique called mark-recapture, and can help actually estimate the number of animals in a population.”

Mark-recapture is a basic technique for estimating wildlife populations, but this is a new, sophisticated way of getting the identification of individual animals, Rabe said. The technique was used recently in Interior Alaska to study coyote populations and their diet. In coming years, it should contribute to our understanding of Sitka black-tailed deer, and help wildlife managers monitor populations.

"We expect that new technologies like DNA will provide even better information on wildlife in the future," Rabe said.

For more on scat DNA and coyotes, see: http://www.wildlifenews.alaska.gov/index.cfm?adfg=wildlife_news.view_article&issue_id=27&articles_id=151
Riley Woodford is a writer and editor for the Alaska Department of Fish and Game. He has a biology degree and has assisted with a number of research and management projects, including deer pellet surveys.