The Bears of Winter 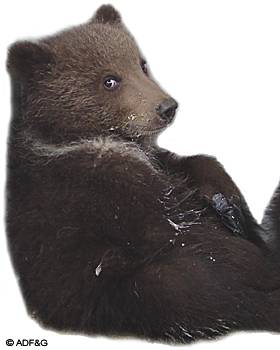 Bear cubs are born in the den midwinter as the mother hibernates. The bear cub hairless, blind and weighs less than one pound at birth, but grows quickly in the den as it nurses over the winter.

Across Alaska, there are secrets sleeping beneath the snow.

Hibernating bears are biological wonders. Inactive all winter, they don't suffer bone loss, muscle atrophy or bedsores the way a person would. They don't eat, but their nutritional needs are met. They need water but don't drink. Their cubs, born during hibernation, are so fetal-like that one researcher called their development "an almost external pregnancy."

"I think there's going to be medical breakthroughs that should be credited to bears, breakthroughs that can save lives and make some lives better," said biologist John Hechtel. "People are afraid of bears, but there is so much we can learn from them."

"A lot of times you couldn't even tell a den was there," he said. "It makes you wonder what you've walked by. Scattered through the landscape under the snow these bears are tucked away -and you'd never know."

Sometimes bears will drag spruce boughs or grass into the den to make a bed, Hechtel said, and sometimes they just lay on the dirt. He once found a nest-like den where bears had mounded up a huge pile of grass, shaped like a big beaver lodge, and burrowed inside.

"There were four bears in there - a mother bear with three, two-year-old cubs," he said.

Often a den isn't much bigger than the bear, and that raises some interesting questions about how bears handle months of inactivity.

"They're bedridden, more or less - if you or I were lying in bed for months - think about what that would do to muscle tone and bone mass," Hechtel said.

One possible answer may be shivering. State game biologist Tom Lohuis said there are indications that bears may undergo periods of shivering in the den, which could help bears maintain muscle tone ands avoid bedsores.

Osteoporosis researchers and NASA scientists want to learn why bears don't suffer bone degeneration during hibernation. In humans, rapid bone loss is the consequence of inactivity - whether recovering from an injury or spending time in space. Researchers have found that although bone degeneration is occurring while bears hibernate, bears don't experience significant bone loss because they recycle the calcium and phosphorus right back into rebuilding bone.

People and most mammals don't recycle calcium very well. Understanding the metabolic pathways bears use could be worth a fortune, Hechtel said.

"There's all sorts of weird stuff going on with hibernating bears," Hechtel said, "Most hibernating animals aren't pregnant. But an adult female goes into the den pregnant, her metabolism shifted into a dormant state, yet within her she has fetus or embryo in a rapid-growth state. She's pregnant, gives birth and lactates all in the den." 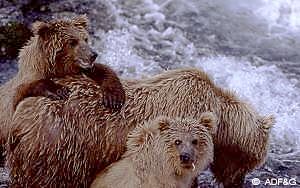 The cub is born mid-winter, blind, hairless, helpless, and weighing less than a pound. Hechtel noted that an eight-pound human baby is about seven percent the weight of a 120-pound mother. The tiny bear cub is just a fraction of one percent the mother bear's weight.

"It's almost an external pregnancy - the cub is born and then migrates to the teats and nurses," Hechtel said. "The size of the cub in the spring when it comes out of den is closer to what you'd expect to see at birth."

The reason is bear milk, which is very high in fat. The hibernating mother bear is living off her stored fat, and it's much more efficient for her to put that fat into her milk than to convert it to sugars and proteins that must be transported through her blood to the placenta, then through the placental barrier to the fetus. The mother also cleans the cub and by consuming the cub's waste, she recycles everything.

Bears sometimes wake up and move around in the winter. They may occasionally eat a little snow and urinate outside the den, but generally they do not eat or drink during hibernation. A bear may lose hundreds of pounds during the winter - 15 to 30 percent of its body weight - without really defecating or urinating. Instead, a bear recycles its metabolic waste. The urea, which is fatal at high levels, is broken down. The resulting nitrogen is used to build protein, which allows bears to maintain muscle mass and organ tissues.

"Some physiologists studying kidney diseases would love to understand that, and gain that insight in to how kidneys detoxify," Hechtel said.

Physiologist Tom Lohuis said the exact mechanisms are unknown, but it involves symbiotic bacteria in the bear's gut and a finely-tuned process that transports the nitrogen through the bear's system as it is recycled.

Lohuis said there is evidence that bears also "bulk up" different organs and muscles groups with stored protein, which bears need in addition to fat stores. One by-product of the breakdown of protein is water, which the bears use to metabolize their fat stores.

Fat breakdown provides bears with the calories they need, and fat is mostly carbon and hydrogen. Some of the waste is carbon dioxide and water, which they exhale.

"Bears don't exhibit the metabolic sign that humans do when humans fast," Lohuis said. "They're not eating of course, or drinking, and yet they are not starving - they have adequate nutrition. Their needs are met by internal reserves."

Sleep researchers are also looking at bears, Hechtel said. "Another big mystery is the hibernation induction trigger - nobody quite knows what triggers hibernation or causes bears to come out of it," Hechtel said. "There are so many interesting things with bears, and every year there are new insights."