Ice Fishing for the First Time 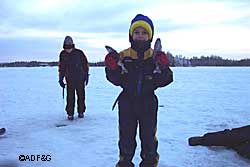 Jayton Rizzo shows off his catch.

“Hey, something took my bait!”

“It was a brave shrimp…”

These were just a few of the comments overheard on Sport Lake during the Alaska Department of Fish and Game’s annual ice fishing event. Despite the five-degree temperatures about 400 students, teachers and parents joined Alaska Department of Fish and Game staff for a day of ice fishing on Sport Lake in Soldotna. Catchable Chinook salmon and rainbow trout fingerlings are stocked annually by the Fort Richardson and Elmendorf state-run hatcheries.

As each group arrived, they were briefed on the legal limit of fish they could keep, shown how to properly use an ice fishing pole and taught how to ethically practice catch and release if they decided not to keep the fish.

“If the fish is kept out of the water too long or flops on the ice, it will lose its slime layer and scales,” said Fritz Kraus, an aquatic education biologist from the Anchorage Fish and Game office. “The skin will freeze and it will die if you put it back in the water.”

Kraus and Craig Baer from the Palmer office drove down the day before the event with 100 fishing poles and power augers needed to drill the 90 holes that dotted the lake.

Mason Mount caught the first fish of the day and a bald eagle eyed the catch from a nearby spruce tree. “It pulled a little, then it pulled more and I knew I had fish,” he said. Not only was he rewarded with a salmon for dinner, he was also given a small stuffed caribou for his effort. 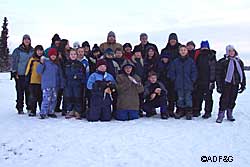 Chapman Elementary students at the end of their hour on the ice.

Mountain View elementary student Jayton Rizzo caught his first fish ever. He proceeded to catch two more king salmon before his hour was over. “I was so excited when I caught my first fish,” he told other students.

In addition to the Fish and Game staff helping with the event, three older students from Amy William’s life skills class at Skyview High School were on hand to help scoop the continually freezing ice out of the holes. As Williams showed student Nelson Deschene how he could watch the fish circle his bait, he said, “He keeps nipping at it. If I catch this fish, it will be my first one.”

This was the fourth annual ice fishing event held at Sport Lake. This event is part of the department’s Salmonids in the Classroom program and is one of the activities throughout the school year designed to give the students a greater understanding of the salmon life cycle and the importance of a healthy watershed. The ice fishing component is designed to show the students how they can enjoy the resource and learn to fish ethically and responsibly.

The students attend an egg-take in the fall and receive about 250 fertilized salmon eggs. They witness the lifecycle first hand in their classroom aquarium. They learn about healthy watersheds through classroom and streamside presentations. The students also have the opportunity to learn how a salmon functions through a hands-on classroom dissection. At the end of the school year, the surviving fry are released in a designated landlocked lake. Ultimately, the goal is to teach stewardship of their local streams and rivers.

Amy Williams showing Nelson Deschene how to watch the action under the ice.

Two other ice fishing events were held this winter in Southcentral Alaska. In mid-December 2,200 students from the Anchorage School District fished on Jewel Lake and on January 5 and 6, 900 students from the Matanuska-Susitna School District tried their luck on Finger Lake. Approximately 1,700 fish were hooked in the three events and 560 students caught their first fish ever. These students will be issued a First Catch Card to commemorate the big event.

Even though the temperature never rose above seven degrees, Dave Michael, the teacher from Tustumena Elementary commented that it was one of his favorite activities. He mentioned about half of his classroom parents came out to help with the event. The parents were on the ice, baiting hooks for kids with cold hands and just enjoying the excitement of the elementary students.

Patti Berkhahn is a fishery biologist with the Alaska Department of Fish and Game in Soldotna.