Lessons from a Juneau Bear 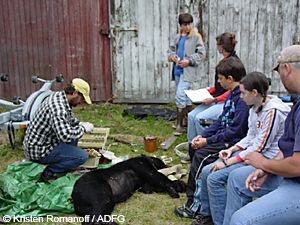 "I had no idea that bears were so smart," said Juneau middle school student Eli Olson.

Olson was looking over some remarkable information, data that he and his class had helped gather and interpret - the day-to-day activities of a black bear over a six-week period. This school year, Olson and his sixth-grade class have teamed up with the Alaska Department of Fish and Game to study the movements of a radio-collared black bear in the Juneau area.

Juneau has been plagued with an urban bear problem in past years. Scores of food-conditioned black bears have made thousands of nightly raids on neighborhood trash cans. A community-wide effort involving Fish and Game, Juneau police, neighborhood activists and the local waste management company led to significant improvements in 2003. Education was a key element.

To provide the Juneau community with a better understanding of urban bears, Fish and Game Area Biologist Neil Barten and I invited Mary Hausler's class at Dzantik'i Heeni Middle School to join us in placing a global positioning system (GPS) radio collar on a black bear and to then interpret the data once the collar was retrieved.

Before we collared the bear, Barten and I set the stage for the overall project. Students learned about the natural history of black bears, research methods, and strategies for managing refuse to prevent bears from becoming food-conditioned.

We planned to involve the entire class in trapping and collaring the bear, and then use the data to interpret the bear's activity. We were unable to capture a bear until after school had already let out for summer in 2003, so only a few students were available when a 7-8 year old sow was trapped. These fortunate few students assisted with the entire process and videotaped the collaring, and they brought the rest of the class up to speed once school resumed in the fall for the 2003-2004 school year. 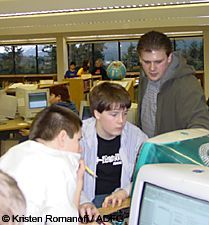 The plan was to release this food-conditioned near the end of the Juneau road system, about 30 miles north of town. The collar was programmed to automatically drop off after six weeks, and a signal would allow us to retrieve the collar, which by that time would be loaded with data about the bear's activities. With the collar was in-hand the data could be downloaded and meshed with maps and aerial photos to dynamically chart the bear's path during the six-week period she wore the collar.

The students posed questions and made predictions: How long did it take for the bear to return to town? Since she was already a food-conditioned bear, did she spend most of her time raiding garbage cans or were wild foods still important? How large was her home-range? In order to put the data to use, the school's computer technician had to download mapping software that was compatible with Fish and Game's software. Once we were up and running, the students quickly mastered working with the ArcVoyager mapping software, an educational version of Arcview.

"Look, she made a bee-line straight back to town," commented one student as she looked at the emerging data. We learned that the bear traveled about 25 miles in six days, returning to the trailer courts and neighborhoods, as well as the densely-wooded and steep slopes of adjoining Thunder Mountain.

The more the students worked with the mapping software, the more they learned - and the more questions they had. How fast did she climb Thunder Mountain? How often did she rest? When did the bear go into neighborhoods? 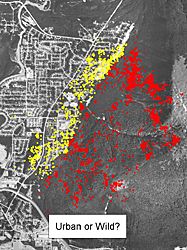 The GPS points are color coded, reflecting the number of points located in neighborhoods vs. those in the bear's natural habitat. Only 33% of the points were in the urban areas.

We found that the bear only visited neighborhoods after dusk, and spent two-thirds of her time in her natural habitat in the Thunder Mountain area. There was even a two-week period where the bear remained entirely on the mountain slopes, perhaps due to the peaking of the berry crop in the avalanche chutes and steep forested slopes.

One of the more striking discoveries was the bear's choice of travel routes. The bear always avoided the main roadways and sought cover from brush and trees when traveling through neighborhoods. In ascending Thunder Mountain, she chose to travel along the more open edges of the thickly vegetated avalanche slopes.

The project offered students tangible insights into the daily activity of an urban/wild bear, and provided valuable supportive information that addresses a long-standing Juneau problem.

"By having this type of information, we can use it to impress upon people living in these areas that sooner or later a bear is likely to pay them a visit," Barten said. "They need to anticipate a visit by storing their garbage and other food sources properly."

"The information from the GPS collar is also valuable in providing insight into the ability of a bear to subsist in the wild even though it was at least partially human food conditioned," Barten added. "This suggests that (this bear at least) was very capable of surviving without human food, pet food, and garbage. This gives me hope that these bears can stay wild if only we do our part by making these food sources less available."