Geoducks: Southeast Gets a Toehold in the Market
World's Largest Burrowing Clam Can Live 140 Years 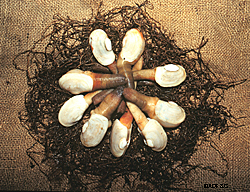 Geoducks can live for decades; growth rings on their shells have shown that some geoducks live more than 140 years.

Geoducks are the world’s largest burrowing clam. Pronounced “gooey-duck,” they aren’t gooey and they aren't ducks. Their name is derived from a Nisqualy Indian term meaning “dig deep.”

There has been a small commercial geoduck fishery in Southeast Alaska since the early 1980s. With the intent to diversify the state economy and highlight Alaska seafood in the world market, the Aquatic Farm Act of 1988 allowed The Alaska Department of Fish and Game (ADF&G) to issue permits for construction and operation of aquatic farms and hatcheries.

However, it wasn’t until 2002 that the profit potential of the geoduck harvest really took off. That’s when the Alaska Department of Environmental Conservation and Southeast Alaska Regional Dive Fisheries Association (SARDFA) established a more efficient Paralytic Shellfish Poisoning (PSP) monitoring plan. Test results are posted online immediately after being entered into the database, which allows more of the geoducks to enter the market live, not processed. The market price for live geoducks is $5 to $10 a pound, for processed it is less than $1 a pound. According to SARDFA, 90 percent of the 2004-2005 commercial season harvest was delivered live.

Not surprisingly, interest in geoduck farming has skyrocketed. “In the recent 2005 aquatic farm opening, over 97 percent of the 141 proposed aquatic farm sites are for culturing geoducks,” said Cynthia Pring-Ham, Mariculture Coordinator for ADF&G.

Currently, most of Alaska’s 400,000 pound geoduck harvest is destined for Hong Kong and China, where they sell for up to $30 a pound. Their texture has been variously described as sweet, crunchy, or rubbery.

“They are not necessarily as palatable to the North American market. They are considered a delicacy in Asian markets,” said Pring-Ham.

The most prized meat is the siphon, eaten raw, sashimi style with soy sauce and wasabi, or cooked in Chinese hot pot soups.

Geoducks reach sexual maturity at three years. After five to 10 years, when their weight is between two and four pounds, they are considered harvestable. They will continue to grow until they are about 15 years old and can reach weights of 14 pounds.

“In Washington state it takes seven years for geoducks to reach a harvestable weight of two pounds, but the waters are colder up here so they may grow slower in Alaska,” Pring-Ham said. “We don’t have complete growth data yet, since the most mature cultured geoducks at permitted farm sites are only three years old.”

The average age of geoducks harvested commercially in Alaska is 44 years.

Wild geoducks reproduce by “broadcast spawning” – releasing eggs and sperm into the water and relying on the movement of the water to unite them. Within 40 to 50 days, the immature geoducks will slowly burrow into the muddy ocean floor at the rate of about one foot a year. 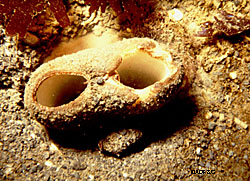 Buried in the ocean floor, geoducks are filter feeders, sucking in water through the incurrent siphon to extract plankton, and pushing the remaining water out through their excurrent siphon.

When they are about three feet deep, they settle in for life, unable to move from their burrows. A geoduck siphon may stretch to over three feet to reach the sea floor. Geoducks are filter feeders, sucking in water through the incurrent siphon to extract plankton, and pushing the remaining water out through their excurrent siphon.

Growth rings on their shell have shown that some geoducks can live for over 140 years.

Pring-Ham manages the mariculture program and issues permits for aquatic farms in Southeast Alaska. “We also do site inspections and provide technical assistance, guidance and training to farmers,” she said.

Every two years, the Department of Natural Resources (DNR) provides an opening from January to April to apply for a tidal submerged land lease. A lengthy, multi-agency six-month review of the application is completed; and if it meets all the state regulatory review standards, a lease from DNR and an operation permit from ADF&G are issued for a 10-year period. An average geoduck farm site is about six acres.

Sites must be surveyed to make sure that there are no more than 12,000 pounds of wild geoducks already existing on the farmsite. Recent legislation and court rulings have made it clear that sites that attract or support a commercial fishery will not be granted an operation permit. The department is working with the farmers to find ways to decrease the survey costs and time that it takes to do them, so data is more readily available to the department for making this decision. Delays in issuing the permit may occur due to current limitations on how many surveys can be done by the department each year.

Harvesting geoducks is no walk on the beach. They are usually found in water 25 to 100 feet deep, and then another three feet down in the muddy sea floor.

Harvesting is usually by “hookah” diving – wearing a drysuit and breathing air through a hose to the surface. This allows divers to stay down longer and work harder without the inconvenience of scuba tanks. Divers carry an air hose, or “stinger,” used to blow the mud and silt away from a geoduck. The blast from a stinger can stir up so much bottom silt that divers can no longer see, and must extract the geoduck by feel. Great care must be taken not to injure the geoduck’s neck or shell.

Other countries are looking to contribute to the lucrative geoduck market, Pring-Ham said. “China is starting to produce hatchery-raised geoduck seed for farming, so this may mean potential competition for the U.S.”