Got Moose?
Cows are Key to Altering a Moose Population 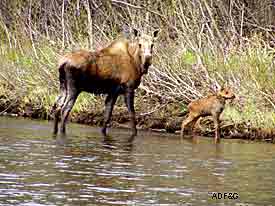 When looking for the most effective means for increasing or decreasing a moose population, cows are key.

Too many moose eating up all the willows? Shooting cows should help solve your problem. Want to grow a bigger moose population? Don’t shoot cows.

Cows are key to increasing or decreasing a population of moose. This is not to say that the bulls aren’t important, but let’s face it, it only takes one bull to happily service a number of cows.

But oh, the number of moose that one cow can produce. A healthy cow has approximately 15 reproductive years, which means she produces at least 15 calves. Because she’ll occasionally have twins, we’ll up the total to 20 calves in her lifetime. If half of these calves survive to adulthood, that one cow has added 10 moose to the population.

But there’s more. Let’s say half of those 10 calves are females, and each one of those five females produces 10 adult moose. That’s 50 moose added to the population from the original cow!

But wait - there’s even more. If half of these 50 moose are cows, that’s 25 cows that can each produce 10 adult moose. That’s 250 moose added to the population from the original cow!

There’s more, but you’re probably getting the picture by now. Basically, when you shoot a bull you remove one moose from the population. And as long as there are at least a few other bulls around, some fella will make sure the cows get pregnant. But shoot a cow and you remove the potential for adding hundreds of moose to the population.

Now you can see why cows are the major players if you’re trying to adjust the size of a moose population. Say you have a lot of prime moose habitat and not many moose – protect every last cow. Their reproductive potential will really help grow your population—as long as you have at least a few willing bulls around.

In the same way, if you have too many moose, shooting cows—and eliminating their reproductive potential—is more effective in reducing the population than just shooting bulls.

How can too many moose be a bad thing? Moose don’t migrate from food source to food source the way caribou do. If a local moose population grows to the point that they are eating up their available food, they face the possibility of mass starvation when a hard winter hits.

Of course, there are other circumstances that affect moose populations: predation, hunting pressure, fires, even global climate change. Managing wildlife populations is a juggling act with a lot of balls up in the air. But when looking for the most effective means for increasing or decreasing a moose population, cows are key.