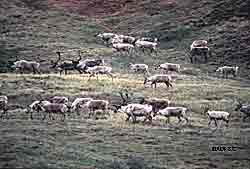 For the better part of this past winter, the Board of Game worked with the public to design a new approach for a Tier II hunt in the Nelchina Basin. ADF&G photo

The Alaska Board of Game strives to provide subsistence hunting opportunities fairly among all residents under the current state law. But sometimes the demand is greater than the available resources and not everyone can be satisfied. The Tier II system attempts to allocate game among subsistence users. Tier II hunts are subsistence hunts for Alaska residents and a limited number of permits are issued. But who is eligible for these permits and how they are issued is contentious.

The Alaska Board of Game constantly receives complaints about inequities of the Tier II permit system. The current system is, by the Board’s own admission, fraught with problems. In an effort to address these problems, the board met in June and considered potentially sweeping changes to the system.

For the better part of this past winter, the Board of Game worked with the public to design a new approach for a Tier II hunt in the Nelchina Basin. While the proposal was not implemented, the process provided opportunity to voice new ideas and bring people together for discussions.

The board formed the Subsistence Implementation Committee this past winter; a committee comprised of board members, advisory committee members, department staff, and residents of affected communities and regions. The purpose was to explore ways in which the permits for the Tier II caribou and moose hunts in the Nelchina Basin can be issued so that access is given to people who have the greatest historic reliance, while still giving others some opportunity to participate in a hunt. Meetings were held with advisory committees and local residents throughout the region to solicit suggestions and comments on the subsistence proposals brought before the Board.

At a meeting in early June, the Board of Game discussed the work of the Subsistence Implementation Committee. The committee had worked hard on an idea that is not new in the “fisheries world”—a type of super-exclusive use area. The idea is that the system would give advantages to hunters who agree to hunt and trap only in newly created special subsistence use areas, while providing opportunity for other hunters to win drawing permits for areas from which they are now excluded by the Tier II system. In exchange for guaranteed access, hunters in these new special subsistence use areas would forego opportunities elsewhere in the state.

The board decided to not implement the concepts brought by the Subsistence Implementation Committee at this time, and further work and discussion statewide is needed regarding the Tier II permit system.

No change is ever easy or completely satisfying, and with the current subsistence hunting system that is certainly the case. The system is very complex, as are the associated issues. For now subsistence hunts will run their current regulatory course.