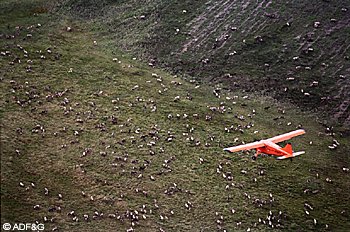 Alaska's largest caribou herd, the Western Arctic Caribou herd, has grown to at least 490,000 animals, according to a survey recently completed by the Alaska Department of Fish and Game.

This vast herd ranges over a 140,000 square-mile area bounded by the Arctic Ocean, the lower Yukon River and the trans-Alaska pipeline. About 40 communities and 13,000 people are located within the range of the herd. For the indigenous people of these communities, the herd is both a vital link to their cultural heritage and a staple of their diet.

There is also growing use of the Western Arctic Caribou Herd by resident and nonresident hunters living outside the herd's range. These caribou are an important source of income for commercial operators that provide services to these hunters.

Because of its tremendous size, the ecological importance of the Western Arctic Herd to Northwest Alaska is incalculable. Although they are important prey for wolves and bears, these caribou directly and indirectly impact the entire food web through nutrient cycling - affecting organisms from bacteria to moose.

Wildlife biologist Jim Dau, Alaska Fish and Game's lead biologist for the Western Arctic Caribou Herd since the late 1980s, estimates the herd has grown about one percent annually for the last 10 years. That's significant for this herd, which crashed in the mid-1970s from about 242,000 to 75,000 animals.

Counting almost half-a-million caribou is no easy task. Radio-collared caribou and low-altitude photography are two key components. The census was staged out of a remote airstrip on the western North Slope last July. A team of 13 biologists and four planes were involved, including a Beaver fitted with a large format U.S. Geologic Survey mapping camera. One or more planes radio tracked the herd daily to determine whether conditions were right for the photography.

"The sample of collared caribou tells us two things," Dau said. "They obviously lead us to the groups, but they also indicate what proportion of the herd is present. Seventy five percent of a herd this size looks like all the caribou in world are beneath the plane. But until we are certain at least 90 percent of all the collared caribou are present, we know we need to keep looking for other groups.

During the census the Department determined 97 percent of all collared caribou were present in the various aggregations of caribou. Once suitably aggregated, the Beaver flew transects over each group and shot photographs at a regular interval so that each photograph overlapped on all 4 sides.

While the Beaver photographed large groups of caribou, two Piper Cubs and a Cessna 185 radio-tracked caribou and searched for small groups that did not contain a radio-collared animal. When a group was found the Beaver was either called in to photograph it or the animals were counted directly from the plane. 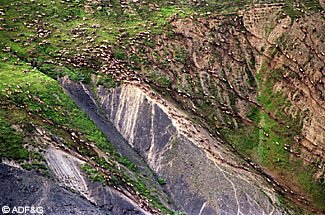 Once back in town the photos were laid out and areas of overlap marked so that no caribou were double-counted. "It took 11 of us three days to put the overlap lines on photos," Dau said. "It's a big job and a critical part of getting an accurate count."

With the overlap lines marked, the tedious task of counting began. The Department took more than 1,100 9-inch by 9-inch photographs to capture the herd on film.

Most of the actual photo counting was done by Don Williams, who lives in the heart of the range of the herd in Ambler, on the Kobuk River. Williams has worked with Fish and Game for many years radio-collaring caribou and, more recently, counting census photos.

"He's really into it! He pores over each photo and does a wonderful job on a task that most people would consider intolerable," Dau said. "Don counted about 85 percent of the photos for this census."
biologist counting caribou
Alaska's Western Arctic Caribou herd forms aggregations or groups that can stretch for miles.

The herd is on a three-year census schedule. The Department attempted a census during July 2002 but high wind, snow and fog forced a one-year delay. Weather almost prevented the 2003 attempt as well.

"Weather delayed our start by one week," Dau said. "Then, once we were there, weather conditions were still marginal for the caribou to aggregate. High wind, clouds and cool temperatures subdued levels of insect activity. Without intense harassment by mosquitoes, warble flies and bot flies, caribou don't form the huge aggregations we need to photograph the entire herd."

Since the Western Arctic Caribou Herd crashed in the mid-70s, biologists and hunters have been concerned that the herd could experience a similar drop in coming years. According to Dau, Western Arctic caribou have generally been in good body condition during fall. Following several recent mild winters caribou were in relatively good condition even during spring.

"The body condition of caribou is really the ultimate expression of their habitat in terms of quantity, quality and availability of their food," Dau said.

To determine if diseases are present in the herd, biologists have systematically collected blood samples from the caribou since 1992. Dau said the data so far indicates that disease is currently not a problem for this herd.