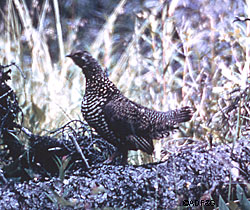 Spruce grouse favor the boreal forests of Alaska and Canada, and those on Prince of Wales Island represent an unusual population inhabiting a coastal rainforest.

Southern Southeast Alaska - Prince of Wales and a few adjacent islands - may be the only place on Earth where spruce grouse occur in a temperate rainforest.

“This is unique. Spruce grouse are not generally thought of as a coastal rainforest species, they’re not even associated with it,” said biologist Amy Lee Russell. “No other spruce grouse occur in this kind of ecosystem.”

Russell said spruce grouse are found in a transcontinental band of boreal forest stretching across northern North America. The species name, Falcipennis canadensis, is appropriate: the range covers most of Canada and just barely extends into the northernmost states of the Lower 48.

Russell spent seven years in the mid 1990s researching the Prince of Wales spruce grouse. She worked for the U.S. Forest Service at the time, and earned a master’s degree for her study of the behavior, distribution and morphology of the Prince of Wales spruce grouse. Her work included tracking and monitoring 19 radio-collared birds, and she observed their unusual courtship behavior.

Few people have witnessed the birds’ courtship, she said, which usually occurs right around dawn. Having the radio-collared birds allowed her to track her subjects and locate them at dawn in mating season early April.

“They do this really fancy wing clap,” she said. “They leap up off ground, and throw their wings up behind their head and create this clapping sound. Their wings are actually clapping together behind their back. It’s loud if you’re close, but it doesn’t really carry. Then they dive back down to the ground to court the female.”

Russell said they spend the first two weeks of April with courtship and mating, and they’re on nests most of May.

“Spruce grouse are found in just a small area of southeast Alaska, on Prince of Wales and a few of the outer islands, and they’re absent from areas to the east, north and south,” Russell said. Blue grouse and spruce grouse tend to be mutually exclusive, she said.

Russell said the birds are capable of sustained flight for only about one mile, and six miles of water separate the island from the mainland to the east. The birds may have colonized the island during the ice age when ice may have bridged the gap, and have since become isolated.

“We figure they’ve been isolated from other spruce grouse populations since late Pleistocene, probably 12,000 to 14,000 years,” Russell said. “That’s long enough to develop morphological and behavioral differences, even if they are subtle.”

“(Biologist) Craig Flatten says, ‘It’s because they’re wet all the time,’” Russell said, laughing. “I don’t know why it is.”