Managing Moose in the Sub-Arctic 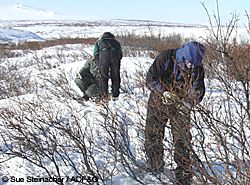 ONE COLD JOB: Biologists Kate Persons and Tony Gorn, on the weekend the wind-chill plummeted, assessing the quality of moose habitat in Banner Creek by measuring the browsed willows.

Most of us would agree that moose meat in the freezer is a good thing. But if everyone could shoot a moose - any moose - wherever and whenever they wanted, the moose population would be hit pretty hard.

This wasn't always the case - but guns, motorboats, four-wheelers, and snowmachines have made it easier for more people to harvest moose, and our human population keeps growing.

This is where game management comes in. Bag limits, seasons and other regulations are all tools wildlife biologists use to balance the human need for moose meat against the needs of a healthy moose population.

Wildlife biologists often begin by trying to estimate the size of a moose population. They also look for signs that indicate whether a population is increasing, decreasing or stable. It isn't possible to reliably count every individual moose. Instead, biologists conduct a census where they estimate the number of moose by systematically sampling an area.

Wildlife management is not a precise science, and biologists don't claim that census numbers are 100% accurate. But when a census is conducted in a consistent manner over time, some pretty reliable trends and estimates can be determined.

An aerial census for the southern portion of the Seward Peninsula, the area around Nome, Alaska, (Game Management Units 22B and 22C) was conducted this March under the direction of Kate Persons, the area biologist for the Alaska Dept. of Fish and Game. The Bureau of Land Management also provided personnel and financial support to the team of planes and people needed to conduct the census.

Western Unit 22B moose numbers down
The recent census of the area bordering northern Norton Sound and the Darby Mountains (western Unit 22B) estimated approximately 586 moose. That represents a significant decline - the 1987 census estimated the population at 1,894 moose. This indicates that the moose population in western Unit 22B has decreased 27% since the 1999 census, and 64% since the 1987 census. Not good news.
HOW MANY CAN YOU COUNT? In an aerial moose census the size of the overall population is estimated from the number of moose seen in a sampling of areas.

Persons said the decline was precipitated by the moose population outgrowing the available food resources in the area. Predation by brown bears has continued to hold down the population as well.

An indicator of the health of a moose population is the ratio of moose calves to adults. In western Unit 22B the census identified approximately 10 calves to every 100 adult moose. Persons said this is also not good news. 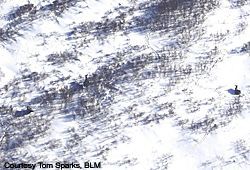 HOW MANY CAN YOU COUNT? In an aerial moose census the size of the overall population is estimated from the number of moose seen in a sampling of areas.

"This is not enough young moose to replace those that die each year from predation, hunting and natural causes," she said. "This has been the case in western Unit 22B for over 10 years, so it's not surprising that the moose population has steadily declined."

Persons stressed that he continued decline in western Unit 22B is a serious concern.

"We will need to reduce the harvest quota for this area next fall, and work with local people to determine what long-term steps should be taken to protect this declining population," she said.

Unit 22C moose numbers holding
The recent census of the area immediately surrounding Nome (Unit 22C) yielded more positive news. The number of moose was estimated at approximately 530 moose. There has not been a measurable change since the 2001 census.

The ratio of calves to adults was also strong. It was estimated that there were 23 calves to every 100 adult moose.

Person's was pleased with the results.

"We are still above our management goal of 480 moose in Unit 22C," she said, "in spite of high winter mortality in 2001, and an annual antlerless hunt that has allowed up to 20 cows to be taken each fall since 2000."

Persons and assistant area biologist Tony Gorn were recently trained to assess the impact moose browsing has on willows, the primary food of moose. This information will help them answer the questions: Could the unit support more moose? Are the moose numbers in balance with the amount of willows available in winter? Or is the population growing too large for the amount of willows available, particularly in winter?

Once Persons and Gorn complete their willow browse study this spring they plan to reevaluate their moose population goals for Unit 22C.

"If the habitat can clearly support a larger population, and people want more moose in Unit 22C, the cow harvest could be reduced or eliminated," Persons said." But if we learn that there are not enough willows to feed the current number of moose, it would be wise to increase the cow harvest to reduce the population."

By managing human harvest levels, ADF&G hopes to avoid another moose population crash like those in Units 22B and 22D ten years ago, when the numbers of moose outgrew the available food supply.