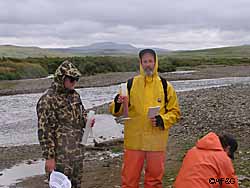 Sampling crew (Drs John Clark and Tom Quinn) in action on Funnel Creek. Sampling of dead sockeye salmon was conducted throughout the Alagnak River system to determine the level of egg retention due to high spawning densities in the system in 2004.

“It’s one of the most important salmon fisheries in the world,” said John H. Clark, chief fisheries scientist with the Alaska Department of Fish and Game.

Fisheries managers set escapement goals to ensure that harvests are sustainable - escapement refers to the fish that are allowed to “escape” the fishery and enter the river to spawn.

Fishery management has restricted ocean harvests based on Kvichak River stock. However, managing for Kvichak stock over the past few years has virtually guaranteed over-escapement in the Alagnak River.

The Alagnak River system cannot handle such a huge number of spawning fish. In addition to the crowded conditions resulting from massive over-escapement, there is limited suitable spawning habitat. Clark and several fellow fisheries scientists took egg samples from the females and determined that in some areas only 14% of the female salmon had successfully “spawned out.” In the Moraine Creek area, where up to 60% of females successfully spawned in late August, the stream level dropped by about one-third over the next two weeks, killing many of the eggs. 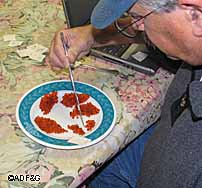 From 2002 to 2004, fish were again counted by both tower and aerial surveys. The tower was moved up the river, where visibility is better, to obtain a more accurate count.

The escapement underestimation goes beyond this, however. In Clark’s report Abundance of Sockeye Salmon in the Alagnak River System of Bristol Bay Alaska he states, “… the use of this faulty assumption over a 24 year history has undoubtedly introduced errors into a variety of information and statistics that are critically important to current day fishery management in Bristol Bay.”

Social factors in fishery management
In October of this year, the King Salmon Village Council submitted an Agenda Change Request to the Board of Fisheries. An Agenda Change Request asks that a fishery concern be discussed outside of its regular cycle; each fishery comes up for discussion every 3 years. Bristol Bay is not up for discussion until 2006.

The Agenda Change Request asked the Board of Fisheries to develop an optimum escapement goal for the Kvichak River or combine Kvichak and Branch (Alagnek) rivers for one escapement number with an optimum escapement goal. Many of their tribal members are fishermen and are feeling the economic pinch of fishing restrictions due to declining Kvichak River stock. In 2003 Kvichak River sockeye was elevated to a “stock of management concern” by the Board of Fisheries. The Agenda Change Request was denied. 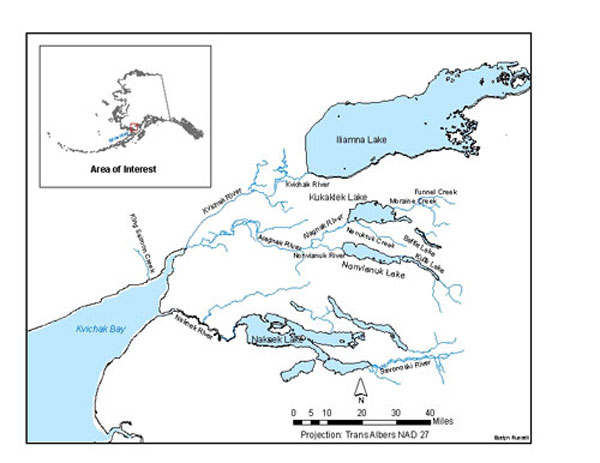 map of the Alagnak River system

“I think we’ve got enough problems with Kvichak without creating more, and based on everything I’ve heard, unfortunately I don’t see that this is an answer to being able to get at those Alagnak River fish. It seems to me that we’re still having a problem of getting these fish up the Kvichak,” said Melvan Morris, board member from Kodiak.

Dr. Fred Bouse, board member from Fairbanks, added “We do have a lost opportunity to harvest those fish. But we don’t want to further endanger the Kvichak. I can’t find any way to do that – not yet.” He conceded that this was a lost harvest opportunity and would like this issue addressed in the future.

There is currently a petition to the Board of Fisheries by Al Bauman of the Kvichak Set Netters Association to allow inriver fishing in the Alagnak River, but no decisions have been made on that yet.

What is being done?
This year Fish and Game received $70,000 in research and development funds from the Fisheries Revitalization Strategy to study the Alagnak River over-escapement. This one-time grant of federal disaster funds will be used to study the effects of the enormous excess escapement.

The study, which began in August and is conducted by ADF&G Commercial Fisheries Division staff, will gather data on spawning distribution, pre-spawning mortality, egg retention, nutrient and plankton levels, and smolt production.

Clark suggests that the Alaska Department of Fish and Game should give more consideration to a fishery management solution that includes the Alagnak River sockeye stock, and give serious consideration as to how best to sustain the salmon fisheries of Bristol Bay given that the Alagnak stock of sockeye salmon is currently one of the largest runs of fish in the Bristol Bay area.

“We need to figure out the best mix to achieve reasonable conservation goals,” Clark said.