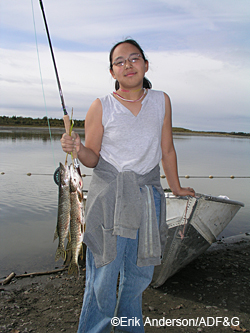 A Kalskag student shows her catch, a pair of northern pike.

(Erik Anderson is an Aquatic Education Specialist for the Alaska Department of Fish & Game’s Division of Sport Fish. One of the more enviable aspects of his job is traveling around Interior, Northern, and Western Alaska teaching about topics such as watersheds, plankton, aquatic invertebrates, and fish. Erik teaches students about the natural environment so that as stewards of Alaska, they will be responsible users of our valuable fish and wildlife resources.)

In early September, I was invited to take part in an innovative new school program in Kalskag, Alaska. The junior high and high school students begin the school year by staying in a traditional fish camp for a week. The students set up the camp and then spend the week hunting, fishing, and most importantly, learning from village elders.

Earlier in the summer, I worked with a group of teachers from rural Alaska. They were taking a graduate course at the University of Alaska Fairbanks called “Place-Based Education,” which looked at using the natural environment as an extension of the classroom. After showing the participants how to sample aquatic insects and describing their place in aquatic food webs, a teacher from Kalskag mentioned that the activity would be perfect for her school’s upcoming trip to fish camp and invited me to come along.

Kalskag is actually composed of two villages – Upper Kalskag and Lower Kalskag. These small, Yup’ik Eskimo villages are located on the Kuskokwim River in Southwestern Alaska. It’s a landscape of tundra and scrubby patches of willow that border the numerous sloughs and streams that feed into the Kuskokwim.

Traditionally, Yup’ik Eskimo families from the Kalskag area spent summers in fish camps, using set nets and fish traps to harvest from the abundance of anadromous fish on their spawning migration. The Kuskowkim receives all five species of Pacific salmon (Chinook, sockeye, coho, chum, and pink. In addition, whitefish, northern pike and Arctic grayling are plentiful in the river and its tributaries. These days, many families still spend a part of each summer at fish camp, cutting and drying fish to help sustain them through the winter.

Some families, however, no longer go to fish camp. The start of the school year in August conflicts with the end of the fall run of coho salmon. Because of this, the principal, teachers, and community members of Upper and Lower Kalskag decided to begin the school year by taking the students to fish camp. This camp serves to better connect the school with the community. Fish camp provides a setting for the traditional ecological knowledge of the elders to be passed along to village youth 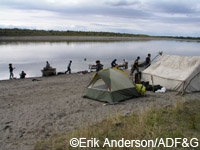 Fish camp on the Kuskokwim River near Kalskag. All photos by Erik Anderson

A trip to rural Alaska typically involves a number of flights on progressively smaller planes. From Fairbanks, I flew nearly 400 miles south to Anchorage. Transferring to a smaller jet, I flew west to Aniak. Finally, I boarded a small, six-seat bush plane for the 15 minute flight to Kalskag. I was enthusiastically greeted at the landing strip and driven to the school on a bumpy dirt road.

The lobby of the school was buzzing with excitement as the students brought in duffle bags filled with sleeping bags, tents, rubber boots, extra coats, and of course, CD Walkmans and MP3 players. Despite the fact that it was a balmy 60 degrees outside, all the students had enough experience in boats to know that it was wise to bundle up for the chilly 40-minute ride downriver. After hauling the supplies to the river, the 40 students put on winter jackets, stocking caps, and snow pants for the ride. Members of the community volunteered their time, and it took four trips in two boats to shuttle the students, elders, teachers, chaperones, and supplies to the fish camp.

The first thing I noticed upon stepping out of the boat was the number and variety of animal tracks on the bank of the fish camp site. Wolf, grizzly, black bear and moose tracks were abundant. The students were divided into two groups – one group was set to work collecting driftwood to get a fire going, while the second group began putting up the canvas wall tents that would be home for the rest of the week. In no time , the tents were up and we were all lunching on hot dogs cooked on sticks over the fire.

That evening, I was able to work with a group of junior high students. With the set of fly rods that I brought from Fairbanks, we practiced fly casting on the shore. I had planned for a systematic series of lessons on fly casting, fly selection, and technique and presentation before doing any actual fishing, but we were in fish camp and of course, these kids wanted to fish. They practiced fly casting for only about 10 minutes, and then began clamoring for flies so they could fish. With that, we tied on some classic salmon flies and began fishing for coho salmon. Despite seeing them finning and jumping in the eddies, we just couldn’t coax them to take a fly, and I was feeling a bit embarrassed because very few, if any, Kalskag residents fish with rod and reel. Here I was introducing them to this new way of fishing and having no success, while their traditional means of catching fish —the gill net vibrated with the telltale splashes of numerous cohos and plentiful whitefish. The elders in camp suggested that we walk upriver a bit to a small slough that should have northern pike. 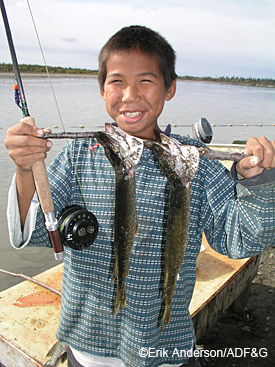 Kalskag student Tyler Charles Edwards on the Kuskokwim River, with a brace of pike taken on an egg sucking leech pattern. This was his first flyfishing experience.

I showed the students how to tie on wire leaders above the fly. Within minutes of making short casts into the slough and stripping the flies back to shore, the kids started catching pike. Northern pike are renowned for the quickness and voracity of their strikes.. Finally, we had our own splashes, signaling that fish were being caught! I was running from one student to the next, helping to remove the hooks from freshly caught pike, and I could barely keep up. Anything bright and flashy that dropped below the surface attracted this lie-in-wait predator – pink zonkers, Clouser minnows, Lefty’s deceivers and the quintessential, all-purpose Alaskan fly – the egg-sucking leech.

It was a satisfying and self-redeeming walk back into camp that evening with each student holding a fish or two to augment dinner. We combined a lesson on fish anatomy with a lesson from one of the elders on how to cut and clean a fish.

For the next two days, I took the remaining students out fly fishing in small groups. We also looked at the many different types of aquatic insects in the slough that support the fish populations. It really helped the students understand what fly tiers attempt to mimic when tying those bits of fur and feather on hooks. Each group was able to bring back fish to contribute to the camp. The elders then showed the students how to make slow burning fires in order to dry fish.

When I wasn’t teaching, I was able to watch what some of the students were doing in the other groups. In one group, elders showed students edible and medicinal plants as they hiked along the river. In another group, elders taught Yup’ik Eskimo words and phrases related to fish camp. As the students rotated through the different activities, I was wishing I was a student myself participating in all the lessons of fish camp..

The night before I left, I was jolted awake in my tent at 2 am by the sound of howling wolves. The next day, we found their tracks within 200 yards from camp. It was a perfect send off. I applaud the communities of Upper and Lower Kalskag, and the principal and teachers of George Morgan Senior School for putting together this camp - including the traditional ecological knowledge of the elders in the curriculum and bringing science education into the spectacular beauty of the Kuskokwim River drainage. I was happy to hear that the school and community will continue to start the school year off with fish camp in upcoming years.