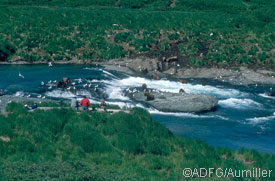 McNeil River State Game Sanctuary in Southwest Alaska, is one of the state’s (if not the world’s) premier bear viewing areas.

I stepped out of the wooden outhouse, exhaled and gingerly closed the door. The inside of the door is plastered with cartoons about bears. Comic strips clipped from newspapers depicting bears and garbage, bear safety, bears and habitat – all things “bears.” This is appropriate for an outhouse in the campground at McNeil River State Game Sanctuary in Southwest Alaska, one of the state’s (if not the world’s) premier bear viewing areas. It is a wild place with few amenities, where bears go about daily activities under the close gaze – sometimes arm’s length – of people visiting from all over Alaska and the world. Staff at the sanctuary has watched as many as 144 bears feasting on salmon at McNeil River falls throughout the summer. Sanctuary manager Larry Aumiller, a McNeil River legend in his own right, has counted 72 bears in view at McNeil River falls at one time. This was my first visit and I was excited and grateful to be in a place where bears and humans have coexisted safely for more than 30 years.

The landscape is accentuated by the browns and greens of tundra brush and the gray of mud flats near the river. The sanctuary, managed by the Alaska Department of Fish & Game, encompasses over 200 square miles. Sloping mountains, thick tundra and wet riverbanks give way to the coastline of lower Cook Inlet. A gravel spit juts into the inlet of Kamishak Bay, providing floatplanes with a buffer from ocean chop and offering access to the sanctuary.

With Mt. Augustine as a backdrop, visitors’ colorful tents dot the small campground, which includes a cook cabin, two staff cabins, sauna, viewing deck and trails to the two out houses. Visitors to the sanctuary are led from the camp to one of two destinations –either Mikfik Creek or viewing platforms at McNeil River falls. Ten permits for a two-and-a-half-day visit are awarded through a lottery run by ADF&G. Three standby permits allow visitors to camp in the area and participate in viewing should a spot open up through a no-show.

The camp experience itself is worthwhile. I spent an entire day meandering between a log stump at the edge of camp - a natural bear-watching seat overlooking the mudflats and gravel spit - and hanging out in the warmth of the cook cabin, writing in my journal and visiting with others who had stayed behind. I watched a mother and cubs make their way along the mudflats, shot pictures of the mountains and got face-to-face with the wildflowers sprinkled throughout the area, practicing with my new macro lens.

When we leave camp our group takes the mile-and-a-half long trail through tall sedge, below rocky bluffs and through sticky mud to visit Mikfik Creek. It’s early in the season and bears are showing up to feed on the lush, waist-high sedges, and to fish for the first salmon flopping their way up the creek. We watch single young adults honing their fishing skills in the relative calm of the creek. Later in the summer these same bears will likely head to McNeil River falls, where they will compete against larger and more experienced bears for salmon. 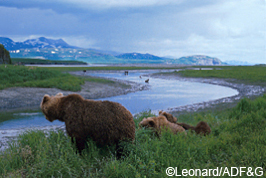 AtMcNeil River, bears go about their daily activities undisturbed by the people observing.

One day we spend almost an hour watching a determined male follow a skittish female up and down the creek, in his effort to mate. Each day, three sets of mother and cubs visit the creek to play or nap along the bluffs overlooking Mikfik. Another afternoon, our entire group is mesmerized as a mother and her two cubs amble by just a few feet away. One of the yearlings pauses to look us over and the only sound is the excited clicking of cameras.

Outside camp our group is never without a staff escort, either Larry Aumiller, Tom Griffin or Josh Peirce. It is daunting to follow an armed guide, but it is comforting to know the gun is there - and that they have never had to use it. Visitors are taught how their behavior affects the bears, and appropriate behavior has kept visitors and bears safe since the program began in the mid 1970s. By taking the same routes, staying in a quiet group and behaving calmly, humans have become a part of the environment for these wild animals. The bears know we are there, but they don’t consider us a threat or a source of food as long as we continue to act in predictable ways.

The sanctuary staff is a wealth of information and stories about bears, and dinner table discussions in the cook cabin range from bear behavior and foods to habitat and conservation. Visitors speak reverently about McNeil, and how their visit has influenced them in some profound way. Each of us takes away a heightened appreciation for this special area where, for a brief period, we are a part of these animals’ environment.

I learned more about respecting wild bears and other animals from this experience than any other outdoor trip I have been on in Alaska. McNeil River shows how people can learn about animals in the wild and enjoy a quality viewing experience.

Interested wildlife viewers can obtain permit information on-line for Alaska sanctuaries at www.wildlife.alaska.gov and by looking under the heading “refuges and sanctuaries.”

Permit applications to view brown bears at the McNeil River State Game Sanctuary are currently being accepted and must be submitted online or mailed by March 1. Mailed applications must reach Anchorage by March 15. There is a non-refundable application fee of $25 per person. Applicants are entered into a lottery and if drawn, residents pay a $150 viewing fee and non-residents pay $350.