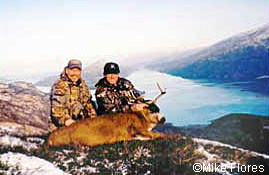 Blacktail are closely related to the mule deer of western North America, and the species even hybridize where their ranges overlap. Blacktail deer range up the Pacific coastline from Northern California to Juneau, and have been introduced to Yakutat, Prince William Sound and Kodiak Island. An attempt to introduce deer to the Kenai Peninsula in 1923 was unsuccessful.

Although blacktail are indigenous and abundant on the islands of Southeast Alaska, there’s something special about Prince of Wales Island. Boyd Porter, the Area Biologist based in Ketchikan with the Alaska Department of Fish and Game, said Admiralty, Baranof and Chichagof Islands (known as the ABC Islands) have small deer - and a lot of them. Prince of Wales has fewer deer, but they have larger bodies and bigger antlers.

“People brag about the fact these deer get up to 180 or 190 pounds,” he said. “A lot has to do with predators, but it’s also genetics, weather and food, all those working in an intricate relationship. Prince of Wales has a lot of things that deer need, and in good supply. It’s a very rich ecosystem.”

Porter said the old growth forest on Prince of Wales is a fertile environment. The island is underlain by limestone, and limestone-influenced soils tend to produce nutritious vegetation.

“There’s some talk that plants that grow over limestone have higher nutritive quality, and that may contribute to larger antler growth,” said former Ketchikan Area Biologist Doug Larsen. “Predators keep animals well below carrying capacity, and where deer densities are not as high, they tend to produce larger deer. There’s less competition for food because of fewer animals. Mild weather makes a big difference, because food can be available through out the year.”

Black bears and wolves prey on deer on Prince of Wales, but wolves aren’t found on the ABC Islands. Bear are seasonal and opportunistic predators of deer, unlike wolves. Bears kill fawns in the spring, but when fawns are just a few weeks old they are better able to avoid bears. Wolves are effective predators on adults, and 90 percent of the wolves’ diet on Prince of Wales Island is deer.

“The ABC Islands do have brown bears, but the birthing event swamps the predators,” Porter said. “For the most part, bears don’t take many adult deer year round, it’s a spring phenomena. On the other hand, wolves take them year around, and a lot more of them.”

Predation is a dramatic influence, but Porter pointed out that it’s an interaction of different factors. Vancouver Island, a few hundred miles south of Prince of Wales Island, has wolves, bears and mountain lions all preying on the island’s population of Sitka blacktail deer. Deer persist there, but the animals are small.

Winter weather is a major issue for deer. Deep snow, and especially snow that persists into the spring, can wreak havoc on a deer population. When snow gets brisket-deep on deer they expend a lot of energy getting around. It also makes finding nutritious food difficult, and predators are more likely to be successful.

“Deer can survive on fat reserves and a maintenance diet if snow doesn’t persist,” Porter said. “Deep snow by itself not a big issue, but harsh winter weather combined with persistent snow is very bad.”

When snow is deep, deer are restricted to the beach. If the snow persists to the spring deer can exhaust the available food supply, and their fat reserves. Consequently, deer populations fluctuate widely in some areas depending on the severity of winters.

“We see heavy mortality those severe winters, so it’s a boom and bust situation,” Porter said. “If you have back to back hard winters - you knock the population back and then hammer them again - it can decimate deer populations. After the hard winters of ’70 and ‘71 in Southeast Alaska there were piles of dead deer on the beach fringes, and the season was closed for over ten years in some areas.” 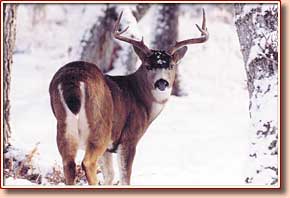 Deer from Kodiak and Prince of Wales Islands are some of the largest in Alaska. Photo by Mike Flores

In recent years, conditions have been favorable, and Porter said that bodes well for deer on Prince of Wales and surrounding islands. Hunters should find the coming seasons a good time to look for trophy-sized deer in southern Southeast Alaska.

“We’re going on six mild winters on a general scale, and more like 10 to 12 on a larger scale,” he said. “I think we’re seeing more large body (deer) and large antler size than we have in a long time.”

Kodiak Island is very different from Prince of Wales, and is even more renowned for producing big deer. The majority of Alaska’s trophy blacktail have come from Kodiak and adjacent islands - and all those deer are from a source population of about two dozen animals.

Kodiak Area Biologist Larry Van Daele said there is some evidence that deer may have been introduced to Kodiak around the turn of the century, but numbers weren’t high. Territorial records show in 1924, 14 deer from the Sitka area were released on Long Island, adjacent to Kodiak. In 1930, two deer from Prince of Wales were released. There was little indication of success, so in 1934, nine deer were captured near Petersburg and introduced to Kodiak Island. A population established and grew, and legal hunting began in 1953 and 38 bucks were taken. By the late 1960s deer had moved to adjacent Afognak Island as well. By that time, it was apparent that deer were thriving – the harvest in 1967 was 1,500 deer.

Van Daele attributes the success of deer on Kodiak primarily to the habitat. The northern end of Kodiak Island, and Afognak Island, is dense Sitka spruce forest. The rest of the island is open alpine terrain of brush, grass and tundra. When winters are mild, deer are able to put on body mass, and with it, big antlers.

“You get the bad with the good, though,” he said, “When we have hard winters, there’s not a lot of cover from deep snow, and we can have some pretty severe winter kill. The winters of 1998 and ‘99 hit Kodiak pretty hard.”

Predation is not a big factor on Kodiak, unlike Prince of Wales. Although Kodiak is famous for its big brown bears, they are not a significant predator of deer, Van Daele said.

Flores said deer on Afognak Island and the northern, more wooded end of Kodiak Island average 90 to 110 pounds, although larger animals are sometimes taken. The bigger deer come from the more remote south and west side.

“People kill the bigger bucks in the alpine areas where they are harder to get,” he said. “There are no roads for 60 miles.”

That’s where Anchorage-based hunter John Frost has taken three Pope and Young record book blacktail with his bow. He said most people like to hunt when the deer are in rut in the fall, but he prefers hunting in August and September, to take advantage of the longer daylight hours. A big part of the appeal of Kodiak is the visibility in that open country.

He said it’s a lot like sheep hunting. In the summer, the bucks are not running around chasing does and tend stick to the same place, making them easier to stalk. The meat is far better quality in summer than fall, he said. The only disadvantage is that the cape is prettier in October, and makes a more attractive mount.

Frost has seen the population fluctuate in extremes, and concurred that the hard winters in the late 1990s killed deer in large numbers on Kodiak.

“The population is coming back now, and I’ve been seeing more big deer,” he said. “The best time is ahead. I expect good hunting in coming years.”