By Arin Underwood and Riley Woodford 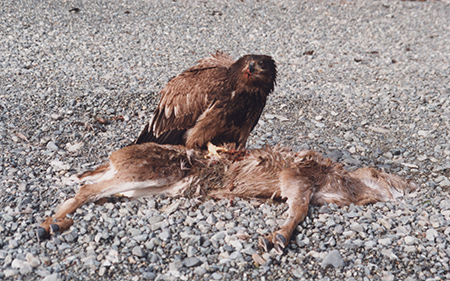 Sharp-eyed scavengers like eagles are quick to spot the remains of a successful hunt. Gut piles left by hunters are an easy meal to peck into and a good food source during the high energy needs of a cold winter. But there’s more to those piles than guts.

Travis Booms is a life-long hunter from a Wisconsin family with a strong hunting tradition. He’s also a raptor biologist with Alaska Fish and Game and has studied raptors for more than 25 years. Last year he and his colleagues published research showing that Alaska is home to far more Golden Eagles than previously documented, in fact, about a quarter of the entire US population nests and breeds in Alaska.

In February of this year, the journal Science published a paper co-authored by Booms and other raptor researchers, looking at lead poisoning in eagles. Within days, national publications such as Time, National Geographic, and U.S. News and World Report featured the study. They shared a similar headline: Nearly Half of US Bald Eagles Suffer from Lead Poisoning.

“More than any other scientific paper I’ve been involved with, this one got a lot of press,” Booms said. “We found about half the eagles across the US, including Alaska, are chronically exposed to lead. They are exposed to lead repeatedly throughout their lives.”

National Geographic highlighted the cause in the first paragraph: “The primary source of exposure is ammunition—as eagles scavenge on the carcasses of animals shot by hunters, they can ingest lead fragments from rifle rounds and shotgun pellets.” 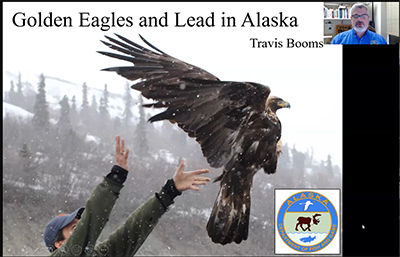 In October 2022, Booms delivered a 20-minute presentation, The Effects of Lead Hunting Ammunition on Wildlife, summarizing the findings and highlighting the Alaska component of the research. He also offered his personal perspective as a hunter who grew up shooting lead ammunition.

Lead is a common metal with many useful qualities. Easy to smelt and work, it’s been used for thousands of years – Romans built vast plumbing networks with lead water pipes. Lead’s chemical symbol, Pb, comes from the Latin word plumbum, as in plumbing. As an additive, lead provided benefits to glass, metal alloys and ceramic glazes, and later, to paint and gasoline. But as early as the mid-1800s, it was apparent that people working with lead suffered higher rates of a variety of medical conditions. As awareness of the adverse health effects grew, its use declined. In the 1970s and ‘80s, lead was banned in paint and gasoline. Lead shot was banned for waterfowl hunting in 1991 because it was killing ducks – and not in the way hunters intended. 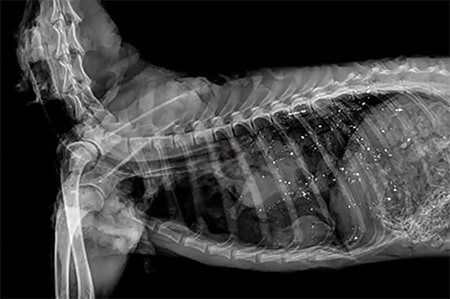 Lead bullets fragment as they pass through tissue, and an x-ray reveals fragments of lead as white specks in the abdomen of this carcass.

Booms said duck hunters had a high incentive to switch to steel shot and lead alternatives.

Ducks were eating lead shot as they foraged in wetlands. And lead is poisonous. High doses are lethal, and sub-lethal doses can cause seizures and blindness. Low doses may sicken but not kill outright, negatively affecting brain and nervous system function, immune response, reproduction, and organ function.

While the effect of lead shot in waterfowl was well-known, the effects of lead rifle ammunition was not. A different, much larger bird helped raise awareness of that.

Lead bullets mushroom on impact – it’s one of their desirable qualities for hunters. The bullet flattens and expands, helping to quickly kill the animal. It also fragments in the process. A lead bullet can lose 15 to 40 percent of its weight as it moves through an animal, shedding small pieces as it travels.

Those fragments are in the gut piles hunters leave on the ground when they field dress a game animal. Bullet fragments also contribute to the lethal damage done to the animal, and hunters trim that chew-up-looking “shot” meat and leave it with the offal. 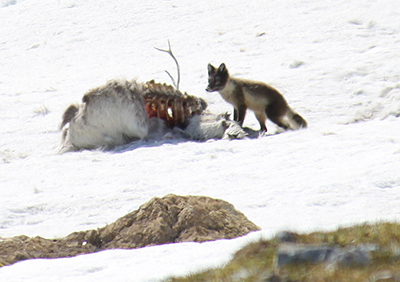 An Arctic Fox scavenges a reindeer. Photo by Arin Underwood.

Along come the scavengers – magpies and ravens, opportunistic chickadees, the usual mammalian suspects, and eagles. And in some places, condors.

A massive vulture with a ten-foot wingspan, the California Condor came to symbolize endangered species in the 1980s when just 27 of the critically imperiled birds were left on Earth. Their demise was attributed to DDT, poaching, habitat destruction – and lead poisoning. While a captive breeding program has brought numbers up into the low hundreds, they are on the brink of extinction. Saving the condor helped draw attention to the issue of lead ammunition in gut piles because it’s still a big part of the problem. Wildlife professionals capture, treat and release affected condors every year to address lead poisoning and keep the numbers up.

“Lead is the one thing inhibiting the recovery of the condors,” Booms said. “If we could get lead out of the system, they’d recover on their own. Lead is their limiting factor preventing the recovery – not habitat or anything else.”

Scavengers aren’t the only victims of lead. Like those ducks, other waterbirds are consuming lead in wetlands, but this lead is not from ammo, it’s from fishing tackle. Lead is killing significant numbers of Common Loons, diving birds that mistakenly swallow lost lead fishing sinkers and jigs. Lead poisoning from tackle is documented in grebes and two dozen other bird species as well. Concern about this source of lead poisoning in wildlife has inspired “Fish Lead Free” campaigns to increase the use of non-lead fishing tackle.

Lead in bones and blood 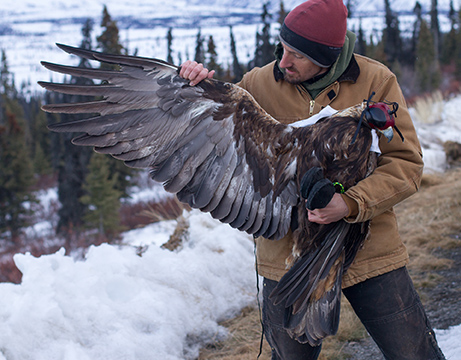 Travis Booms inspects the wing of a Golden Eagle. The amount of white on the primary feathers on the underside of the wing offer insight into the maturity of a juvenile Golden Eagle. Blood samples from 44 juvenile and adult eagles (and 22 nestling chicks) in Alaska were contributed to the national study.

Like many elements, lead is present in minute amounts in the environment, and these background levels are detectable in nature, and in animals. Those levels are not a health risk. The background level of lead in an eagle chick in Alaska is about 0.1 parts per million.

If an eagle ingests a sub-lethal amount of lead, a speck in a gut pile for example, that will be detectable in the blood – maybe in the range of 0.3 to 0.6 parts per million. This is considered lead poisoning, but sub-lethal. That spike will be detectable for about a month, then it’ll drop off. Over time, with repeated exposure, lead accumulates in bone at measurable levels.

In the national study, researchers looked at lead levels in the bones of dead eagles, and in blood from live eagles. Close to 1,200 samples were taken from Bald Eagles and Golden Eagles in 38 states across the country.

Booms and his colleagues contributed data from 66 Golden Eagles in Alaska to the national study. They sampled 22 nestling eagles from the Nome area of western Alaska and 44 subadult and adult Golden Eagles from the Gunsight Mountain area of Southcentral Alaska, sampled during the spring migration. 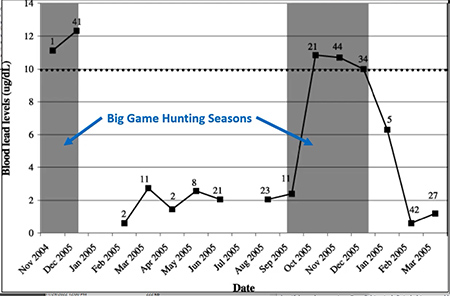 This graph shows the spike in lead blood levels in ravens during two hunting seasons. Lead is detectable in blood for about a month after it is ingested, and it accumaltes in bone tissue over a lifetime.

“In the Alaska study, 16 percent of the adults and subadults had levels consistent with lead poisoning,” Booms said. That’s in that range of 0.3 to 0.6 parts per million. Two birds were particularly high – one was at the lethal thresh-hold and another was above it.

None of the nestlings had lead poisoning. That’s not a surprise since they haven’t had a chance to scavenge gut piles.

The recent paper in Science was sobering, but not a complete surprise. Earlier studies showed that eagles in North America have elevated lead levels in their blood, bones, and liver. Lead can enter the environment from smelting, lead paint, leaded gasoline or bullets, and those sources all have identifiable molecular signatures. The signature of the lead in the eagles has a match.

“We can pretty confidently say where the lead is coming from, and it’s lead ammunition,” Booms said.

The timing of blood level spikes in scavengers also supports this. One example is a 2008 study examining lead levels in ravens scavenging hunter-killed large ungulates - 302 blood samples were taken from ravens over a 15-month period, spanning two hunting seasons, November 2004 to March 2005. About half the ravens tested during hunting seasons exhibited elevated blood lead levels. Outside of hunting season, just two percent of the birds showed elevated levels.

What can be done? 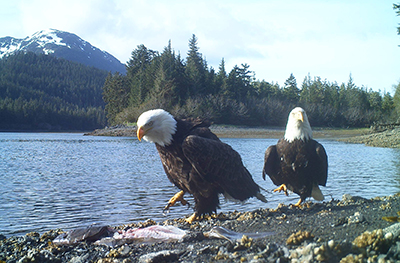 Many hunters have switched to non-lead ammunition. Copper is a popular alternative. It doesn’t fragment and if it does a little, copper is far less toxic. The bullets expand effectively, but in a far more consistent fashion. Booms has seen this first-hand. He’s been shooting copper for close to 20 years.

“When I first started hearing about the effects on condors, around 2000, I was a raptor biology student,” he said. “I was reloading myself and I got pretty heavily into ballistics – that was before you could get copper ammo, you had to buy the bullets and reload yourself. They are much more available now, all the major manufacturers are producing copper bullets now.”

Booms has harvested moose and caribou with copper bullets, and in his view they are better than lead. “They are consistent,” he said. “Every single copper bullet I pull out of an animal is identical. Lead mushrooms different every time, I’ve never pulled out two bullets that look the same. When I pull copper bullets out of animals, they look the same every time. I have them right here on the windowsill, and they look the same whether they hit a bone or not. And I almost always recover them on the inside of the skin on the other side of the animal. It’s crazy how consistent it is.” 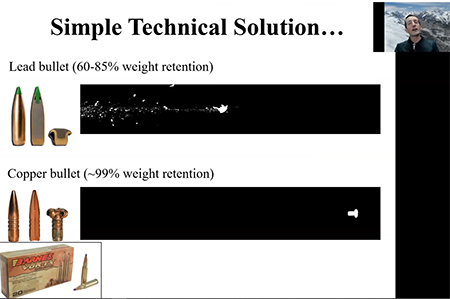 This photo show the shot track of lead and copper bullets. Ballistics gelatin closely simulates the density and viscosity of animal muscle tissue and provides insights into how bullets mushroom and fragment as they penetrate. The white specks in the top image are lead fragments.

This is a personal decision that is not available to everyone at the moment, given the recent ammunition shortage. Ammunition can be hard to come by in Alaska, copper-based even more so, and can be more expensive - similar in price to higher quality lead ammo. But it’s food for thought.

“I think it’s important that we as hunters recognize that if we use lead bullets, wildlife is likely ingesting it,” said Booms, “And some of them are likely becoming poisoned by it, including Golden Eagles and other scavengers.”

Good News about Golden Eagles: Alaska is Home to a Quarter of the US Population