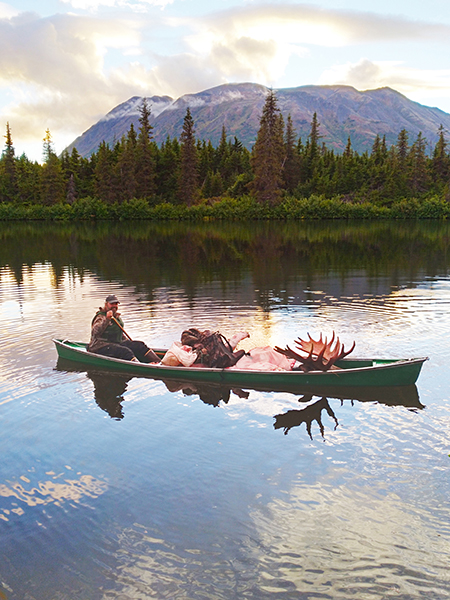 The cover of the current Alaska Hunting regulations features this photo submitted by Ray Davis. Ray’s buddy Jim Kazen harvested the moose on a hunting trip on the Kenai Peninsula. Their friend Keith Snarey took the picture of Ray paddling the loaded canoe as Keith and Jim walked out along the lake. Ray wrote, “One load, with the whole moose and all our gear!”

As Ray Davis carefully paddled the heavily loaded canoe into the lake, his buddy Keith Snarey took what would be the cover photo for the 2022-2023 Alaska Hunting Regulations.

Every year, hunters, wildlife watchers, trappers and anglers contribute photos to Fish and Game, emailing those much-appreciated jpegs with a permission statement and a description. The Division of Wildlife Conservation prints hunting photos in the hunting regulations, and others are used on our website and in educational outreach materials. Pictures that convey the hunting experience are particularly welcome: hiking in, scouting, stalking, working a bird dog, setting decoys, boating, camping, field dressing, and packing out game.

Davis had harvested his moose the day before and came back out to help his friends. “We hunt the same area together year after year,” he said. “We share the work together, and we divide up the meat.”

Ray and Keith’s photo captures the hunting experience. Where a “trophy” picture emphasizes the animal, a picture like this highlights the trip. It’s clearly a hunting trip, and a moose was harvested, but the game bags say as much or more than the rack does. The sunset, the rippled water and the landscape remind us why we hunt with more resonance than a picture of someone with an animal on the ground. 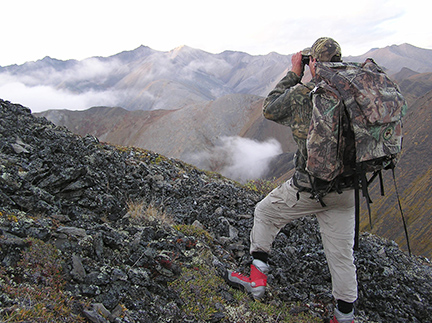 The aesthetic of hunting and fishing photography has changed in recent years. Instead of an angler thrusting a fish broadside at the camera, she’s kneeling in the shallows, releasing it. Hunting pictures include friends and family together. The landscape and surroundings are featured, giving context. Other states and Canadian provinces include hunter-donated photographs in their regulations, but most no longer include trophy shots. Instead, wildlife is featured in natural settings, and hunters are shown engaged in hunting activities.

The Illinois Department of Natural Resources provides advice on “How to take harvest photographs” and encourages hunters to take photographs, “…that respect the animal and convey hunters as the conservationists they are.”

Suggestions include: set up your photo to convey a story about the hunt, not the result. Take photos of cooking the meat and other beneficial uses of the animal. Conceal wounds, and put the animal’s tongue in if it is sticking out; don’t pose kneeling, stepping or sitting on the animal; and avoid laying a bow or firearm on the animal. 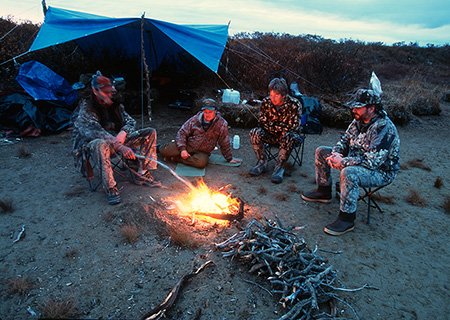 At the Alaska Department of Fish and Game, Natalie Weber oversees the hunting regulations for the Division of Wildlife Conservation. She’s evaluated hundreds of photos over more than a decade and shared what makes a good hunting photo, and things that sabotage an otherwise good picture.

Two issues in particular stand out – file size (quality setting) and the depiction of firearm handling.

“The regulations are printed on newsprint, and we print 135,000 copies,” she said. “The process is not like getting a picture printed (to hang on the wall). We need to have pretty high quality in order to print the pictures on that type of paper – so we want bigger files.”

The camera or phone might well be set to take sufficiently high-quality pictures, but the image is diminished when it is transferred. “When you take a picture on your cell phone and email it to yourself, use the largest file size or the highest quality setting,” she said.

Sending the picture “Actual size” is ideal. Even the “Large” setting can reduce the file size by half. In some cases we’ve contacted the photographers hoping that a 50 KB picture sent by email might be on the phone or camera at 2 or 3 MB (or larger) – and sure enough, the original is print quality. 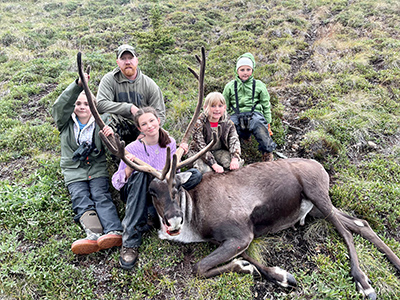 Emily Weaver harvested her first caribou in August 2021, from the Fortymile Herd. It was a family trip with sisters Chevelle, Prestlie and Stormy, and parents Sierra Weaver and Huntre Lamb.

The other big issue is the appearance of firearms safety. “We can’t use a photo if the muzzle is pointed toward a person,” Weber said. “Even if it really was safe, if the camera angle makes it look like the firearm might be pointing at a person, we can’t use it. Unfortunately, this year that eliminated a lot of really good photos. I have no doubt it was safe, but I can’t use it.”

She recommends taking the firearm out of the photo completely. She considered one photo she said was excellent – a family gathered with a young hunter and his moose – but the rifle had been laid across the moose and looked to be pointing at the person on the end. “These photos are scrutinized like you wouldn’t believe,” she said. “We have to err on the side of caution.”

In addition to its obvious merits, Weber said Ray Davis’ photo was very good for subtle reasons that jumped right out. He’s wearing a life jacket. There are game bags full of moose meat clearly visible in the canoe – as well as the rack. His baseball cap does not obscure his face and you can see his expression. 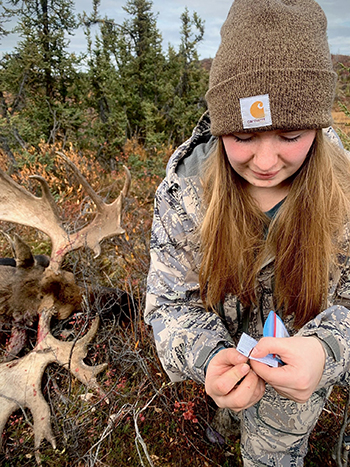 The bill of a cap often blocks a person’s face, or casts a shadow that obscures it. “We receive fantastic pictures of people but you can’t see their faces,” Weber said. “If we have to pick between a smiling face or a face in shadow, we’ll take the one where we can see the person’s face.”

Camouflage is another issue. “We really appreciate the pictures that people send in, and the picture might capture a nice memory for the person that was there, but often everything blends together. You’re standing there in full camouflage with an animal that’s on the ground against a matching background. There’s no contrast, and everything blends together. It doesn’t print well.”

She suggests taking off a camouflage jacket for the photo.

When photos are submitted, in addition to written permission to use the picture, we need information to write a caption. It’s surprising how much detail a hunter/photographer will share about the firearm, its family history, the bullets, and the distance at which the animal was shot – and then forget to include the name of the subject in the picture. For a variety of reasons, firearm and shot details are not included in captions. 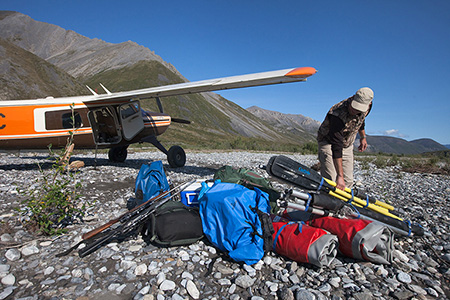 Tim Bowman is dropped off for a rafting sheep hunt in the Brooks Range.

“We appreciate receiving information for captions – anything that invites the reader into the experience,” Weber said. “How the young person with a trophy moose got that big moose -- they went 200 miles downriver and spent three weeks with their family hunting for this.”

While hunters contribute most of the photos for the hunting regulations, we are very interested in photos of smaller and often overlooked animals. In July we needed photos of red-backed voles, sunflower sea stars and a silver-haired bat. We use photos for our online species profiles, education and outreach, and there have been many occasions when an unanticipated need was preceded by an overlooked opportunity. More on this at the end.

Photos can be emailed as jpegs with information about the hunting trip and a sentence granting Fish and Game permission to use the photo. A permission form with details is available with the contact information at the end of the article.

Fish and Game uses trapping photos in the trapping regulations booklet, and photos donated by trappers are appreciated. Since the trapping booklet is printed in black and white, crisp images with good contrast are especially important. 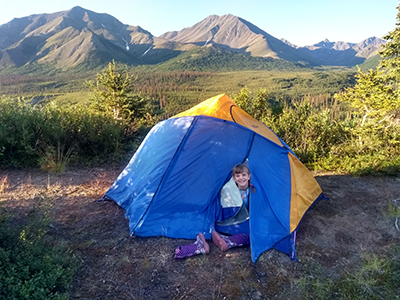 Kavina Baumeister at spike camp on a caribou hunt. Kavina, 12, harvested a caribou west of the Susitna River in the yc 495 hunt in August 2021. Photo by John Baumeister

Photos of wildlife and wildlife viewing are also welcome and useful. The following topics represent gaps in the Fish and Game photo archives, and any contributions would be greatly appreciated. Arctic Hare, Arctic Marmot, wildlife by the Alaska pipeline, furbearers of all kinds, hunters using 4-wheelers, horses or bikes, small mammals – especially lemmings, voles & mice. Fish (other than the popular commercial and sport species) like blackfish, cisco, whitefish, sharks, etc. Any “unusual animal sightings” (including mule & white-tailed deer) as we are documenting expanding wildlife ranges, invasive and introduced species.

This Wildlife Conservation Division Photo Submission Form (PDF 149 kB) includes information on how and where to submit your images.