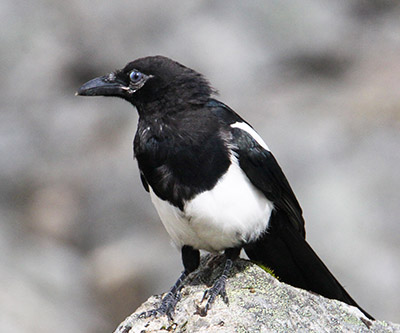 It was late summer in Hatcher Pass, and I was hiking through the lichen and moss-covered scree slope, glancing up occasionally at the high whistle of a hoary marmot or the indignant squeak of a collared pika. When these squeaks were interrupted by the more familiar caw of a Black-billed Magpie I fumbled for my camera, I was always after magpie feathers in the sun, when the light made their iridescent blue and green plumage glow.

I sat on a comfortable mossy seat and watched the Magpie hop from rock to rock. Then to my surprise it flew towards me and landed on a rock only a few feet away. I could see from there that it was a juvenile, with a scrawny looking awkward teenager face and pin feathers about its eyes and beak. Upon closer inspection I could also see that its eyes were not the familiar reddish dark brown of the adults but a clear sky-blue color, something I had never seen before.

Bird eyes seem to come in an incredible variety in Alaska, from blue and brown-eyed Black-billed Magpies to the red-eyed Goshawk and Common Loon. Many sea ducks have yellow and white eyes and the wetland summertime resident, the Rusty Blackbird, is easily spotted for its pale-yellow eyes. How do bird eyes work? What can they see that we can’t and what possible explanations could there be behind the large variety in bird eye color across species?

The World Through a Bird’s Eye

Bird eyes are incredibly well adapted and varied, and their vision can be very different from ours. While human eyes have three different types of color receptor cells (or cones) that can detect red, blue, and green light, birds have an extra one that allows them to see ultraviolet light. They are also thought to be able to detect even more variation in color though oil in their cone cells. This ability to distinguish so many colors can be useful in finding both mates and food. Birds can detect ultraviolet light reflecting off urine trails of rodents and so track their prey better, they can distinguish fruits and ripeness, and see more color variations and patterns in other birds, potentially judging health and age. Under UV light, some bird beaks and feathers even glow, with some owl’s plumage appearing in bright pink patterns that correspond to age. How would this look to a bird’s eye? We can only speculate, but it offers interesting food for thought in just how colorful and uniquely informative the world looks to a bird. 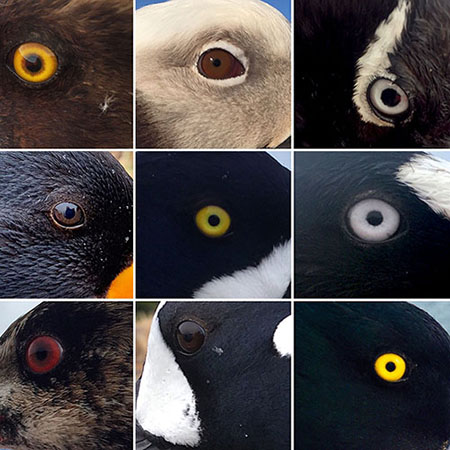 Colors aside, birds’ unique vision is also theorized to be crucial in their ability to navigate during mass migrations across oceans and continents. Bird use stars to navigate, but it now seems that they can also, in a sense, see the Earth’s magnetic fields. Their eyes have a type of protein that may allow them to see compass directions as potentially darker and lighter. Pairing this visual sense of direction with magnetite (a magnetic mineral) sensors in the beak that can gauge magnetic field strength, and birds can navigate across the world, with Alaskan bird species traveling between all seven continents.

Additionally, to help protect birds’ eyes, they have what is called a nictitating membrane, a third eyelid. They have upper and lower eyelids like we do, and a third transparent one that moves horizontally across the eye and act like goggles, keeping their vision clear of dust and protecting diving birds’ eyes underwater. This can be seen sometimes as birds blink and a film appears to move briefly across their eyes. I saw this eyelid quite clearly as I observed the juvenile magpie in Hatcher Pass from up close. 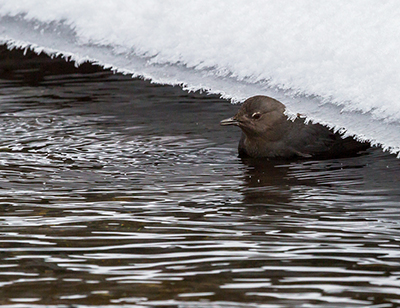 Speaking of eyelids, the American Dipper, a round gray bird I’ve spotted cavorting about the icy streams of Portage Valley, deserves an honorable mention for its unique eyelids. Despite the ice at the river’s edge, I saw several American Dippers shooting in and out of the Portage rivers, blending in well with the dark rocks and water. But closer inspection shows a flash of white on their eyes, perhaps a nictitating membrane? It is actually the dipper’s eyelid! Which is covered in delicate white feathers and revealed as the little bird slowly blinks. The purpose behind these white eyelids is not known but is perhaps some form of communication to other dippers.

Why do Bird Eyes Change Color?

That blue-eyed magpie I saw was also most likely a juvenile because of its blue eyes. Young magpies often have sky-blue eyes that turn reddish brown as winter approaches. This eye color by age is not unique to magpies and can be seen in Bald Eagles, Goldeneyes, and Scaups as well. These specie’s eyes moving from brown to yellow as they achieve adulthood. Another striking example is the Northern Goshawk, common in coniferous forests, whose juveniles start with green-gray eyes that turn to bright yellow for their first year, orange for their second, and then to dark red for the remainder of their adulthood. 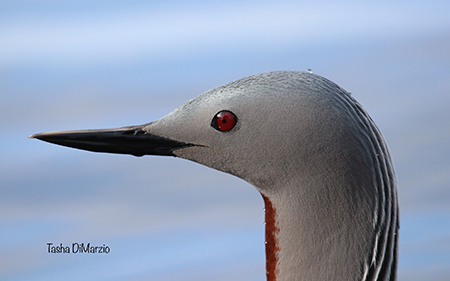 One theory for these eye color shifts is to signal maturity to other birds and thus mating availability. It can also aid birdwatchers as they attempt to identify immature and adult plumage birds.

Loons are a well-known waterbird in Alaska whose bright red eyes contrasts against black and white feathers. They are primarily diving birds who hunt for fish underwater in freshwater lakes and ponds. Given this behavior, one possible reason for their bright red eyes is to aid in their vision underwater. As most diving birds do not have red eyes however, another explanation could be that the bright color functions to attract and signal potential mates. This is supported by the eye color changing as birds mature as well, young loons have a duller eye color.

What about yellow? Many Alaskan owl species sport bright yellow eyes, the Snowy Owl, Great-horned Owl, Saw-whet Owl, the Hawk owl. Why would they have striking yellow eyes while another species, such as the Barred Owl, have dark brown eyes? One proffered explanation is related to their behavior. Yellow-eyed owls tend to have diurnal (as opposed to nocturnal) habits, they are active for portions of the daylight hours. Perhaps nocturnal owls sport dark eyes to assist with camouflage in the dark. The yellow-eyed Saw-whet owl though is a nocturnal bird, so maybe the answer is not so straight forward. 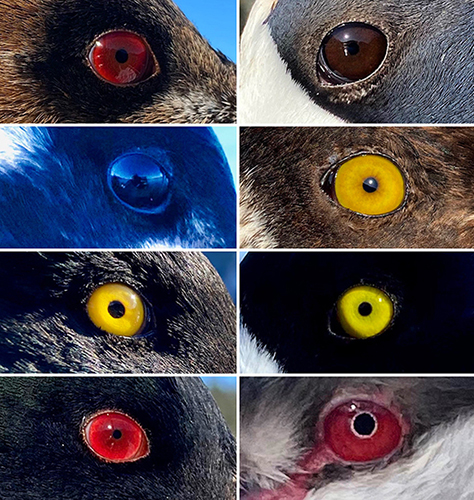 There is no clear explanation for the many variations in bird eye colors, but it may well be anything from bird size, feeding ecology, communication, or breeding behavior. Smaller bird species seem to be more dark-eyed while larger species have light eyes. This can be seen in the many brown eyed songbirds and the colorful eyes of birds of prey and waterbirds. Eye colors have also been shown to function in communication between individuals, bright eyes displaying presence in nesting locations and deterring competitors. Vibrant eyes can also signal information about age and health to potential mates.

Whatever the theory or true explanation, bird eyes have incredible functions and colors. Given most bird’s flight abilities, vision can be their most valuable resource as they dive between narrow branches, underwater, through raging rivers, hit breakneck speeds, and pursue insects and other prey species from far away and high above. They have built in goggles and binoculars, can see underwater, can detect unknown new colors, and can see the very magnetic fields of the planet. 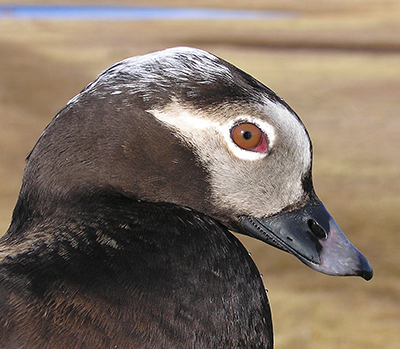