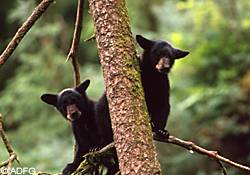 Black bears are good climbers and problem-solvers. They are attracted to bird feeders and bird food and will tear down feeders to get at the seeds. Bears will also shake trees to empty feeders or knock them down.

Mary DeSmet was on the phone when she saw the bear through the kitchen window, headed for the woods. She wasn’t alarmed at first - then she noticed he had her bird feeder in his mouth.

“It was at noon in broad daylight,” she said. “I had that suet feeder seven feet high off the ground, but it was obviously not high enough. He shimmied up the pole and tore it down”

That was the first time the Juneau bird lover had a bear tear down a bird feeder. After 25 years in the Mendenhall Valley, DeSmet was no stranger to bears. She had learned through experience to be careful with her garbage. In the early 1990s she discovered the joys of feeding and watching birds in her yard. Years passed without bears showing any interest in her feeders. But when that changed, it changed completely.

“I don’t know what happened - something changed and they got tuned into bird seed,” DeSmet said. “Feeders didn’t draw bears at first. Then about six years ago I noticed bears were more interested in bird feeders. That’s when I had my first encounter.”

After her second encounter she put away the feeders in the summertime. That was night-time raid on her other feeder, the one loaded with black oil sunflower seeds.

“I thought it was high enough, but the bear was able to break it off the stand,” she said. “It was full and it was literally ripped to shreds – a $50 feeder totally destroyed. There wasn’t a seed left on the ground. The bear ate every seed.”

Wildlife biologist Rick Sinnott of Anchorage said bears will probably eat anything birds will eat at a feeder. The fact that so many of the foods provided at birdfeeders are high in fat and protein is a bonus for bears.

“Why wouldn't a bear love to eat suet, peanuts, and oily sunflower seeds,” he said.

Sinnott recommends that in the summertime, folks living in urban bear country put away bird feeders and enjoy birds in other ways. Replacing feeders with nest boxes and birdbaths are good examples.

“Several cavity nesters will use nest boxes and many songbirds are attracted to a shallow bird bath, especially with dripping water,” he said.

Alaskans have realized in recent years that bird feeders are serious bear attractants. Fairbanks wildlife biologist Dick Shideler, with the Alaska Department of Fish and Game, said the birdseed and bear issue is also a growing problem in Northwest Montana and British Columbia. 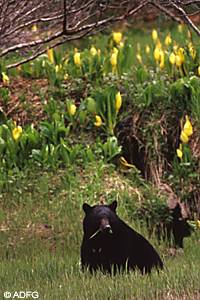 Bears - and birds - have plenty of wild food available in summer and should eat natural foods. Take down bird feeders in mid-April to keep bears out of your yard.

“It is surprising to a lot of people that feeders are a problem,” he added. “The same person who has his garbage safely stored in the garage has another attractant right there on the porch. And that gets bears in even closer contact, right next to the house.”

Shideler recommends people quit feeding birds in mid-April. Natural food is more available to birds by then, and bears are emerging from their dens. Biologist Neil Barten of Juneau said late March is the best time to quit feeding in Southeast, and in the fall folks should wait until early November to begin feeding again.

Folks should also thoroughly clean the area. Seed spilled on the ground is still an attractant, because the oil-rich seeds have persistent odors.

Polly Hessing, a wildlife biologist with Alaska Fish and Game in Juneau, estimated that a quarter to half the calls in recent years have been bird feeder and birdseed related. She said Juneau has made big strides dealing with the urban bear issue, but the vigilance in many areas has caused some bears to work harder and look elsewhere.

“Bears don’t just like to eat things, they like to investigate things and manipulate things,” Hessing said. “They’ll tear down an empty feeder, investigate empty boxes and empty pet food bowls. They are nosing around, looking for something to eat, and if they don’t find food, they’ll still look around. If they do find food, it’s a reward and really increases the chances they’ll return.”

Hessing said in some ways, bears and dogs think alike. Positive reinforcements such as food make a big impression.

“It’s much harder for bears to unlearn than learn,” Hessing said. “Bear studies show it’s difficult to change their behavior. This is straight out of classical conditioning, B.F. Skinner. Animals try really hard before they give up. We’re the same way. The bottom line is don’t get them started.”