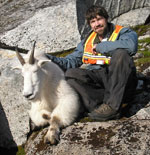 “I've never heard of anything like this happening,” said Kevin White, a wildlife biologist with the Alaska Department of Fish and Game.

I'm perched in the open door of a Hughes 500 helicopter, pouring water from a 30-gallon bucket filled with fingerling rainbow trout. The rotors are whipping up the water of Craig Lake, but the fish seem to make the 20-foot fall just fine. Over the helmet intercom the pilot asks if the fish are off okay. I peer out the door and report that a few are flopping on the skid plate. The next thing I know we're at a 30-degree angle and the fish slide off into the water. The only thing keeping me from ...   Interior Biologist ArticleContinued

Have you ever wondered what bears do when they hibernate, how wood frogs freeze solid or how far caribou migrate? Email your questions concerning wildlife to ADF&G educator Elizabeth Manning (elizabeth.manning@alaska.gov) and she will try to find an answer from an expert. Each month, Alaska Fish and Wildlife News will highlight one of the inquiries. Here is this month's question, and answer:

For the past four years, Alaska Department of Fish and Game non-game biologist, Matt Kirchhoff has been researching murrelets to better understand ...   Murrelet Watch ArticleContinued

“It's extraordinarily addictive,” she said. “It's wonderful to make ahead of time. You can make it, put it in the fridge and serve it three days later. You can carry it in the mold and flip it over when you serve it. We take it to recitals, parties and potlucks and people absolutely love it.”

“It's a modified recipe from the back of an unflavored gelatin packet,” she said. She experimented with the basic recipe, added a few ingredients ...   Crab Pate ArticleContinued