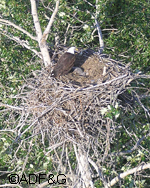 It's a pretty specific window of time; in the spring, before leaf out, with no snow on the trees but still snow on the ground, and preferably snow remaining in the bowl of the nest. Those are the parameters for counting raptor (birds of prey) stick nests from the seat of a low flying Supercub. And it works!

Over the past couple of years Alaska Department of Fish and Game nongame biologist Jack Whitman and Interior Refuges Manager Jason Caikoski have teamed up on a study in the Minto Flats ...   Counting Raptors ArticleContinued

Managing Alaska's moose populations requires more than understanding moose. Moose habitat – and the factors that influence how moose use their habitat – are also important. Wildlife biologist Tom Paragi of the Alaska Department of Fish and Game is assessing moose habitat in Alaska and is developing new tools to help wildlife managers and the public understand habitat capability for moose in the Interior.

From his base in Fairbanks, Paragi is outlining the suite of habitat factors that affect ...   Moose Habitat ArticleContinued

Biologists with the Alaska Department of Fish and Game recently launched a long-term study to find the best method to determine the age of Dolly Varden. This fall, the first phase of this project began with the collection and fertilization of ...   Old Fish ArticleContinued

Public Input to Fish and Game Policy:
The Joint Board 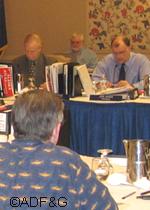 The Joint Board plays an important role at The Alaska Department of Fish and Game and in the next year the group will be addressing important issues regarding the advisory committee system in Alaska.

Advisory committees are the grass roots organizations that discuss fish and wildlife management and provide recommendations to the boards on changes to the regulations. There are 81 committees throughout Alaska, each with expertise in the surrounding area.

The first Alaska State ...   The Joint Board ArticleContinued 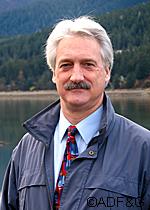 For Alaskans it begins right in our constitution. “Fish…belonging to the State…shall be utilized, developed, and maintained on the sustained yield principle,” and like all other natural resources, “…for the maximum benefit of its people.” The fight for Alaska's statehood was centered on the need to rebuild Pacific salmon runs and to protect fishermen and communities along our lengthy coastline. Fifty years later we enjoy record-setting harvests and, for the most part, continued social and economic ...   Sustainability ArticleContinued