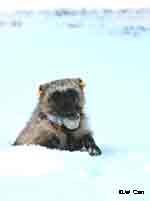 Cruising down a streamside trail on Chichagof Island, a big brown bear puts his head through a snare. The light wire breaks after snagging a clump of woolly brown hair. That bear doesn't know it, but he's been captured as far as wildlife biologist Grey Pendleton is concerned.

In Interior Alaska, a set of fresh wolverine tracks winds across a snowy slope in the calm of a clearing storm. Looking at the tracks, most people would simply infer that a wolverine passed by. But wildlife biologist ...   Bears and Math ArticleContinued

Alaska Fish and Game biologists are happy to answer questions, but sometimes there's a better way than fielding dozens of phone calls.

“Tom Paragi came up to me and said, ‘Every year I get bombarded with questions about grouse and ptarmigan by small game hunters. Can we get something out ...   Alaska's Grouse ArticleContinued

Delicious on a cold evening after a day on the trail, or a wonderful first course to a full traditional meal of several courses.