A herd of about 400 wild, free-ranging plains bison roams the countryside near Delta Junction in Interior Alaska. About 16,000 hunters apply each year for the chance to hunt these massive beasts, and only 130 people received permits last year. Smith was one ...   Alaska Buffalo Hunt ArticleContinued

There are a lot of misconceptions about bears. “Grizzly bears can't climb trees,” or “bears can't run downhill” – both untrue. One common misconception is that bears have poor eyesight. The reasons behind this misconception are understandable, but evidence indicates that bears' eyesight is comparable to ours.

Reynolds is a bear biologist for the Alaska Department ...   Bears' Vision ArticleContinued

After learning to associate food with color, bears were ...   Do Bears See Color? ArticleContinued

The first burbot I ever saw was preserved in a bottle of formaldehyde. It was the same monotone, gray-brown color of the dozens of specimens in jars that had come before it. I was unimpressed. It's hard to have much feeling for something that smells that putrid and looks that bad. Not only that, I was cramming for an ichthyology exam and didn't have time for the luxury of appreciation.

A year or two later, I tagged along with a friend to check his burbot setlines on the Tanana River ...   Burbot ArticleContinued 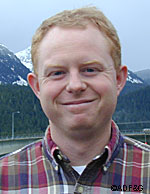 The top of the net stays on the surface ...   Know your Boats ArticleContinued

Trawlers are sometimes confused with trollers due to their similar sounding names, but there are few similarities. Trawlers typically catch large quantities of midwater species, such as pollock or pink shrimp, and bottomfish, such as flounder, by towing a large, cone-shaped net. Most trawl nets have “doors” on either side of the net's opening to help hold it open, and some that are fished near the bottom have a heavy chain strung along the bottom of the opening to hold it close ...   Know Your Boats ArticleContinued