March is National Women’s History Month, inspiring us to highlight women in Alaska. This issue of Alaska Wildlife News features stories about women at Fish and Game, women in science, Alaska outdoorswomen and more.   View article

Like any veterinarian, Kimberlee Beckmen sees a lot of animals. But for Beckmen, the wildlife veterinarian for the Alaska Department of Fish and Game, it's not dogs and cats, but bears, moose, birds and other wild animals.

Unlike most vets, a number of Beckmen's patients have already expired. Beckmen is frequently called upon to determine the cause of death of different birds and mammals, or to investigate parasites and unusual tissue found in harvested game animals.

“A lot of ...   Wildlife Vet ArticleContinued

A project involving bear hunters, antibiotics and barbed wire has provided revealing insights into one of the world's densest populations of black bears, on Kuiu Island in Southeast Alaska. 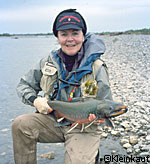 “At my age you start to look back over your life and think about what you wish you could change - I have few regrets; one is that I didn't learn to fly fish earlier.”
-- Cecilia “Pudge” Kleinkauf


Cecilia “Pudge” Kleinkauf learned to fly fish at 40; since then she has grown more passionate about sportfishing.

“Pudge” is an inspiring, dynamic woman. I get the feeling that when she sets her hook into something, she is unstoppable in pursuit of her goal. She's full of ...   “Pudge” Kleinkauf ArticleContinued

A Chat with Stephanie Madsen 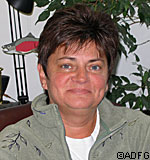 Stephanie Madsen is one of the most powerful leaders in the commercial fishing industry today. In this male-dominated world, she holds two very prestigious positions; she is vice president of the Pacific Seafood Processors Association (PSPA)and chairwoman of the North Pacific Fishery Management Council (NPFMC).

Editorial:The Evolution of Women's Roles at ADF&G
“Is the glass ceiling made of fish scales?”

When I began working for the Alaska Department of Fish and Game as a secretary in 1983, it was easy to see that the place was a male-dominated department, with men holding the greater majority of top level positions. As I asked friends for advice on how to advance my career and myself, I received opinions such as “deepen your voice,” and “think in sports analogies.”

Although those suggestions seem silly today, it is still true that the department is falling short of taking full advantage ...   Editorial: Women ArticleContinued

In 1990, Dr. Christine Thomas was sitting at a campfire with a group of friends, wondering aloud why they didn't see more women outdoors. Thomas, a professor of Natural Resources at the University of Wisconsin Stevens Point, decided to find some answers.

The question led to a symposium in Wisconsin with guests from many other states. They itemized the barriers to outdoor activities perceived by women. Two thirds of the barriers listed related to the fact that once they got there, most ...   Women Outdoors ArticleContinued