In 1930, congress gave the U.S. Biological Survey $40,000, “To acquire a herd of muskoxen for introduction into Alaska with a view to their domestication and utilization in the Territory.”

It was a resounding success in one regard, as the introduction of those muskox re-established wild populations in Alaska. Today, thousands of wild muskox roam the arctic and western Alaska thanks to that acquisition. But what about their “domestication?” 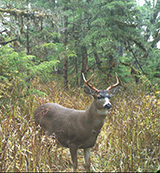 Scientists now have a new — and improved — model for predicting winter habitat use by Sitka black-tailed deer on Prince of Wales Island, laying the groundwork for wildlife management, habitat restoration efforts, and applications for future use in other areas of Southeast Alaska’s rainforest. 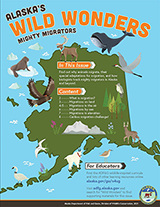 You are a caribou herd, migrating over the course of the year. You must forage, escape predators, swim rivers, survive hordes of insects, weather storms, and always keep moving. Will your numbers grow or shrink? How many of the herd will survive? How many calves will be added during calving season?

A one-year foray into the life of migratory caribou became an interactive activity on the back page of the most recent issue of Alaska’s Wild Wonders, the annual magazine designed ...   Wild Wonders Article Continued