One of the most popular islands to hunt for Sitka black-tailed deer in all of Southeast Alaska — Douglas Island — is also the site of a new three-year pilot camera project aimed to help biologists and wildlife managers with the Alaska Department of Fish and Game get more precise information on how many deer and of what age classes are using the habitat. Similar studies are being launched on Mitkof and Gravina islands, also due to their popularity among hunters. 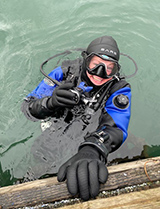 Alaska Department of Fish and Game fisheries biologist Kellii Wood (based out of Petersburg, Alaska), recently teamed up with a local outdoor school, Kinder Skog (director Katie Holmlund) for their Outdoor Recreation Creation Adventure (ORCA) marine science camp that ran from July 12 to July 16, 2021. The focus of the camp was to bring Alaskan fisheries awareness, biological sampling skills, and hands on science to 16 children; ages ranging from 9 to 12 years old.

The goal was to expose ...   Diving for Science Article Continued

ADF&G’s Library:
It’s always been there but it’s always evolving!

By Celia Rozen and Jon Henley

In the 62 years since Alaska became a state, the Alaska Department of Fish and Game has always had a library and a librarian. For more than half of those years, Celia Rozen has been that librarian. Her retirement in 2021 marks the continuation of this tradition with the hire of Jon Henley as the next ADF&G librarian.

The ADF&G library moved out of its home in the Anchorage office in 1997, later absorbed the fisheries library at the Juneau office, and joined forces with seven other ...   ADF&G’s Library Article Continued 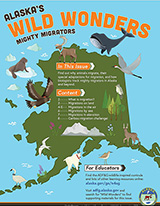 At the Alaska Department of Fish and Game (ADF&G), wildlife educators regularly teach about adaptations. We know that animals change their physiology or behavior to survive in different habitats and circumstances. The varied skillsets and backgrounds of the ADF&G Wildlife Education Program staff make it possible to adapt to the changing circumstances. We are poised to meet audiences wherever they are, which this past year largely turned out to be in their very own habitats or homes.